One of the ocean’s response to global climate change is a rise in average water temperature. Where in the ocean the warming occurs and the rate at which it occurs are of great interest to climatologists. Measuring ocean temperature to monitor and understand changes due to climate change presents some challenges because:

• The ocean is very large.
• The ocean has a lot of variability, for example warm and cold eddies.
• Temperature measurements need to be continuous over time.
• Measures must be taken throughout the water column

Ocean temperature is routinely measured by ships, drifting buoys, and satellites. However, each of these methods has some drawbacks when it comes to monitoring temperature changes on a global scale (see How is sound used to measure global climate change? for more information).

The travel time of sound in water can provide a measurement of temperature over a whole ocean basin (see How is sound used to measure temperature in the ocean? for further explanation). Experiments conducted in the North Pacific Ocean found that the change in ocean temperature can be measured with sound to within 0.001 degrees Celsius per day across thousands of kilometers. This acoustic technique also averages out small variations across the ocean basin. Those experiments were discontinued due to concerns about the impact on marine mammals and the costs to maintain the sound sources. 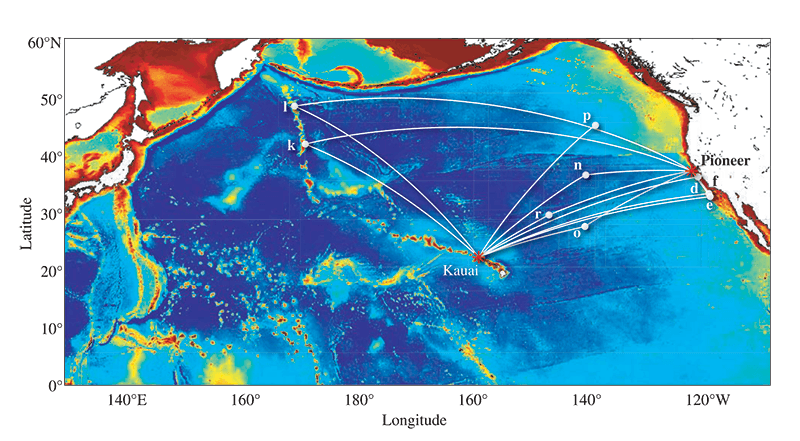 Earthquakes as a Sound Source

Seismic ocean thermometry uses naturally occurring earthquakes as a sound source to measure changes in ocean temperature. The first results using this method were reported in 2020 for a region of the Indian Ocean over a twelve-year span, 2004 to 2016. Earthquakes release large amounts of energy that propagate as seismic waves in the Earth. Seismic energy from earthquakes is converted into acoustic energy, t-waves, at the seafloor-water boundary. The acoustic energy from earthquakes is much greater than any anthropogenic sound source. T-waves have frequencies in the 1 Hz to 50 Hz range and can propagate long distances in the ocean. They are converted back to seismic waves when they encounter land and are recorded by near shore land-based seismometers (see How is sound used to study undersea earthquakes? for more information). 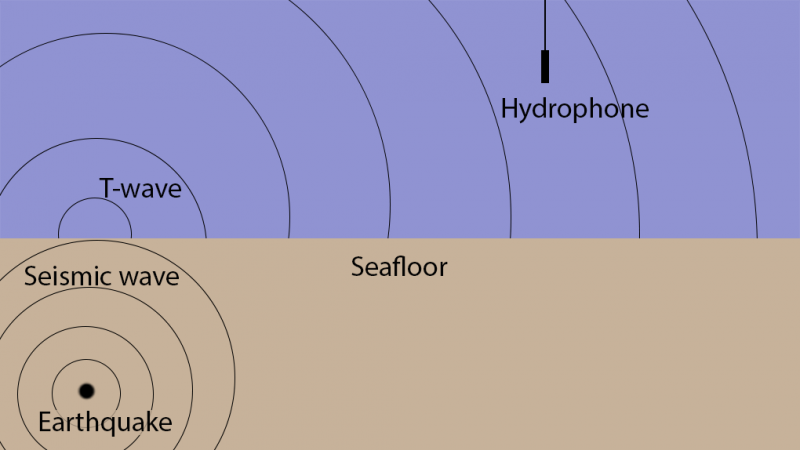 Figure showing the creation of T-waves from seismic waves and detection by a hydrophone. Image credit URI

Most earthquakes cannot be used as a sound source for ocean thermometry, because their location cannot be determined with enough precision. However, a small subset of the world’s earthquakes are generated repeatedly from the exact same location along the same earthquake fault. They can repeat over a range of time scales; relatively short timescales, days to months, to longer time scales of decades and longer. Earthquakes generated from the same location can be recognized because they have nearly identical signal waveforms, and so two earthquakes generated years apart can be recognized as arriving from the same source by observing a high correlation in their signals. The key to seismic ocean thermometry is the use of these repeating earthquakes as the sound source. These types of earthquakes generally occur close enough to each other that any changes in travel time of a signal traveling from the earthquake location to receiver hundreds of kilometers away are dominated by changes in ocean sound speed, and not from the slight differences in earthquake location.

The seismic ocean thermometry results from the Indian Ocean show the same seasonal and annual variation as other temperature anomaly records of the region. In addition, the new record shows a decadal warming trend in ocean temperature, also similar to other temperature anomaly records. When there is sufficient data, as in 2005 and early 2006 in the Indian Ocean study, seismic ocean thermometry can record variation on the scale of days and weeks which is not usually possible with other methods. 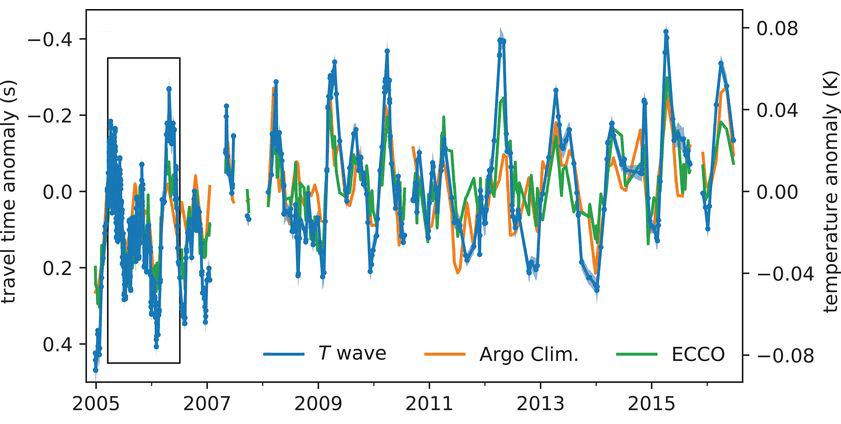 Travel-time anomalies and corresponding temperature changes. Travel-time anomalies (left axes) and corresponding temperature anomalies (right axes) inferred from T waves (blue) compared with those predicted from the Argo Climatology data (orange) and Estimating the Circulation and Climate of the Ocean project (ECCO) data (green). Every blue dot corresponds to an earthquake that is part of at least one repeating pair. Gaps in the time series indicate gaps in the earthquake record. The Argo and ECCO estimates were interpolated to the same times as the T-wave events. Figure from Wu, W., Zhan, Z., Peng, S., Ni, S., & Callies, J. (2020). Seismic ocean thermometry. Science, 369(6510), 1510–1515. Used with permission.

One limitation of seismic ocean thermometry is the timing and location of the acoustic signals. They are completely dependent on how often and where repeating earthquakes occur. This can lead to gaps in the record, as seen in the figure above in 2007 for example. Another limitation is using seismometers on land. This effectively limits the data to earthquakes above magnitude M4. However, using hydrophones to directly measure the sound in the ocean from earthquakes can expand the usable earthquakes to those below magnitude M4, perhaps as low as magnitude M1.8 (See How is sound used to study undersea earthquakes? for more information).

Seismic ocean thermometry has great promise to expand the record of ocean temperature measurements. The demonstration of this method used archived records from three land-based seismometers to calculate the ocean temperature. There is a wealth of archived seismic data from earthquakes recorded at hundreds of seismometer locations that goes back decades in many cases. There are more than 10,000 shallow earthquakes of magnitude M4 or greater each year, so the data set will continuously grow. 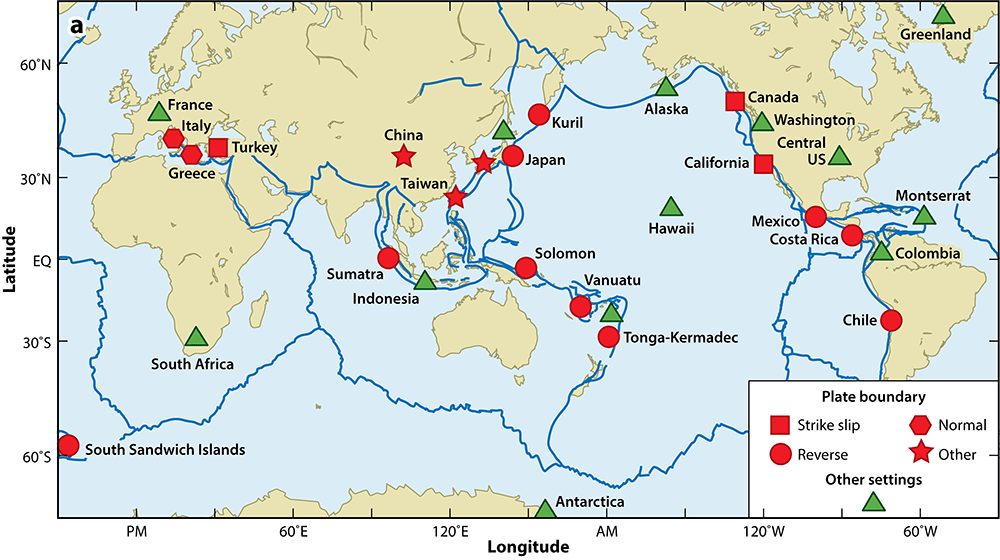 Distribution of observed repeating earthquakes around the world. Multiple repeating eqrthquakes exist at many of the locations. Figure from Uchida, N., & Bürgmann, R. (2019). Repeating Earthquakes. Annual Review of Earth and Planetary Sciences, 47(1), 305–332. used with permission.

Archived recordings from hydrophones, such as those used for the Comprehensive Nuclear-Test-Ban Treaty (CTBT), may be another source of data for seismic ocean thermometry. Drifting buoys with hydrophones onboard to collect earthquake t-wave data have been used to study the geology in specific regions of the ocean. A broader deployment of hydrophone equipped drifting buoys, such as the Argo floats, could further expand the volume of data and reduce gaps in the data leading to more robust temperature measurements.