It is important to understand that the way sound travels is very much dependent on the conditions of the ocean. The sound speed minimum at roughly 1000 meter depth in mid-latitudes creates a sound channel that lets sound travel long distances in the ocean.

Sound is refracted just as light is. Refraction occurs not only when light moves from water to air, but whenever the speed of light changes. Similarly, a sound wave traveling through the ocean is bent whenever it encounters changes in the speed of sound. Since sound speed changes with changes in temperature, salinity, and pressure, a sound wave will refract as it moves through the ocean.

A sound channel exists in the ocean that allows low-frequency sound to travel great distances. This channel is called the SOund Fixing And Ranging , or SOFAR, channel. 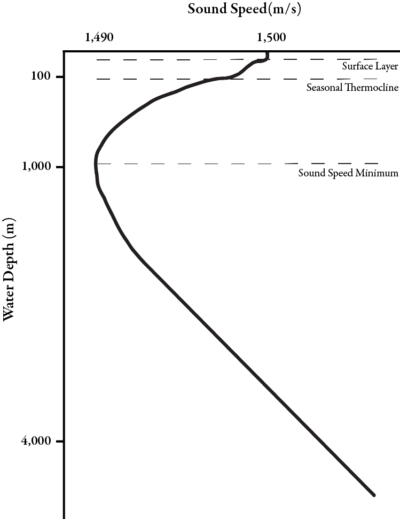