Cuvier’s beaked whale, also known as the goosebeak whale, was first described by naturalist Georges Cuvier. The species can be found in most parts of the ocean and seas worldwide. The average adult is about 5.5 m (18 ft) long and weighs 2500 kg (2.7 tons). Males have two, small cone-shaped teeth erupting out of the tip of the bottom jaw. Photo credit: Robin W. Baird/cascadiaresearch.org.

Beaked whales include at least 21 species in the cetacean family Ziphiidae. They are one of the least known families of large mammals as well as one of the few groups of large mammals for which new species are still being identified. A distinguishing feature for beaked whales is their “beak” (or rostrum), which, in males only, contains 1 or 2 pairs of teeth in the lower jaw. The teeth vary in size and shape, and in some species, may protrude through the upper jaw. The teeth are not used in feeding; rather, males use their front teeth during fights to establish dominance. The bodies of male beaked whales tend to be heavily scarred with markings left behind from these fights.

Beaked whales have extraordinary diving abilities. Blainville’s (Mesoplodon densirostris) and Cuvier’s (Ziphius cavirostris) beaked whales have recorded dives up to 1251 m and 1885 m in depth, respectively. The whales are highly vocal during these deep foraging dives, using echolocation to find their prey, deep-sea squid and fish. Through the use of Digital Acoustic Recording Tags (D-tags) (See also: Tagging Studies), scientists have recorded a variety of vocalizations, including clicks, click trains, and buzzes, during foraging dives. This “vocal phase” lasts 20-30 minutes during each dive. 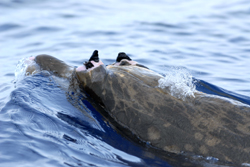 Blainville’s beaked whales (dense beaked whales), are about 5 m (16 ft) long and weigh about 1 metric ton. They are found in tropical/subtropical regions of the ocean worldwide. Their lower jaws are strongly arched, which, in males, house a prominent pair of teeth. These tusk-like teeth actually erupt through the upper jaw (shown here)- this provides a distinctive profile for species ID. Photo credit: Dr. Ari Friedlaender, Duke University.

Researchers have discovered that Blainville’s beaked whales actually produce two distinct click types: search clicks and buzz clicks. Each of the click types occurs during a different phase of the foraging dive. Search clicks are emitted during the approach phase, at intervals of 0.2-0.4 s and a frequency of 26-51 kHz. Since strong echoes are received from these clicks, scientists believe they function to enhance prey detection and classification. When the target is about one body length away (2-5 m), the whale switches to buzz clicks, short bursts of sound at a frequency of 25-80 kHz or higher. Buzz clicks are highly repetitive, and researchers estimate that the whales may click 300 or more times in the last 3 m of their approach to the target.