How is sound used to help make long-term measurements of the ocean?

For the past century, most ocean measurements have been made from research vessels. Small groups of scientists and technicians made measurements during research expeditions lasting for a month or so, and then returned home to analyze the data that had been collected. Although much has been learned about the ocean using this approach, it is not very satisfactory for studying long-term changes, such as those associated with climate change, or short-lived events that occur intermittently, such as undersea volcanic eruptions or severe storms that mix the upper ocean layers.

Scientists are now constructing ocean observatories that use undersea cables to connect instruments to shore. These new observatories are designed to make long-term, continuous measurements for decades. They will be used to study biological, chemical, physical, and geological processes in the ocean, at the seafloor, and at the boundary between the ocean and the atmosphere. These measurements of ocean properties are similar to the long-term, continuous measurements of the atmosphere that have long been provided by weather stations around the globe.

The undersea cables are similar to those used to carry telephone calls under the ocean. They provide power to the instruments, transfer data from the instruments to shore, and allow scientists to send commands to control the measurements that the instruments make. This approach is similar to using underground cables and a cable modem to connect home computers to the Internet. The cabled observatories essentially extend the Internet far offshore, into the deep ocean. 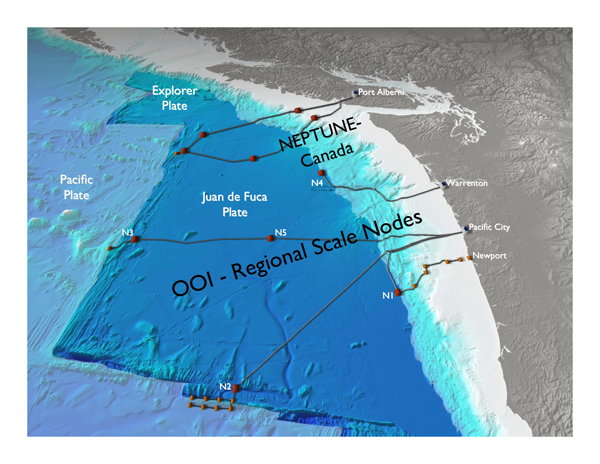 Sound is used for many purposes in these ocean observatories, including making measurements of ocean currents and other ocean properties, and performing various engineering tasks, such as conducting surveys of potential undersea cable routes.