Hearing in Pinnipeds, the Amphibious Ear 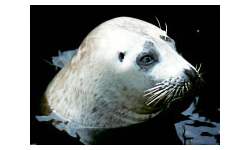 True seals, such as this harbor seal, have no external ears. Photo ©Tom Kieckhefer 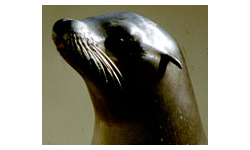 Pinnipeds (seals, sea lions, and walruses), sea otters, and polar bears spend time on land as well as in the water. Consequently, their ears have some adaptations in common with the ears of land mammals.

In pinnipeds the pinnae (external ear flaps) are reduced or absent. Otariids (eared seals) have small ear flaps. Phocids (true seals) have no pinnae. Muscles and a cartilage valve along the external ear canal function to close the ear canal to water. In general, the middle and inner ears of pinnipeds, polar bears, and otters are similar to those of humans and other terrestrial mammals. The mechanisms for hearing are essentially the same (See Hearing in Land Mammals). These animals that spend time both on land and in the water have a mix of adaptations. Depending on their life styles, some species hear best in air, whereas others hear better underwater.