Illustration of a seismic survey with two ships, one with the sound source and the other with an array of hydrophones. Image Credit: DOSITS.

At the bottom of the ocean, there are layers of sediments that contain information about the Earth’s history and below the sediment are layers of the ocean crust.  Seismic surveys (or sub-bottom profiling systems) are used to identify and characterize these layers of sediment and rock. The technique used is similar to a simple echosounder. A transducer emits a sound pulse vertically downwards towards the seafloor, and a receiver records the return of the sound pulse that is reflected off the seafloor. Parts of the sound pulse will penetrate the seafloor as a seismic wave and be reflected and refracted by the different sub-seafloor layers. Some of that seismic energy will return to the water as an acoustic signal and be recorded by the receiver.

Ocean Bottom Seismometers (OBS) are deployed on the seafloor to record earthquakes and low frequency sounds. The data from an OBS network can give information about the structure of the Earth. Ideally, when an OBS network is deployed, a seismic survey is conducted to characterize the seismic properties of the sub-bottom layers below the OBS network to improve the monitoring results.

Male fin whales produce long series of one-second vocalizations at low frequency, 15-30Hz (known as 20-Hz calls), that repeat every seven to forty seconds. These vocalizations can continue for up to 10 hours and are thought to be breeding displays. The vocalizations are some of the loudest natural sounds in the ocean, reaching intensities of 189 underwater dB, allowing them to be detected at distances of 30+ km. Fin whale vocalizations have been recorded in every ocean and have long been detected at OBS stations, which monitor seismic and acoustic frequencies below 50Hz for signals from earthquakes. 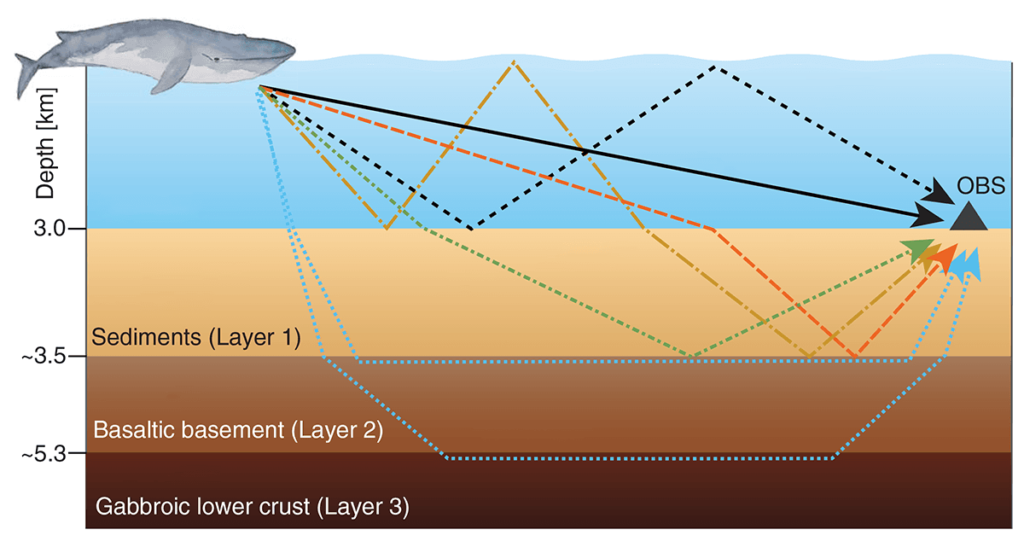 In 2021, researchers used fin whale calls to model the structure of the seafloor below a set of ocean bottom seismometers off the coast of Oregon. The resulting model of the seafloor layers match results of nearby ocean crustal surveys and match typical global ocean crust parameters. The results are not as robust as the results from a study using an air gun source. However, fin whale calls could be used to supplement passive seismic experiments during deployments of ocean-bottom seismic stations, particularly when the use of air guns is prohibited or impractical. While fin whales do not vocalize in all parts of the ocean, loud low frequency vocalizations by other whale species could also be used.