The global positioning system (GPS) is commonly used on land and in the air to obtain position and timing information. However, the radio frequencies used by GPS cannot penetrate in seawater, requiring a different system for underwater positioning. This information is useful to a variety of ships, automated vehicles, and even individuals. 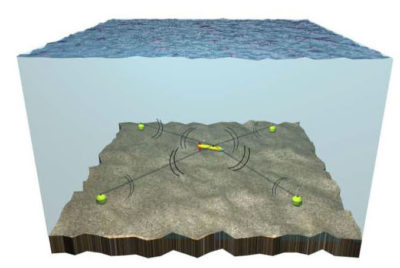 A long baseline system with an underwater vehicle transmitting and receiving from four baseline stations at the corners of the positioning system. Figure
used with permission (Alcocer, Oliveira, and Pascoal, 2006).

GPS Intelligent Buoys (GIBs) are a portable tracking system that includes a network of surface buoys equipped with GPS receivers and submerged hydrophones. Each hydrophone receives acoustic signals transmitted by a synchronized pinger onbard an underwater target. The buoys communicate the times of arrival of the received signals to a central station, such as a local support vessel, where the position of the underwater target is estimated.

(Left) Four GPS intelligent buoys receive signals from an underwater vehicle and transmit the information to a local support vessel. (Right) A GPS intelligent buoy. The hydrophone is deployed at the end of a cable below the white cage containing orange floats and an orange GPS receiver antenna. Figure used with permission (Alcocer, Oliveira, and Pascoal, 2006).