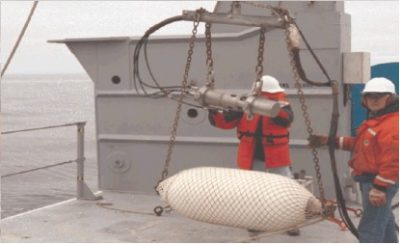 An engineer prepares to deploy a single airgun. The airgun will be suspended about 8 m below the water surface from the white float seen at the bottom of the image. Image courtesy of the National Science Foundation.

An airgun is a tool used to examine layers of the seafloor and study the Earth’s history. It can also be used to locate subsea oil and gas deposits.  Airguns rapidly release compressed air, causing a bubble to be formed. The formation of the bubble produces a loud sound that travels through the water to the ocean floor. Some of the sound energy is reflected off features of the seafloor. This reflected sound travels back to the sea surface where it can be recorded by hydrophone arrays called streamers. Some of the airgun sound can also travel into the seafloor and reflect off sediment or rock layers within the seabed. These deeper, reflected sounds also travel back up to the surface and may be detected by the hydrophones. The acoustic characteristics, particularly strength and timing of the reflected signals, can be analyzed by computer software to provide information on and imagery of geological features below the seafloor, including oil and gas deposits. (For more information about how airguns work, please visit the Technology Gallery)

This is the sound of air guns operating off Sable Island, Nova Scotia, but being recorded many thousands of kilometers away on the Mid-Atlantic Ridge. Note: This sound has been sped up by a factor of ten.Courtesy of NOAA Pacific Marine Environmental Laboratory VENTS Program

Multiple airguns are typically arranged in a rectangular pattern to form a tuned airgun array. The direct sound generated from each airgun combines to produce a much louder sound than that from just a single airgun. Airguns produce intense, broadband, impulsive sounds. The tuned airgun array produces an acoustic beam directed toward the seafloor. In addition, acoustic energy can also propagate laterally into the water column fortens to hundreds of kilometers from the source, though sound does get weaker as it moves away from the source.

Sounds produced by seismic airguns have the potential to cause injury, hearing loss, behavioral changes, and masking in fishes, marine mammals, and invertebrates.  However, data on the effects of airguns on marine life are limited. There are no studies of seismic airguns and their potential to cause death, mortal injury, or recoverable injury to wild fishes, and most behavioral studies have been conducted in a laboratory setting with freshwater species. Laboratory results do not necessarily reflect natural responses in the wild, and freshwater fishes, such as goldfish and zebrafish, are likely to respond very differently to a loud sound than a wild species such as Atlantic cod or tuna.

Research has been conducted with marine mammals and to study potential hearing loss due to seismic airgun sounds. Temporary threshold shifts (TTS) have been measured in captive harbor porpoise exposed to seismic airgun sounds. However, no hearing threshold shifts were measured in three bottlenose dolphins exposed to seismic airgun sounds. Research results suggest that harbor porpoises, classified as a high-frequency hearing specialist[1]National Marine Fisheries Service. (2018). 2018 Revisions to: Technical Guidance for Assessing the Effects of Anthropogenic Sound on Marine Mammal Hearing (Version 2.0): Underwater Thresholds for Onset of Permanent and Temporary Threshold Shifts. (No. NOAA Technical Memorandum NMFS-OPR-59) (p. 167)., are more sensitive than other mid-frequency hearing specialists. Observed behavioral reactions of cetaceans to seismic airguns include changes in vocalizations, dive patterns, and movements. Masking is a potential effect for fishes and marine mammals, though data, are very limited.