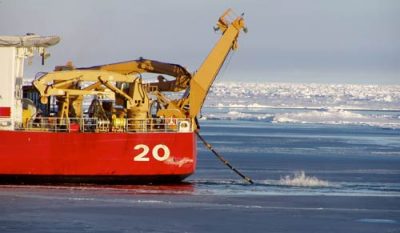 Seismic airguns are used primarily to examine the layers of the seafloor to study Earth’s history or locate subsea oil and gas deposits.  Airguns rapidly release compressed air, causing a bubble to be formed. The formation of the bubble produces a loud sound that travels through the water to the ocean floor. Some of the sound energy is reflected off features of the seafloor. This reflected sound travels back to the sea surface where it can be recorded by hydrophone arrays called streamers. Some of the airgun sound can also travel into the seafloor and reflect off sediment or rock layers within the seabed. These deeper, reflected sounds also travel back up to the surface and may be detected by the hydrophones. The acoustic characteristics, particularly strength and timing, of the reflected signals can be analyzed by computer software to provide information on and imagery of geological features below the seafloor, including oil and gas deposits. (For more information about how airguns work, please visit the Technology Gallery)

Multiple airguns are typically arranged in a rectangular pattern to form a tuned airgun array. The direct sound generated from each airgun combines to produce a much louder sound than that from just a single airgun. The tuned airgun array produces an acoustic beam directed toward the seafloor. In addition, acoustic energy across a wide range of frequencies also propagates laterally into the water column.

The sound of air guns operating off Sable Island, Nova Scotia, but being recorded many thousands of kilometers away on the Mid-Atlantic Ridge. Note: This sound has been sped up by a factor of ten. Courtesy of NOAA Pacific Marine Environmental Laboratory VENTS Program.

Seismic airguns have the potential to cause injury, hearing loss, behavioral changes, and masking in fishes, marine mammals, and possibly even many invertebrates. Two criteria for assessing the potential impacts of airgun sounds are: 1) peak pressure and 2) cumulative sound exposure level (SELcum). For more information, please see the Advanced Topic on Sound Pressure Levels and Sound Exposure Levels.

There are no studies of seismic airguns and their potential to cause death, mortal injury, or recoverable injury to wild fishes. However, the potential effect of seismic airguns on the hearing of three fish species was studied in a river setting. Fishes were placed in cages and exposed to five or twenty airgun shots of a 730 in3 airgun array, the type used for seismic surveys in rivers, while control fish were placed in the same cage without any exposure.  Hearing was tested using auditory brainstem response (ABR) before and after exposure to the sounds. Hearing loss was correlated with hearing sensitivity in that the species with the most sensitive hearing showed the most effect to the airgun exposure (greatest amount of temporary threshold shift (TTS)) while fish that do not normally hear well showed no hearing loss. In all cases, hearing fully returned within about 18 hours of exposure to the airgun sound[1]Song, J., Mann, D. A., Cott, P. A., Hanna, B. W., & Popper, A. N. (2008). The inner ears of Northern Canadian freshwater fishes following exposure to seismic air gun sounds. The Journal of the Acoustical Society of America, 124(2), 1360–1366. https://doi.org/10.1121/1.2946702.. Examination of the ears and other body tissues showed no physical effects due to this airgun exposure. 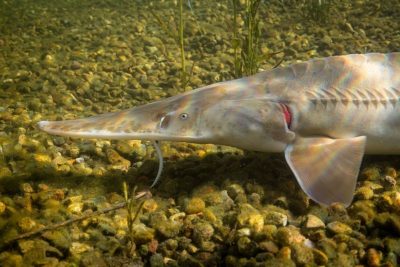 Pallid sturgeon are bottom dwelling, slow growing fish. When exposed to single shots of an airgun in a river in North Dakota, scientists found that even fishes closest to the airgun, where the peak sound pressure levels were the highest, there was no harm. Image credit: U.S. Fish and Wildlife Service.

In another study, pallid sturgeon and American paddlefish were exposed to single shots of an airgun in a river in North Dakota[2]Popper, A. N., Gross, J. A., Carlson, T. J., Skalski, J., Young, J. V., Hawkins, A. D., & Zeddies, D. (2016). Effects of exposure to the sound from seismic airguns on pallid sturgeon and paddlefish. PLOS ONE, 11(8), e0159486. https://doi.org/10.1371/journal.pone.0159486.. In this study, fish were put in cages at different distances from the airgun and they were examined to determine if there was any damage to any body tissues. The scientists found that even fishes closest to the airgun, where the peak sound pressure levels reached 231 dB (and 205 dB re 1 μPa2-s sound exposure level [SELss]), there was no harm to either species.

Behavioral responses by fishes to seismic airguns might range from exhibiting a momentary awareness of the sound to small movements or escape responses. Most fish experiments have been conducted in the laboratory where conditions can be controlled and fishes can be observed directly. However, results obtained in a laboratory do not reflect natural responses in the wild and most lab studies have been done with freshwater species, such as goldfish and zebrafish, which are likely to respond very differently to a loud sound than a wild species such as Atlantic cod, salmon, or tuna. Indeed, in the wild, fishes are known to behave differently depending on location, water temperature, physiological state, motivational state, age, body size, and school size. One study that did observe fish (Atlantic herring schools) in the wild found that swimming speed, swimming direction, and school size did not change during exposure to a full-scale three-dimensional (3D) seismic survey[3]Pena, H., Handegard, N. O., & Ona, E. (2013). Feeding herring schools do not react to seismic air gun surveys. ICES Journal of Marine Science, 70(6), 1174–1180. https://doi.org/10.1093/icesjms/fst079.. However, other studies of fish catches during seismic airgun exposure found that trawl and long-line catches decreased within the area of the seismic survey and at ranges of up to 18 nautical miles (33 kilometers)[4]Engås, A., Løkkeborg, S., Ona, E., & Soldal, A. V. (1996). Effects of seismic shooting on local abundance and catch rates of cod (Gadus morhua) and haddock (Melanogrammus aeglefinus). Canadian Journal of Fisheries and Aquatic Sciences, 53(10), 2238–2249. https://doi.org/10.1139/f96-177. although animals return to the site of the survey within hours or days after the survey ends[5]Løkkeborg, S., Ona, E., Vold, A., & Salthaug, A. (2012). Sounds from seismic air guns: gear- and species-specific effects on catch rates and fish distribution. Canadian Journal of Fisheries and Aquatic Sciences, 69(8), 1278–1291. https://doi.org/10.1139/f2012-059.

Though rarely used in acoustic impact assessments, particle motion is incredibly important, since all fishes detect particle motion, while some also detect pressure. However, there are few, if any, data on particle motion and how it relates to potential impacts, which is recognized as a critical research need[7]Popper, A. N., & Hawkins, A. D. (2018). The importance of particle motion to fishes and invertebrates. The Journal of the Acoustical Society of America, 143(1), 470–488. https://doi.org/10.1121/1.5021594..

Research has been conducted with marine mammals and seismic airguns to study potential hearing loss, behavioral changes, and masking. Temporary threshold shift (TTS) was measured in a captive harbor porpoise exposed to a single 20 in3 seismic airgun[8]Lucke, K., Siebert, U., Lepper, P. A., & Blanchet, M.-A. (2009). Temporary shift in masked hearing thresholds in a harbor porpoise ( Phocoena phocoena ) after exposure to seismic airgun stimuli. The Journal of the Acoustical Society of America, 125(6), 4060–4070. https://doi.org/10.1121/1.3117443.. The hearing sensitivity of the harbor porpoise was measured at frequencies between 4 and 160 kHz before exposure using auditory evoked potential (AEP) and at 4, 32, and 100 kHz after exposure. Threshold shifts of 7 to 20 dB were measured after exposures to the single airgun, with an estimated threshold for TTS onset of 140 dB SELcum. TTS was also observed in a harbor porpoise after exposure to 10 and 20 consecutive shots fired from two airguns simultaneously (SELcumof 188 and 191 dB re 1 µPa2s)[9]Kastelein, R. A., Helder-Hoek, L., Van de Voorde, S., von Benda-Beckmann, A. M., Lam, F.-P. A., Jansen, E., … Ainslie, M. A. (2017). Temporary hearing threshold shift in a harbor porpoise ( Phocoena phocoena ) after exposure to multiple airgun sounds. The Journal of the Acoustical Society of America, 142(4), 2430–2442. https://doi.org/10.1121/1.5007720.. However, no hearing threshold shifts were measured in three bottlenose dolphins exposed to ten impulses from a seismic airgun, with highest levels of 196 to 210 dB peak and cumulative sound exposure levels of 193 to 195 dB SELcum[10]Finneran, J. J., Schlundt, C. E., Branstetter, B. K., Trickey, J. S., Bowman, V., & Jenkins, K. (2015). Effects of multiple impulses from a seismic air gun on bottlenose dolphin hearing and behavior. The Journal of the Acoustical Society of America, 137(4), 1634–1646. https://doi.org/10.1121/1.4916591.. Research results suggest that harbor porpoises, classified as a high-frequency hearing specialist[11]National Marine Fisheries Service. (2018). 2018 Revisions to: Technical Guidance for Assessing the Effects of Anthropogenic Sound on Marine Mammal Hearing (Version 2.0): Underwater Thresholds for Onset of Permanent and Temporary Threshold Shifts. (NOAA Technical Memorandum NMFS-OPR-59) (p. 167)., are more sensitive than other mid-frequency hearing specialists. 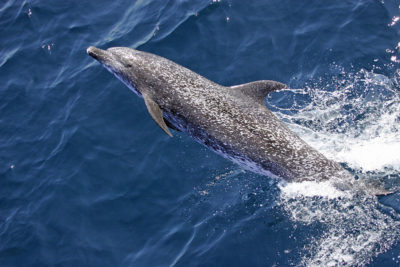 Atlantic spotted dolphins showed a significant, short-term avoidance response to airguns within approximately 1 km of the source. This is in contrast to the behavioral responses observed for sperm whales. Image credit: NOAA Fisheries.

Eight tagged sperm whales were exposed to seismic airgun surveys in the Gulf of Mexico[17]Madsen, P. T., Johnson, M., Miller, P. J. O., Aguilar Soto, N., Lynch, J., & Tyack, P. (2006). Quantitative measures of air-gun pulses recorded on sperm whales ( Physeter macrocephalus ) using acoustic tags during controlled exposure experiments. The Journal of the Acoustical Society of America, 120(4), 2366–2379. https://doi.org/10.1121/1.2229287.[18]Miller, P. J. O., Johnson, M. P., Madsen, P. T., Biassoni, N., Quero, M., & Tyack, P. L. (2009). Using at-sea experiments to study the effects of airguns on the foraging behavior of sperm whales in the Gulf of Mexico. Deep Sea Research Part I: Oceanographic Research Papers, 56(7), 1168–1181. https://doi.org/10.1016/j.dsr.2009.02.008.. Sound sources were from approximately 2 to 7 nautical miles away from the whales, and received levels were as high as 162 underwater dB. The whales showed no horizontal avoidance, however one whale rested at the water’s surface for an extended period of time until airguns ceased firing. Similarly, seismic airgun surveys along the Angolan coast did not significantly reduce the encounter rate of sperm whales during the 10-month survey period, nor were avoidance behaviors to airgun impulsive sounds observed[19]Weir, C. R. (2008). Overt responses of humpback whales (<i>Megaptera novaeangliae</i>), sperm whales (<i>Physeter macrocephalus</i>), and Atlantic spotted dolphins (<i>Stenella frontalis</i>) to seismic exploration off Angola. Aquatic Mammals, 34(1), 71–83. https://doi.org/10.1578/AM.34.1.2008.71.. In contrast, Atlantic spotted dolphins did show a significant, short-term avoidance response to airguns within approximately 1 km of the source. The dolphins were observed at greater distances from the vessel when the airgun was in use, and when the airgun was not in use they readily approached the vessel to bow ride.

Studies of the potential effect of seismic airguns on masking have been limited. A spotted and ringed seal in captivity were exposed to seismic airgun sounds recorded within 1 km and 30 km of an airgun survey conducted in shallow (< 40 m) water. They were then tested on their ability to detect a 500 ms upsweep centered at 100 Hz at different points in the airgun pulse (start, middle, and end). Based on these results, a 100 Hz vocalization with a source level of 130 underwater dB would not be detected above a seismic survey 1 km away unless the animal was within 1 to 5 m, and the signal of interest would not be detected above a survey 30 km away beyond 46 m[20]Sills, J. M., Southall, B. L., & Reichmuth, C. (2017). The influence of temporally varying noise from seismic air guns on the detection of underwater sounds by seals. The Journal of the Acoustical Society of America, 141(2), 996–1008. https://doi.org/10.1121/1.4976079..