Earthquakes and other geologic events produce acoustic signals that can be measured and monitored on land and underwater. Seismic energy from submarine earthquakes is converted into acoustic energy at the seafloor-water boundary.  A Tertiary wave (or T-wave) is an acoustic signal associated with earthquakes. T-waves propagate efficiently in the ocean compared to seismic waves through the earth and can be detected at great distances. When a submarine volcano erupts, T-waves are created due to earthquakes associated with the eruption. Underwater sound is also produced as the eruption occurs and lava, ash, and/or gas enter and interact with the water. 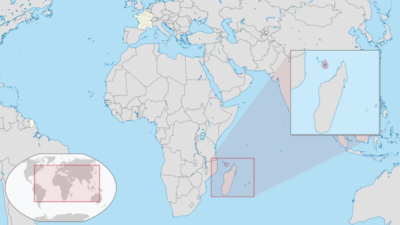 Map showing the location of Mayotte. The red bounding box off of Africa shows the island in between the continent and Madagascar. In the blown-up box to the right, Mayotte is the small island highlighted in red to the west of Madagascar. Imaged credit: TUBS, Licensed by Creative Commons Attribution-Share Alike 3.0.

In November 2018, an unusual seismic “hum” circled the globe. The signal maintained a very low frequency for a long period (more than 20 minutes) and was detected by seismometers around the world. Although the seismic signal was similar to that of an earthquake, scientists could not correlate an earthquake event to the signal. Moreover, earthquakes typically produce shorter seismic signals with multiple frequencies. As scientists investigated further, they found more than 400 humming signals, all originating from waters offshore of Mayotte, a small, French island between Mozambique, Africa, and the northern tip of Madagascar. Since May of 2018, thousands of earthquakes at varying intensities (most of which could not be felt on land) had taken place at this offshore location. In May 2019, a 5.9 magnitude earthquake was recorded at Mayotte, the strongest earthquake in the island’s history. Mayotte is an island in the Cosmoros Island Archipelago, which is volcanic in nature, however, long-term measurements indicated that a volcanic eruption had not occurred at Mayotte in approximately 4,000 years.

In February 2019, to better understand and locate the source of the seismic activity, several shore and sea research missions were launched. Multibeam bathymetric maps obtained during an oceanographic expedition revealed an amazing discovery and the source of the unusual seismic signals: a new, massive submarine volcano, estimated to be 800 m (about a half mile) in height with a base of 4-5 km in diameter (about 3.1 miles wide). This newly discovered underwater volcano is located 50 km to the east of Mayotte, in water depths of 3500 m.  It is estimated that more than 3 cubic km of magma has erupted onto the seafloor to create the volcano. The multibeam system also detected bubble plumes rising from the center and flanks of the volcano, reaching heights of 2 km (not high enough to reach the ocean surface).

The discovery of this submarine volcano was a major finding. Not only did the discovery of the volcano provide a better understanding of earthquakes occurring near Mayotte, scientists also used the volcano’s unusual seismic signals to create a timeline for its birth. This is the first time scientists have observed the birth of a volcano on the seafloor.

Seismic data showed two stages in the volcano’s creation. First, magma from a deep chamber inside the earth fed molten rock, diagonally, toward the seafloor. It is one of the deepest magma chambers ever discovered, approximately 26 to 29 km (16 to 19 mi) below the seafloor. The diagonal movement of the magma triggered the initial earthquakes near Mayotte. These earthquakes actually provided acoustic markers from which scientists could reconstruct the upward flow of the magma. Once the magma channel was open, the molten rock erupted out of the chamber onto the seafloor, and the volcano was created. It only took a few weeks for the magma to move from the upper mantle to the seafloor. As the magma chamber drained, the area above it weakened, sagged, and fractured. This sagging of the chamber is thought to have produced the unusual seismic “hums”. Each time rock sagged into the hollowed magma chamber, it produced resonance, and this created the strange signal detected on seismometers up to 11,000 miles away.

It is difficult to measure geological activities deep within the Earth’s crust. In this study, scientists decoded a new type of acoustic signal from the Earth’s interior that indicates a dramatic movement of molten rock before an eruption. This provides scientists with a framework from which they can interpret future seismic events. Many suspect the young volcano off Mayotte has finished growing, however, there are still earthquake and tsunami risks for the island of Mayotte and the more than 250,000 people that live there. Data continue to be collected to monitor and better assess seismic, volcanic, and tsunami risks in the area.