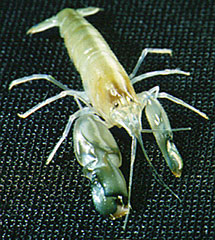 Courtesy of the Department of Applied Physics, University of Twente

Snapping shrimp are crustaceans that are widely distributed throughout tropical and temperate seas. These shrimp, usually a muddy green color, grow to about 5 cm (2 inches) long. Their most noticeable physical feature is a claw that is significantly larger than the other. It is this claw that gives snapping shrimp their most remarkable attribute. A snapping shrimp will quickly close its claw to produce a loud “snap” as a way to stun its prey, deter predators, and communicate with others. Sound is produced by the popping of a bubble that is produced when the larger claw opens and closes rapidly. Muscle contraction of the enlarged claw causes it to close at such a high speed that the water cavitates, forming a vapor bubble. Sound is produced when the bubble collapses. Scientists have also found that light is produced when the bubble pops due to the high temperatures and pressure inside the bubble. Alpheus heterochaelis is the only known species to produce sound using this cavitation process. The combined sound of large aggregations of snapping shrimp is so prevalent in certain areas of the world that it interferes with interferes with underwater communications and research. 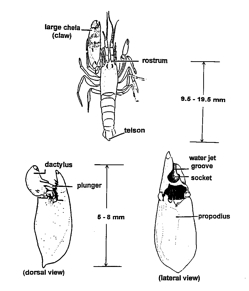 Drawing of a snapping shrimp showing the top view of the whole shrimp and the dorsal and lateral views of the large claw. In the lateral view, part of the claw is removed to show the water jet groove that plays a critical role in sound production. (Adapted from Figure 1 from Knowlton and Moulton. 1963. Biol. Bull. 125:311-331. Reprinted with permission from the Marine Biological Laboratory, Woods Hole, MA.