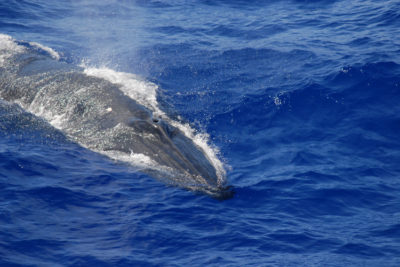 Unlike other rorquals, which have a single ridge on their rostrum, Bryde’s whales have three prominent ridges in front of their blowhole (some refer to this distinct feature as a “splashguard”). Image credit: NOAA Fisheries.

Bryde’s (pronounced “broodus”) whales, Balaenoptera edeni are found in tropical, subtropical, and warm temperate waters around the world. They are rorquals, belonging to the same group as blue whales and humpback whales and look similar to fin and sei whales. They have been reported to reach lengths up to 16.8 m (55 ft). Bryde’s whales feed on krill, copepods, crabs, shrimp, and a variety of schooling fishes. The Gulf of Mexico subspecies of Bryde’s whale is listed as “endangered.”

Like other baleen whales, Bryde’s whales produce low frequency (20-950 Hz) sounds described as pulses, moans, pulsed moans, sweeps, and tonal calls. These sounds vary in frequency, duration, modulation, and whether harmonics are present. Most of the sounds have fundamental frequencies below 60 Hz, are 1-3 seconds in duration, and are produced in extended sequences.

Bryde’s whale call repertoire vary geographically. In the Eastern Tropical Pacific (ETP), the most abundant call type recorded was a complex, two-part, frequency-modulated “Be1” call, which lasted for an average of 2 seconds. Scientists believe Bryde’s whales may use this sound to “countercall” when two animals are in close proximity, with one whale producing the upper frequencies associated with the sound and the second answering at the lower frequencies. In New Zealand, the most common call began with an impulsive broadband sound followed by a downward sweep from 25-22 Hz. In the Gulf of Mexico, downswept pulse pairs were recorded (the “Be9” call) that are produced in sequences lasting approximately 9 seconds. One call type, the “Be4” call, has been recorded across different geographic groups. This call is a 60 Hz, non-harmonic call that lasts about 1.4 seconds.

Visual identification of Bryde’s whales is challenging, given the species’ morphological similarities to fin and sei whales. Further, the whales often avoid ships, swim erratically, and exhibit low activity levels at the surface, making them difficult to detect. Passive acoustic monitoring of species-specific vocalizations is useful in determining Bryde’s whale temporal and spatial distribution patterns. For example, in the Southern California Bight, the Be4 call was detected between summer and early winter, suggesting a seasonal poleward expansion of this typically warm-water species.