How is sound used to study marine mammal distribution?

Humpback whale songs can be typically heard in their winter breeding grounds (e.g., Hawaii), but this recording of a humpback whale singing was actually taken in one of their feeding grounds on Cordell Bank Canyon, off the coast of San Francisco, CA. The echoes you hear are from their sounds bouncing off the canyon walls.
Sound ©Thomas R. Kieckhefer. Released under Creative Commons License, non-commercial attribution.

20 Hz pulses, produced by fin whales, recorded by SOSUS receivers in the eastern North Atlantic. To make this sound audible for people, it was sped up by a factor of ten. This raises the pitch and compresses the time.
Sound © Cornell Laboratory of Ornithology, Bioacoustics Research Program.

Scientists can listen for these sounds and detect different marine mammal species. Researchers use hydrophone arrays to detect the position of a whale producing a sound. A hydrophone array consists of three or more hydrophones deployed at different locations. Differences in the time of arrival of sounds at each hydrophone are used to calculate the position of the whale. Hydrophone arrays can be towed behind a ship or placed on the seafloor. Passive acoustic tracking methods (towed arrays and fixed horizontal arrays) have been successfully applied to follow individual whales for many days, acoustically observe pods of whales, and describe species- specific seasonal changes in distribution and relative abundance.

A hydrophone array can be towed behind a ship or placed on the seafloor. It contains at least three hydrophones that pick up sounds in the ocean. Sounds, such as whale calls, are received at different times because the hydrophones are different distances away from the sound source (i.e. whale).

One system used by the U.S. Navy to track submarines in the North Atlantic and North Pacific oceans is called the Sound Surveillance System (SOSUS). SOSUS is a network of hydrophones mounted on the seafloor. Since the end of the Cold War, the Navy has allowed researchers to use SOSUS data to analyze animal sounds in the ocean and to determine marine mammal distribution throughout the year. SOSUS was used to track an individual blue whale for 43 days throughout the North Atlantic Ocean. 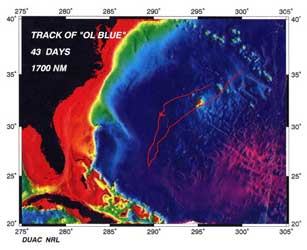 A blue whale was tracked for 43 days in the north Atlantic Ocean using the US Navy’s underwater listening system. Map courtesy of US Naval Research Laboratory.

How is sound used to study right whale distributions? A Case Study

New England waters offer primary feeding grounds for the North Atlantic right whale. Adult right whales traditionally winter in calving grounds off of Georgia and Florida and return to the plankton-rich waters of coastal Massachusetts and Maine in the summer months. Researchers and managers are using sound to monitor the distribution of this critically endangered species (minimum population estimate: 444 animals; NMFS, 2012). 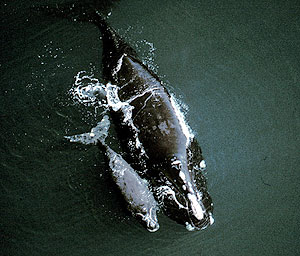 Right whales produce a variety of low frequency sounds. The most common are between 10 Hz and 1000 Hz. One typical right whale vocalization used to communicate with other right whales is the “up call”. It is a short “whoop” sound that rises from about 50 Hz to 440 Hz and lasts about 2 seconds. Detection of up calls has been the most common means of determining right whale presence from acoustic data.

Right whale “up call’ or contact call that is most commonly heard when whales are alone or joining with another whale.
North Atlantic right whale sounds recorded by Susan Parks (Syracuse University) and the Woods Hole Oceanographic Institution. Released under Creative Commons License, non-commercial – no derivs.

Passive listening systems called Marine Autonomous Recording Units (MARUs), or “pop-up” buoys, have been deployed along the Atlantic coast to continuously monitor for the presence of cetacean species such as the right whale. The MARUs are deployed for an extended period and record acoustic data to be downloaded upon instrument retrieval. MARUs can be used under weather and light conditions that restrict visual surveys. When weather conditions are good, aerial surveys can be used to complement the acoustic detections. For more information on this passive acoustic technology, and other passive acoustic systems used to monitor marine animals, please see the Observing and Monitoring Marine Animals section in the Technology Gallery: Acoustic Doppler Current Profiler (ADCP).

Archival pop-up buoys have been deployed in the Stellwagen Bank National Marine Sanctuary (SBNMS), off Massachusetts. Scientists use the devices to characterize the marine acoustic environment in the sanctuary, investigate the effects of noise on marine animals, and detect and track vocalizing marine mammals, like the North Atlantic right whale. As a result of increased acoustic monitoring, we now know that right whales occupy the Stellwagen Bank region throughout most of the year. Overall distribution and occurrence of up-calls varies spatially, suggesting the whales use all of Stellwagen Bank while in the area. 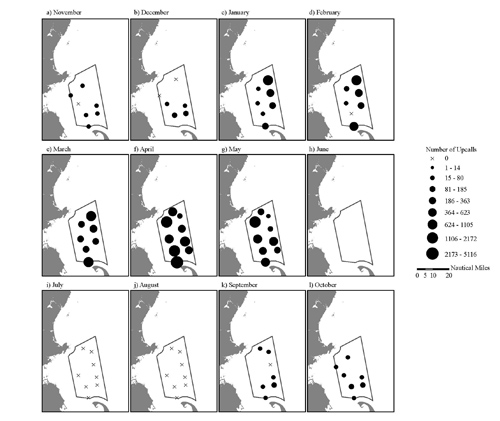 Number of North Atlantic right whale upcalls recorded monthly in 2006 on Marine Autonomous Recording Units (MARUs) distributed throughout Stellwagen Bank National Marine Sanctuary. Between six and nine MARUs were recording each month, with the exception of June, in which no MARUs were deployed. The size of the circle indicates the number of upcalls recorded on a specific buoy, and an “x” indicates that no calls were detected. Figure credit: NMFS/NEFSC, SBNMS, Cornell University.

Pop-up acoustic buoys have also been deployed to monitor right whales in areas off the coast of Maine, New York, North Carolina, Georgia and Florida, as well as in the Bay of Fundy, Canada. Scientists are also gathering acoustic data on the seasonal occurrence and distribution of endangered right whales in coastal waters to reduce the risk of ship strike. For more information on how acoustic buoys are being used to reduce the risk of vessel collision and the North Atlantic right whale, please see How is Sound Used to Protect Marine Mammals?