How does sound propagate through sediment?

The medium through which a sound travels affects the behavior of the sound. Sound behaves differently in air than in water, and likewise sound behaves differently in ocean bottom sediments. Sound can move into sediments from the ocean or originate within them. Common sources of sound that can propagate through the sediments are from natural sources, such as earthquakes, volcanic eruptions, and marine mammal calls, as well as anthropogenic sources, such as pile-driving, seismic surveys, dredging, and explosives.

Most ocean sediment is made of particles with sizes ranging from 1µm to 2mm. Marine sediment is usually a mix of particle compositions including terrigenous material, clay, and shells or shell parts made of calcium carbonate or silica. The sediment grain size and composition along with its porosity are important factors in sediment wave propagation, such as wave speed and attenuation. 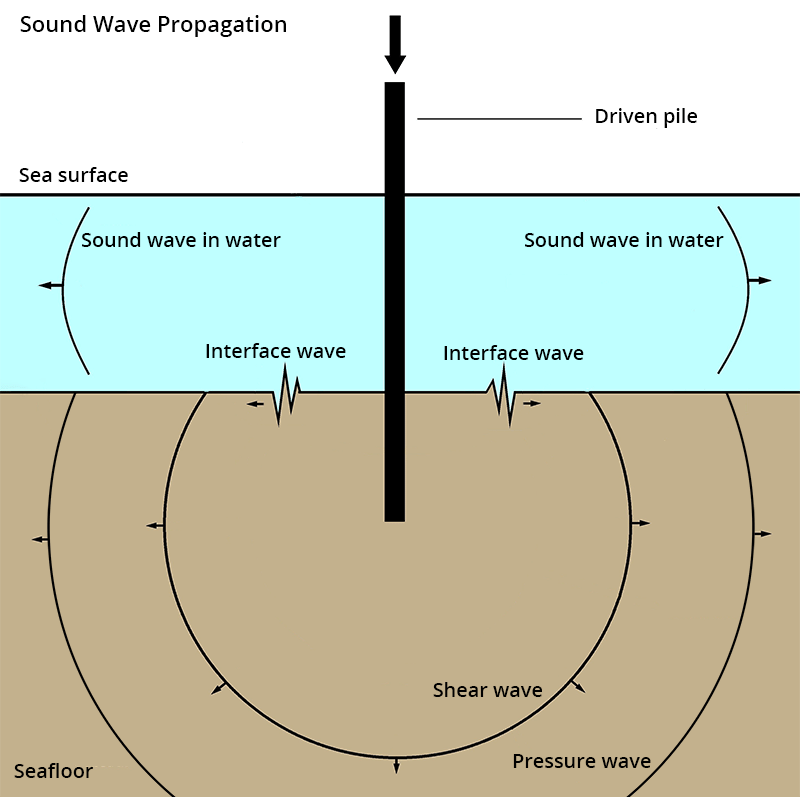 Diagram of sound waves generated by pile driving. Sound travelling down the pile creates waves in the water (sound waves), in the sediment (pressure and shear waves) and at the sediment-water interface (interface waves). Waves can transition from sediment to water and vice versa. Image modified from Dr. Anthony D. Hawkins.

The speed of pressure waves in the top few meters of sediment are generally similar to, or faster than, sound speed in water with typical sediment sound speeds from 1,450 m/s to 1,700 m/s (sound travels about 1,500 m/s in water and 340 m/s in air). However, shear wave speeds will be less than pressure wave speeds and are typically 50 to 200 m/s in the top few meters of sediment. Compressional and shear wave speeds in sediments generally increase with larger grain size and with depth in the sediments. Attenuation for pressure waves and shear waves increases with frequency.

The presence of infauna and burrows in the surface sediments have been found to alter wave propagation and attenuation. For example, compressional wave speed can vary by ±5% in sediment with high concentrations of infauna such as burrowing worms. Infauna can also produce vibrations themselves. 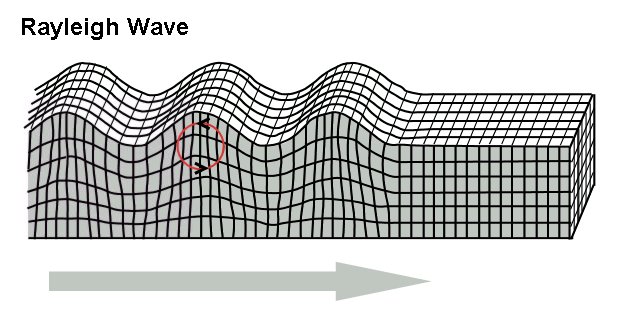 Interface waves have both a longitudinal motion and a transverse motion which results in a particle near the interface moving in a clockwise direction, this includes in both the sediment and the water near the seafloor. The amplitude of these interface waves decreases exponentially with distance from the water/sediment interface. There is little or no particle motion at a distance beyond a few wavelengths. Interface waves travel at about 90% the speed of shear waves.

Rayleigh Wave animation. The particle motion decreases in amplitude away from the interface. Other interface waves behave in a similar manner. Image Credit University of Rhode Island – DOSITS.