In water, sound typically propagates farther than light. Thus, it is not surprising that acoustic communication, defined as transmission of information from a signaling animal to a receiving animal, plays a key role in the behavior and social interactions of marine animals, especially marine mammals. Marine mammals, like cetaceans that live in cohesive social groups, need to communicate in order to coordinate their activities and maintain social ties. 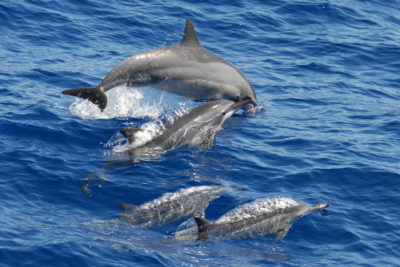 Communication signals of some dolphin species have been well-studied. Dolphins, such as these spinner dolphins, produce whistles as a form of communication. Scientists have been cataloging and categorizing whistles from various study populations for some time. Image credit: NOAA Fisheries.

Cetaceans produce a variety of tonal and pulsed calls for underwater communication. To understand the function of these sounds, scientists must identify which animal is producing a given sound, the responses of animals that hear it, and the context under which the signal is produced. The specific structure of the signal and propagation characteristics are also important.

Scientists, through both field observations and experiments with captive animals, have found that the types of social bonds between individuals in a group correlate with specific types of communication signals:

Cetaceans produce a variety of underwater sounds for communication including the tonal and pulsed calls mentioned above. Several of these specialized sounds are described below. In some cases, including signature whistles and contact calls, considerable evidence exists for a specific communication role for these sounds. There are many other categories of cetacean sounds, such as burst pulsed calls, click communication, and deep-water tonal sounds, for which there is some evidence of a communicative role, but a specific function has not been determined.

Toothed cetaceans produce vocalizations over a broad range of frequencies. They also exhibit acoustic plasticity, adapting signal structure in response to natural or anthropogenic factors, the state of an animal, and social context.

One of the most well-studied odontocete vocalizations is the whistle, a frequency modulated, narrow-band signal. Whistles last from several tenths of a second to several seconds and typically range in fundamental frequency between 2 and 25 kHz. Some dolphin species, such as the Guiana dolphin, can produce very high frequency whistles (> 40 kHz) that may be intended for communication across short distances[4]Barbosa, M., Bittencourt, L., G. Andrade, L., L. Bisi, T., Lailson-Brito, J., & F. Azevedo, A. (2019). High-frequency social communication in Sotalia guianensis. The Journal of the Acoustical Society of America, 146(2), EL124–EL128. https://doi.org/10.1121/1.5120550.. Each species produces distinctive whistle features, which help scientists identify species[5]Oswald, J. N., Rankin, S., Barlow, J., & Lammers, M. O. (2007). A tool for real-time acoustic species identification of delphinid whistles. The Journal of the Acoustical Society of America, 122(1), 587–595. https://doi.org/10.1121/1.2743157..

During the first year of life, a dolphin develops its signature whistle based on other whistles in its environment (“vocal learning”). Once developed, the dolphin’s signature whistle usually does not change significantly. This whistle stability is thought to foster long-term social bonds within dolphin groups. During field-based playback experiments, scientists found bottlenose dolphins to not only discriminate between different whistles of familiar individuals, but also show a significant likelihood of head-turning in response to the playback of whistles from a mother or independent offspring[6]Sayigh, L. S., Tyack, P. L., Wells, R. S., Solow, A. R., Scott, M. D., & Irvine, A. B. (1999). Individual recognition in wild bottlenose dolphins: A field test using playback experiments. Animal Behaviour, 57(1), 41–50. https://doi.org/10.1006/anbe.1998.0961..

Frequency cues (differences in the frequency contours of a signal between individuals) are critical elements of individual signature whistles; some dolphins can detect as little as a 0.2% change in a signal’s frequency[7]Tyack, P. L., & Clark, C. W. (2000). Communication and Acoustic Behavior of Dolphins and Whales. In W. W. L. Au, R. R. Fay, & A. N. Popper (Eds.), Hearing by Whales and Dolphins (Vol. 12, pp. 156–224). Springer New York. https://doi.org/10.1007/978-1-4612-1150-1_4.. Dolphins can also mimic the signature whistles of other individuals of their species. This vocal matching appears to occur between animals that share strong social bonds. Signature whistles are a good illustration of  “vocal matching.” This is a behavior where a listening animal responds to a signal of a near-by animal by changing some of the features of its own response in order to imitate the signal from the other animal. The timing of this response is a crucial factor in vocal matching and may indicate the motivation of the respondent. For example, if there is a long pause after the initial signal, the subsequent response may not be recognized as a reply to that signal. Playback experiments with bottlenose dolphins showed an optimal time interval for vocal matching of signature whistles to be less than 1 second[8]King, S. L., Harley, H. E., & Janik, V. M. (2014). The role of signature whistle matching in bottlenose dolphins, Tursiops truncatus. Animal Behaviour, 96, 79–86. https://doi.org/10.1016/j.anbehav.2014.07.019..

Below are three examples of more complex signature whistles from other dolphins (Courtesy of Jennifer Miksis-Olds). 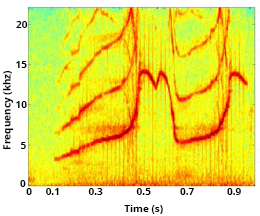 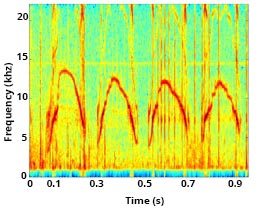 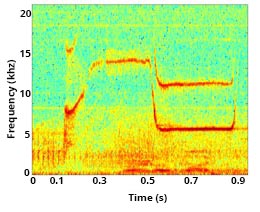 Most cetaceans have evolved specific communication signals, including contact calls, to maintain connection and/or reunite with one another. A most basic and common bond in mammals is between a mother and her young. As a calf matures, the proportion of active behaviors (travel, foraging, and social activity) increases, resulting in physical separation between mother and calf. Contact calls are an important form of communication to signal the desired return of the calf to the mother.

Signature whistles (discussed above) can serve as a type of contact call and play an important role in facilitating mother-calf coordination. Mother bottlenose dolphins are more likely to use acoustic signals to recall their calf, rather than pursue their young and physically herd them to a location. In addition to their signature whistle, mother dolphins may also produce other secondary whistles, and occasionally clicks, to recall their calf. The mother’s call communicates information about her location and/or motivational state, and/or emphasizes the need for the calf to return[9]Kuczaj, S., Eskelinen, H., Jones, B., & Borger-Turner, J. (2015). Gotta Go, Mom’s Calling: Dolphin (Tursiops truncatus) Mothers Use Individually Distinctive Acoustic Signals To Call Their Calves. Animal Behavior and Cognition, 2(1), 88–95. https://doi.org/10.12966/abc.02.07.2015. [10]King, S. L., Guarino, E., Keaton, L., Erb, L., & Jaakkola, K. (2016). Maternal signature whistle use aids mother-calf reunions in a bottlenose dolphin, Tursiops truncatus. Behavioural Processes, 126, 64–70. https://doi.org/10.1016/j.beproc.2016.03.005..

Baleen whales also produce signals that may function as contact calls. For example, right whales produce the “upcall” which is a short, tonal, sweep that ascends in frequency. These vocalizations are produced by males and females of all age classes and are thought to be a primary contact call, including mothers with calves. Mother-calf pairs call at low rates on the calving grounds; however, call activity increases as pairs move to foraging areas and as calves increase in age and activity level. The highest calling rates occur during surface active play[16]Cusano, D. A., Conger, L. A., Van Parijs, S. M., & Parks, S. E. (2019). Implementing conservation measures for the North Atlantic right whale: Considering the behavioral ontogeny of mother‐calf pairs. Animal Conservation, 22(3), 228–237. https://doi.org/10.1111/acv.12457.. In general, rates of upcalls can be affected by behavioral state, with lower rates of upcalls produced during periods of foraging, traveling, or resting, and higher rates during surface activities.

Although much marine mammal acoustic research has focused on whistles and other frequency-modulated signals, burst pulsed sounds are another common communication signal used by many species of toothed whales. These broadband, high frequency sounds with short inter-pulse intervals can be difficult to describe because their characteristics are highly variable. Burst pulsed sounds are often described as squawks, creaks, bleats, barks, and pops. They may be produced singly, in bouts, or in association with whistles. They also often occur in agonistic interactions and/or may signal a change in behavior. For example, “long burst pulsed sounds” (duration longer than 200 ms) produced by Sardinian bottlenose dolphins during depredation events may be used as avoidance vocalizations to prevent competition between group members[17]Díaz López, B., & Shirai, J. A. B. (2009). Mediterranean common bottlenose dolphin’s repertoire and communication use. In A. G. Pearce & L. M. Correa (Eds.), Dolphins: Anatomy, Behavior, and Threats. (pp. 129–148). Nova Science Publishers, Inc.. Researchers have found that burst-pulsed sounds produced by white-beaked dolphins took place before a pod switched from slow swimming with frequent directional changes to rapid, straight-line swimming[18]Simard, P., Mann, D. A., & Gowans, S. (2008). Burst-Pulse Sounds Recorded from White-Beaked Dolphins (Lagenorhynchus albirostris). Aquatic Mammals, 34(4), 464–470. https://doi.org/10.1578/AM.34.4.2008.464..

Recording of burst-pulsed sounds made by Hawaiian spinner dolphins (Stenella longirostris) from an environmental acoustic recording deployment off of Kahe Point, Oʻahu (21.35467, -158.1368) at a depth of 15.24 m on April 8, 2019 at 07:20 am. Sound recording by Megan M. McElligott and Marc O. Lammers with the University of Hawaiʻi at Mānoa and the Oceanwide Science Institute. 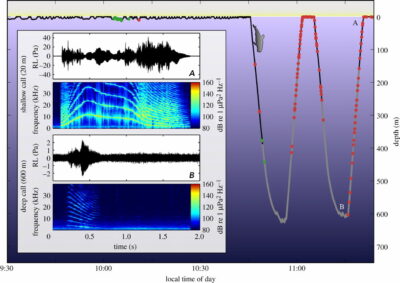 Dive profile of a short-finned pilot whale tagged with a multisensory acoustic tag comprising a period at the surface followed by two deep foraging dives. Two tonal calls from the last ascent (see letters in dive profile, A is a shallow call, B a deepwater call at the bottom of the dive around 600m) are shown as inset waveforms and spectrograms. Note the lower amplitude and shorter duration of the deep call (B). In the dive profile graphic, grey lines represent regular echolocation clicking; red dots, tonal calls; and green dots, pulsed calls. Adapted with permission from Jensen et al. 2011. Calling under pressure: short-finned pilot whales make social calls during deep foraging dives. Proceedings of the Royal Society B. 278: 3017–3025.