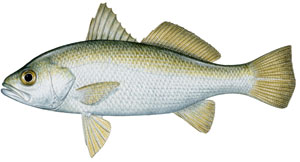 This species occurs in coastal waters from New York to the Gulf of Mexico and is commonly found over sandy or muddy bottoms. Spawning takes place during the spring and summer months in higher salinity areas of inshore environments including estuaries, bays, and lagoons. Early juveniles occupy vegetated areas of these environments where abundant foraging opportunities and sheltered areas are available. Adults may overwinter in deeper offshore waters during winter months. The silver perch reaches maturity during its second or third year and lives up to six years.The male silver perch produces a relatively high frequency “knocking” sound used to attract females during courtship and spawning. Like other members in its family (Sciaenidae), sounds are produced by vibrating the sonic muscle against the membrane of the swim bladder. During the spawning season nocturnal choruses of silver perch can be heard beginning near dusk and lasting several hours into the night.