How do marine invertebrates produce sounds?

One method of marine invertebrate sound production, commonly found in crustaceans, involves stridulation, which is the rubbing of two body parts together. Different species of marine crustaceans use different anatomical structures to stridulate, including claws, legs, antennae, and the carapace. For example, some marine hermit crabs, Trizopagurus spp.,[1]Field, L. H., Evans, A., & Macmillan, D. L. (1987). Sound production and stridulatory structures in hermit crabs of the genus Trizopagurus. Journal of the Marine Biological Association of the United Kingdom, 67(1), 89–110. https://doi.org/10.1017/S0025315400026382. have parallel rows of hard ridges called tubercles and spines along the chelipeds. Stridulation (frequency 6 to 8 kHz) occurs when the crabs withdraw into their shell during shell defense, when the claws (chelae) scrape against each other. Low frequencies (< 300 Hz) are transmitted also via the shell as substrate-borne vibration.

While most crustaceans that stridulate do so by rubbing external ridges on their legs, claws, and body, semi-terrestrial ghost crabs, Ocypode spp., have additional, internal stridulatory structures. These crabs can stridulate by rubbing internal teeth in their guts, producing sounds with dominant frequencies between 2-3 kHz[8]Taylor, J. R. A., deVries, M. S., & Elias, D. O. (2019). Growling from the gut: Co-option of the gastric mill for acoustic communication in ghost crabs. Proceedings of the Royal Society B: Biological Sciences, 286(1910), 20191161. https://doi.org/10.1098/rspb.2019.1161.. Researchers hypothesize that a secondary internal stridulatory structure allows ghost crabs to produce sounds during aggressive interactions while also using claws for visual displays or aggressive attacks.

Spiny lobsters are unique in that they use flexible structures to stridulate. They produce a rasping sound using their antennae in a “stick and slip” movement. This is similar to that of a bow moving over the strings of a violin[9]Patek, S. N. (2001). Spiny lobsters stick and slip to make sound. Nature, 411(6834), 153–154. https://doi.org/10.1038/35075656.. The bow “sticks and slips” over the strings due to friction, generating acoustic vibrations. When the lobster’s antennae move, a piece of tissue at the base of each antenna, the plectrum, rubs against a smooth, stiff file located near the eye. Because the “stick and slip” method does not require hard parts, spiny lobsters can still make sound when their exoskeleton softens during the molting process. This reduces their vulnerability to predators because they can still produce sound as a defense mechanism. 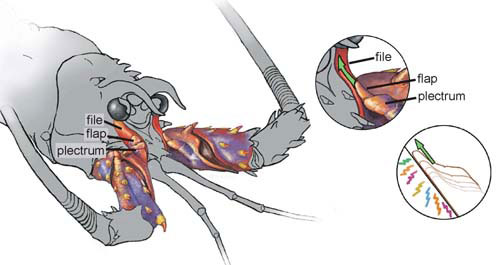 This diagram illustrates how spiny lobsters produce sound. They make a “rasp” sound by rubbing a plectrum (an extension off of the base of each antenna) over a file which is located on each side of a plate below the eyes. The plectrum is made of soft tissue and the file is smooth, which means that spiny lobsters make sound differently than other arthropods. Most arthropods rub a hard pick over a series of bumps to make sound (like a washboard). Instead, spiny lobsters use “stick-slip” friction between the soft plectrum and sticky-smooth file to make sound pulses (like a bow moving over the strings of a violin). Artwork © Sally J. Bensusen/Visual Science Studio (http://www.visualsciencestudio.com). 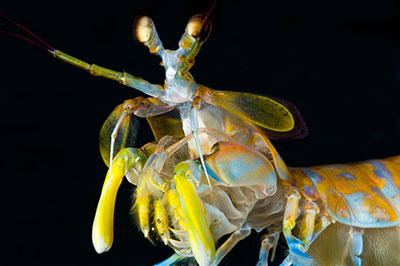 The California mantis shrimp, Hemisquilla californiensis, produces sounds by vibrating its carapace. The low frequency rumbles of the mantis shrimp are approximately 167 Hz and last approximately 0.2 s. Acoustic activity is high during dawn and dusk, a time when the animals are feeding or guarding their burrows. Image credit: Roy Caldwell, University of California, Berkeley.

Contractions of muscles at the base of the American lobster’s antennae create vibrations of the animal’s carapace. These vibrations are low frequency “buzzes” at approximately 180 Hz. Mantis shrimp also produce sound by vibrating their carapace. Low frequency “rumbles” by the California mantis shrimp have a dominant frequency of 167 Hz, on average, and last about 0.2 s[10]Staaterman, E., Clark, C., Gallagher, A., deVries, M., Claverie, T., & Patek, S. (2011). Rumbling in the benthos: Acoustic ecology of the California mantis shrimp Hemisquilla californiensis. Aquatic Biology, 13(2), 97–105. https://doi.org/10.3354/ab00361.. Scientists have recorded multiple individuals in an area producing rumble sounds simultaneously.

Snapping shrimp are widely distributed throughout tropical and temperate seas. They use cavitation to create sound. One of their claws is significantly larger than the other. Sound is produced by the popping of a bubble that is produced when the larger claw opens and closes rapidly[11]Versluis, M. (2000). How snapping shrimp snap: Through cavitating bubbles. Science, 289(5487), 2114–2117. https://doi.org/10.1126/science.289.5487.2114.. Muscle contraction of the enlarged claw causes it to close at such a high speed that the water cavitates, forming a vapor bubble. Sound is produced when the bubble collapses. Snapping shrimp produce one of the most intense biotic underwater sound pressure levels recorded[12]Jakobsen, L., Christensen-Dalsgaard, J., Juhl, P. M., & Elemans, C. P. H. (2021). How loud can you go? Physical and physiological constraints to producing high sound pressures in animal vocalizations. Frontiers in Ecology and Evolution, 9, 657254. https://doi.org/10.3389/fevo.2021.657254..

Freeze-framed images from a high-speed video recording showing the bubble produced by the snapping shrimp. Photo series courtesy of Department of Applied Physics, University of Twente.

Soft-bodied invertebrates can also produce intense sounds. While the mechanisms of sound production have not been determined, scientists believe some marine worms produce cavitation similar to the snapping shrimp. The marine worm, Leocratides kimuraorum, produces intense, impulsive sounds during fights. They rapidly expand their pharynx during mouth-fighting, producing a loud pop or a snap that is similar to snapping shrimp sounds in its brevity, intensity, and frequency composition[13]Goto, R., Hirabayashi, I., & Palmer, A. R. (2019). Remarkably loud snaps during mouth-fighting by a sponge-dwelling worm. Current Biology, 29(13), R617–R618. https://doi.org/10.1016/j.cub.2019.05.047..

Semi-terrestrial crabs can produce sounds by rapping a body part against the substrate. Male ghost crabs, for example, produce rapping sounds by hitting the ground with one of their claws. The crabs produce more rapid and longer sequences by drumming with both claws[14]Clayton, D. (2008). Singing and dancing in the ghost crab Ocypode platytarsus (Crustacea, Decapoda, Ocypodidae). Journal of Natural History, 42(3–4), 141–155. https://doi.org/10.1080/00222930701840530.. Rapid stepping during dance displays also produces low-level sounds. Male fiddler crabs also use their claws to produce sound by striking parts of their body or the substrate[15]Burkenroad, M. D. (1947). Production of sound by the fiddler crab, Uca Pugilator Bosc, with remarks on its nocturnal and mating behavior. Ecology, 28(4), 458–462. https://doi.org/10.2307/1931234. Some species can be identified by the frequency and time interval of their sounds. For example, the sand fiddler crab produces rapping sounds between 600 and 2400 Hz and the mudflat fiddler crab produces sounds between 300 and 600 Hz[16]Salmon, M. (1971). Signal characteristics and acoustic detection by the fiddler crabs, Uca rapax and Uca pugilator. Physiological Zoology, 44(4), 210–224..

Ocypodej ousseaumei, a species of ghost crab that produces sound by stridulation and/or rapping its claws against the substrate. Image courtesy of David Clayton, Sultan Qaboos University (Oman).

Other mechanisms of invertebrate sound production

Long-spined sea urchins[17]Radford, C., Jeffs, A., Tindle, C., & Montgomery, J. (2008). Resonating sea urchin skeletons create coastal choruses. Marine Ecology Progress Series, 362, 37–43. https://doi.org/10.3354/meps07444. produce crackling sounds during movement of their spines against a hard structure. Sounds may also be produced by the test and a special feeding structure, Aristotle’s lantern. The five teeth present in the lantern protrude from the ventral side of a sea urchin and are used to scrape algae or invertebrates from the substrate.

Most sea urchins possess – in addition to a calcified test and numerous spines – a complex feeding apparatus, the Aristotle’s lantern. This structure is composed of multiple calcified elements and numerous soft parts such as muscles and connective tissue. Each lantern contains five teeth that protrude from the ventral side of the sea urchin. These teeth are used to scrape the sediment in order to obtain food. This scraping action produces an almost constant underwater noise in areas inhabited by sea urchins. 3D and 2D visualizations based on a micro-computed tomography scan of the European edible sea urchin (Echinus esculentus). Images courtesy Alexander Ziegler, Harvard University.

The calcified tests of some sea urchins may also act as a resonator. In the Kina, a species of sea urchin found in New Zealand, the scraping of the Aristotle’s lantern against the rocks causes the fluid inside the urchin to resonate, producing sounds. There are other sounds associated with Kina feeding activity, such as the spines and feeding apparatus of the urchin scraping against rock. However, scientists found these sounds to be of lesser intensity compared to sounds produced by the exoskeletal resonance. Underwater sounds associated with grazing Kina urchins range in frequency from 800 Hz to 28 kHz and contribute to the surrounding ambient noise. Scientists found ambient sound intensity levels in New Zealand coastal waters to increase as much as 2-3 orders of magnitude (20-30 underwater dB) during the sunrise/sunset periods – an increase related to sea urchin feeding activity[18]Radford, C., Jeffs, A., Tindle, C., & Montgomery, J. (2008). Resonating sea urchin skeletons create coastal choruses. Marine Ecology Progress Series, 362, 37–43. https://doi.org/10.3354/meps07444..

Mollusks have also been found to produce sounds. Mussels use byssal threads to attach themselves to hard surfaces. At temperatures above 10 degrees Centigrade, individual byssal threads can stretch and break, producing snapping sounds. Scallops can also produce sounds when they rapidly contract the two valves of their shell to expel water, feces, and other substances from inside their central cavity. This produces a sharp “crack” followed by a long puffing sound as the two valves close. These distinct sounds range in frequency from 20 to 27 kHz[19]Di Iorio, L., Gervaise, C., Jaud, V., Robson, A. A., & Chauvaud, L. (2012). Hydrophone detects cracking sounds: Non-intrusive monitoring of bivalve movement. Journal of Experimental Marine Biology and Ecology, 432–433, 9–16. https://doi.org/10.1016/j.jembe.2012.07.010..

“Coughing” sounds are produced by scallops as they rapidly contract the two valves of their shell to expel particle matter.
Sound courtesy of Lucia DI IORIO, CHORUS (released under Creative Commons Attribution, Non-Commercial)