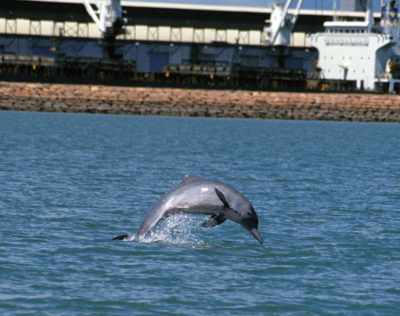 Australian humpback dolphin jumping out of the water. This species of humpback dolphin lacks the prominent hump found in other species of Sousa, and their dorsal fin is lower and more triangular. They have grey bodies with a lighter belly, separated by a darker, diagonal “cape”. Image Credit Guido Parra.

Australian humpback dolphins (Sousa sahulensis) are found in shallow nearshore waters of northern Australia and in the southern waters of New Guinea. They range in size from 1-3 m (3.3- 9.8 ft). They occur individually or in groups up to 12 but are mostly seen in smaller groups of 3–4 animals. The dolphins live in a “fission-fusion society” in which individuals associate in groups that change in size and composition according to their behavior. However, mothers and calves maintain associations that can last for up to four years. Cumulative impacts of coastal development and its associated activities (e.g., seismic surveys, dredging, blasting, pile driving, and shipping) is recognized as one of the most serious anthropogenic threats to Australian humpback dolphins. 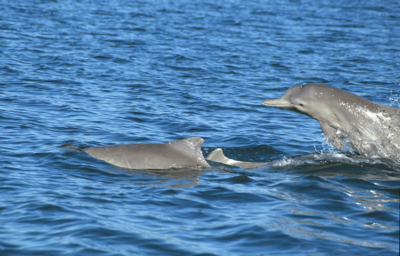 Australian humpback dolphins produce different underwater sounds described as broadband clicks, barks, quacks, grunts, and whistles. Broadband clicks span 8 kHz to at least 22 kHz. They are directly associated with foraging behavior but may also be used in social interactions. Barks and quacks are burst pulse sounds (0.6 kHz to > 22 kHz, with a duration of 0.1-8 s) and are associated with both foraging and social activities. Grunts are low frequency, narrow band sounds (0.5-2.6 kHz) produced during social activities. Whistles range widely in frequency (0.9-22 kHz) and occur during social and foraging activities. The number of whistles recorded in a group increase significantly as mother-calf pairs increase, suggesting whistles may be used as contact calls.

Like other odontocetes, Australian humpback dolphins also use biosonar, producing echolocation clicks for orientation, navigation, and foraging. These clicks have a mean source level of 199 underwater dB, center frequency of 106 kHz, and interclick intervals of 79 ms. These parameters are similar to those of other similar-sized delphinids. 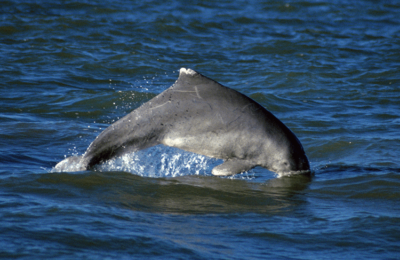