What sounds can people hear?

People don’t hear all sounds. For example, the sound a dog whistle is inaudible to people, but dogs can hear that sound. Marine animals can often hear sounds that people can’t hear. The sounds people hear best are sounds like human conversations. Scientists theorize that these animals best hear the sounds that they use every day, with their hearing dependent on the frequency and intensity of the sound and an individual animal’s hearing sensitivity 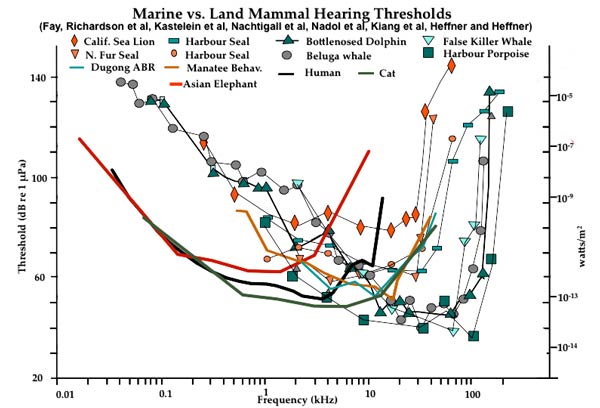 Hearing curves for some marine mammals in water and a typical human in air. There are two sets of y-axes (vertical) because different reference pressures are used to measure sound in water (re 1 µPa; left axis) vs in air (re 20 µPa; right axis). Notice that the decibel values differ by 61.5 dB for the same value of intensity (watts/ m 2). The x-axis (horizontal) is the frequency of a sound on a logarithmic scale. (Figure courtesy of Darlene Ketten, WHOI).

People can hear sounds at frequencies from about 20 Hz to 20,000 Hz, though we hear sounds best from 1,000 Hz to 5,000 Hz, where human speech is centered. Hearing loss may reduce the range of frequencies a person can hear. It is common for people to lose their ability to hear higher frequencies as they get older.

The sound intensity that scientists measure is not the same as loudness. Loudness describes how people perceive sound (see loudness). The softest sounds that young adults can hear in a frequency range of 1000 Hz to 3000 Hz have a measured sound intensity of 0 decibels relative to the intensity of a sound wave with a pressure of 20 microPascals (dB re 20 µPa).

If people could hear equally well at all frequencies, the contour lines would be flat because the same measured sound intensity would be perceived to be equally loud regardless of the sound frequency. In fact, people do not hear as well at low frequencies. Therefore, the relative sound intensity has to be much greater for a low frequency sound to be perceived to be as loud as a sound at a frequency that we hear well, such as 1000 Hertz.