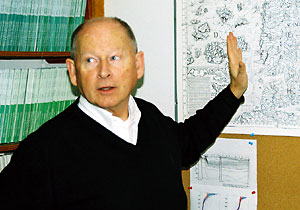 Dr. Tom Rossby is a professor of oceanography at the University of Rhode Island Graduate School of Oceanography. His research specializes in using underwater sound to study ocean currents, particularly the Gulf Stream and the North Atlantic Current. Dr. Rossby helped developed oceanographic instruments, called floats, which drift with the currents and track water circulation patterns. His research utilizes two different types of floating instruments: SOFAR and RAFOS floats. Sound Fixing And Ranging (SOFAR) floats have been used since the mid 1970s to measure and track ocean currents. These floats rely on moored listening stations at known locations to track the floats. The instruments drift with the currents and send out acoustic pulses that are picked up by the stationary hydrophones. The position of the floats are determined using time of arrival of the signal at three or more hydrophones. RAFOS floats (SOFAR spelled backward) were developed by reversing the positioning technology of the original SOFAR float. The RAFOS floats keep track of their own position by listening for signals from stationary sound sources in the water near the study area. These floats use the time of travel and the phase of the sound they receive to determine their position. RAFOS floats can be designed to float at different depths in the water column, allowing the full structure of the current, vertically and horizontally, to be studied. 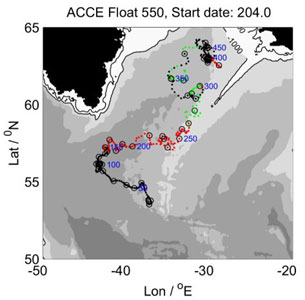 Dr. Rossby developed oceanographic instruments, called floats, that drift with the ocean currents, thus tracking water circulation patterns. Dr. Rossby’s research team is currently studying the North Atlantic Current to determine its structure vertically and horizontally, and how water is exchanged between warm and cold areas. He and his team have deployed 100 RAFOS floats for 10 months each to study the different water layers and temperatures along the paths of the floats. The paths of the floats, and therefore the general circulation patterns, can be created from the data that is collected.