How does sound travel in shallow water?

Illustration of a side view of the continental shelf. Image public domain.

In the field of ocean acoustics, “shallow water” commonly refers to coastal waters extending from the shoreline out to the edge of the continental shelf to a depth of about 200 m, where the seafloor slope increases. By this definition, shallow water accounts for approximately 8% of the ocean and seas. These regions are important because they are close to human populations and account for much of the exclusive economic zones (EEZs) of coastal nations. These regions are important for marine habitats, fisheries, national security, commerce, energy development, and recreation. 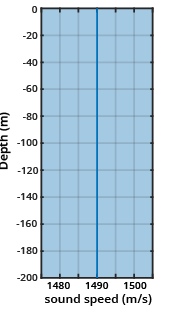 The speed at which sound travels in the ocean is faster with increasing temperature, salinity, and pressure (See How fast does sound travel?). Shallow waters are often well mixed by wind and waves in the winter, with temperature and salinity largely independent of depth. As a result, sound speed is also often largely independent of depth. This is very different from deep water, where there is a minimum in sound speed at a depth of about 1000 m in mid-latitudes, forming a sound channel or waveguide through which sound can propagate over long distances without interacting with the sea surface or seafloor (See How does sound travel long distances? The SOFAR Channel). In shallow water, sound travels on paths that interact with the seafloor and ocean waves at the sea surface.

The following figure has two parts. On the left is a plot of sound speed as a function of depth. Sound speed is the same at all depths. On the right are the paths followed by sound waves as they travel away from the source. These waves travel in straight lines until they are reflected at the sea surface or the sea floor.

Left: Constant speed of sound through the water column. Right: Paths followed by sound waves as they travel away from the source in shallow water at a constant sound speed. Credit DOSITS.

Vertical distances in this figure are greatly exaggerated compared to horizontal distances. This causes the angles from the horizontal at which sound waves travel to look much steeper than they really are. 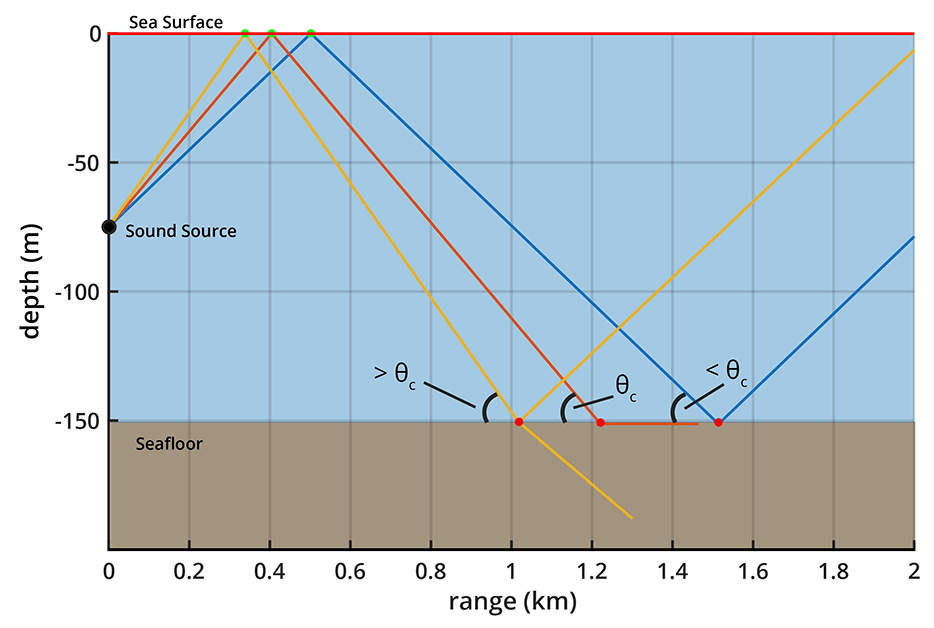 Left: Constant speed of sound through the water column. Right: Illustration of the paths between a mid-depth source and a mid-depth receiver at a constant sound speed. Only the sound waves reaching the receive are shown. Credit DOSITS.

The sound waves traveling on different paths from source to receiver have slightly different travel times. A single impulsive source will therefore be heard as a number of separate arrivals. The sound that travels directly from the source to the receiver travels the shortest path and arrives first. Sounds that reflect from the sea surface or seafloor travel further and arrive later. This is different from sound propagation in deep water where the shortest path on the sound channel axis arrives last (See Sound Travel in SOFAR Chanel for more information).

The way in which sound speed changes with depth is not the same everywhere in shallow water because the ocean temperature and salinity profiles that determine sound speed can differ greatly from one location to another and from one time to another. The variability is much higher in coastal regions than in the deep ocean. 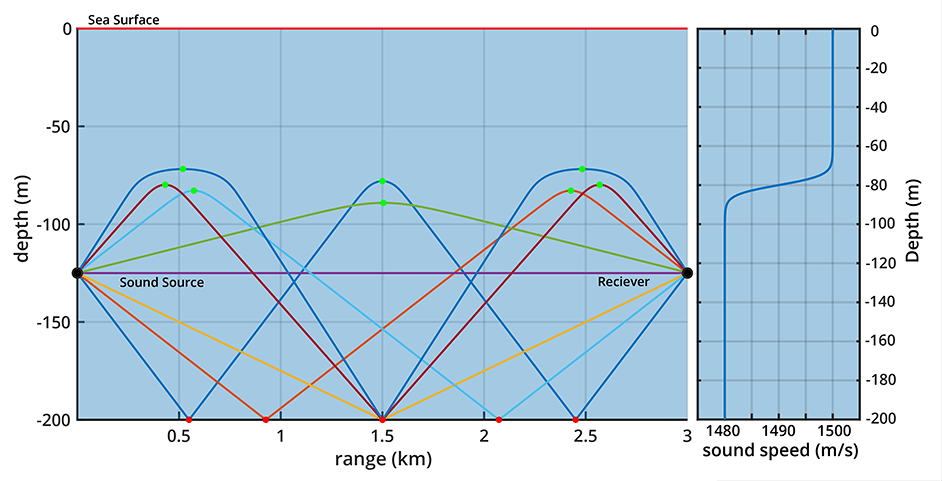 Left: Illustration of ray paths for a source located below the thermocline, showing the rays being refracted toward the seafloor when there is a summer thermocline. Right: Speed of sound through the water column when the speed is not constant. Credit DOSITS.

A sound wave traveling through the ocean is refracted (bent) whenever it encounters changes in the speed of sound (See How does sound move? Refraction). Sound waves are continually refracted toward the region of lower sound speed. Differing sound-speed profiles therefore cause sound waves to travel on quite different paths. For a three-layer profile, sound that travels upward from a source located in the cold water near the seafloor is bent back towards the seafloor when it travels up into warmer water with higher sound speeds. The result is that the sound interacts repeatedly with the seafloor and rapidly becomes weaker.

In shallow water, sound speed often varies as a function of geographic location as well as depth. For instance, on the continental shelf off the east coast of the U.S., the water’s temperature and salinity are influenced by the Gulf Stream and associated eddies. These oceanographic features can form fronts between the colder shelf waters and warmer Gulf Stream current flow. Therefore, the sound speed profiles can be complicated, changing in time and space and resulting in complex acoustic propagation. 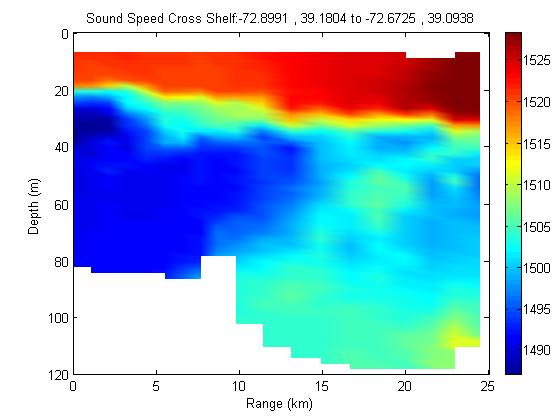 Graph of the sound speed on the shelf off the New Jersey shore. Image from Kristy A. Moore, James H. Miller, Gopu R. Potty, James F. Lynch and Arthur Newhall, “Investigation of three‐dimensional propagation effects at the New Jersey shelf break front,” Journal of the Acoustical Society of America 2007 121:5, 3126-3126.