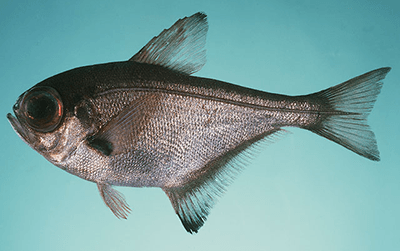 Like other members of the sweeper (Pempheridae) family, New Zealand bigeyes have a deeply keeled and compressed body, with big eyes. These small fish are active sound producers in reef environments. Image credit: FishBase

New Zealand bigeyes (Pempheris adspersa) are small, nocturnal reef fish endemic to the Southwest Pacific New Zealand waters. Like other members of the sweeper (Pempheridae) family, New Zealand bigeyes have deeply keeled and compressed bodies and large eyes. During the day, the bigeyes take refuge under overhangs and ledges or in crevices and caves. At night, they feed throughout the reef on zooplankton and worms.

New Zealand bigeyes vocalize primarily at night when they are most active. Field and laboratory recordings indicated bigeyes produce a pulsed “popping” sound with a mean peak frequency of 405 Hz and a mean duration of 7.9 ms. The calls are produced either individually or in trains of up to seven pops. 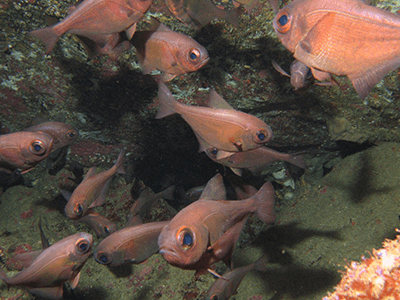