How is sound used to measure currents in the ocean?

Currents are commonly measured with sound. There are several different ways to measure currents with sound.

RAFOS floats (SOFAR spelled backwards) also use sound to measure currents. RAFOS Floats are typically used in the open ocean to measure a current like the Gulf Stream.

A technique called reciprocal transmission can also be used to measure currents with sound. 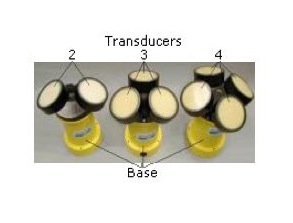 The ADCP sends out a sound that reflects off small particles and returns to the ADCP. If those particles are in a current, then those particles are moving with the current. There will be a Doppler shift in the frequency of the sound that reflects off the small particles and returns to the ADCP. That Doppler shift can be used to calculate the current speed. Most ADCPs have 3 or 4 sound sources that work together. By using several sources, the ADCP can tell the direction of the current as well as its speed. The ADCP can also tell at what depths in the water column the current is moving by how long it takes the sound to return to the ADCP.

RAFOS Floats (SOFAR spelled backward) are floating instruments designed to move with a current and track the current’s movements. 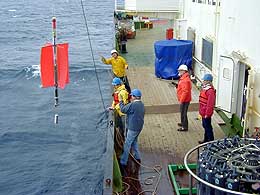 A RAFOS float being deployed. Courtesy of The RAFOS group at URI.

Acoustic Current Meters (ACM) apply this basic principle to measure ocean currents without using propellors or any other moving parts. See for example: http://www.falmouth.com/DataSheets/3DWAVE.pdf  The same basic principle has been applied to measure the average current in the Strait of Gibraltar using acoustic sources and receivers (transceivers) separated by about 20 kilometers. It has also been used to make precise measurements of ocean tidal currents using acoustic sources and receivers separated by up to about 1000 kilometers.