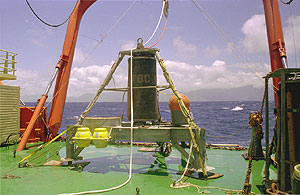 The sound source used in the ATOC project did not make sound all the time. It made sound for 20 minutes every 4 hours on every fourth day. This resulted in six 20 minute transmissions for a total of 2 hours every 4 days. The ATOC source used at Hawaii was sending a sound out at a frequency centered on 75 Hz with a bandwidth of 35 Hz (meaning the sound has a frequency range of 57-92 Hz). The ATOC project used a low frequency source because low frequencies travel farther in the ocean than high frequencies. The ATOC source was also used by the North Pacific Acoustic Laboratory (NPAL). The NPAL experiment, and transmissions from the ATOC source, ended in 2006.