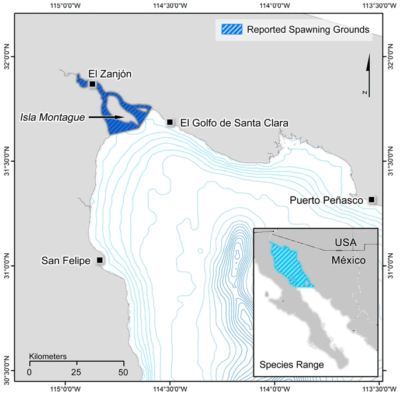 Maps showing the species range of Gulf Corvina in the Gulf of California (teal hatched area in the smaller map to the lower right), and the location of the only reported spawning grounds for the species , which is in the Colorado River Delta (dark blue hatched area in larger map). Credit: Fig 1. from Rowell, T.J., Demer, D.A., Aburto-Oropeza, O. et al. Estimating fish abundance at spawning aggregations from courtship sound levels. Sci Rep 7, 3340 (2017). Licensed under a Creative Commons Attribution 4.0 International License.

The Gulf corvina is a large-bodied, demersal species of croaker endemic to the Northern Gulf of California, Mexico. It is found in coastal waters at depths up to 30 m (100 feet). The fish can reach one meter (3.3 ft) in length and weigh up to 12 kg (26 lbs). Adult Gulf corvina mainly feed on large crabs and sardines. Juveniles feed on small fish, amphipods, shrimp, and crabs.

Gulf corvina are widely dispersed throughout the northern Gulf of California for most of the year. From late February to early June, sexually mature Gulf corvina migrate to the Colorado River Delta in the northernmost region of the Gulf of California. Here, they form a very large fish spawning aggregation (FSA) of several million fish. The aggregation can extend over 20 km along the main channels of the river mouth. Spawning, which is synchronized to the lunar cycle, occurs during the outgoing tides over a three to four-day period before each month’s new and full moons.

Male Gulf corvina produce sounds to synchronize courtship and spawning. Their collective mating chorus is so loud that it is audible in air and can reverberate through the hulls of small boats. The spawning call of individual males consists of a variable number of short pulses repeated over the duration of the call (~389 ms). Mean peak frequencies of the calls and choruses are 394 Hz and 377 Hz, respectively. Sound levels in the Colorado River Delta range between 136 and 163 underwater dB during the spawning season, compared to 100 underwater dB outside the spawning period. The spawning aggregation creates an underwater environment that is over 10 times louder than areas with few spawning Gulf corvina. In areas of the channel where sound levels could be attributed to the presence of aggregating Gulf corvina, recordings were up to 32 underwater dB louder than that measured in outlying regions of the Delta.

The intense, audible (in air) sounds associated with the Gulf corvina’s spawning activity, as well as the species’ predictable migration patterns, enables commercial gill net fishers to easily locate and harvest fish during the peak spawning period in March and April (this also coincides with a large domestic demand in Mexico for fishes because of the dietary traditions associated with the 40 days of Lent). A single panga [new glossary] fishing boat with one net can catch 2 tons of Gulf corvina within 20 minutes. The local fishing fleet is comprised of 500 pangas and can harvest up to 5900 tons (~ 2 million Gulf corvina) in 20 days of fishing. 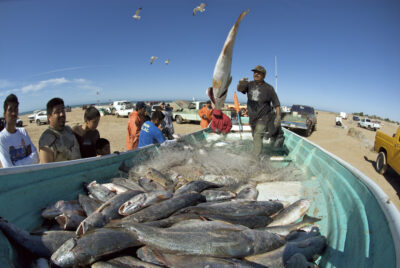 Audible (in air) sounds associated with the spawning activity of Gulf corvina help commercial gillnet fishermen to locate large aggregations of the fish in the Gulf of California. Millions of fish are caught during the short, 20-day fishing season each year. Image credit: Timothy J. Rowell, Octavio Aburto, and the Gulf of California Marine Program.

Given this intense fishing pressure, which has occurred for decades, the species is highly vulnerable to overexploitation that may lead to population collapse. Gulf corvina are listed as “vulnerable” by the American Fisheries Society and the International Union for the Conservation of Nature (IUCN).

A regional ban on commercial gill nets has been implemented to protect two endemic and endangered marine species in the region, the vaquita porpoise and the fish, totoaba. Additionally, a no-take marine protected area (MPA) has been designated around the principal spawning grounds for Gulf corvina in the Colorado River Delta (dark blue hatched area in the map provided). However, it is poorly enforced and illegal gill net fishing continues. Indigenous communities who reside along the river are permitted to fish within the no-take MPA.

Understanding Gulf corvina movements, spatial distributions, spawning behavior, and associated fishing activities are critical for effective management and conservation of this species. Active and passive acoustic technologies can be used to determine Gulf corvina distribution, abundance, biomass, and sounds produced during and after the spawning period.