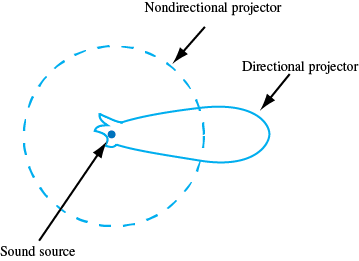 Path of sound from directional and nondirectional projectors. Adapted from Urick, 1983.

Examples of directional projectors are echosounders and side scan sonars. Echosounders that are used to measure ocean depth are designed to point down toward the seafloor (see Echosounder). Side scan sonars have narrow beams directed perpendicular to the direction in which the sonar is being towed, to image the seafloor on either side of the ship track (see Side Scan Sonar).

The source level of individual SURTASS-LFA projectors is about 215 underwater dB; therefore, the source level of the overall projector array is theoretically 215 + 25 = 240 underwater dB in the direction of the beam. Although the source level of a projector array is defined at a range of 1 m from the array, the sound level in the ocean is never that high. This is because the sound pressure levels close to the array are a complicated sum of the sound waves transmitted by each of the array elements. The diagram below illustrates how the sound waves from the individual projectors merge at a distance from the array to create the effect of a single stronger source. The equivalent source level of the point source is 227 dB re 1 uPa because the figure below only shows 4 elements in the array rather than the full 18 elements that the SURTASS LFA projector really includes.. 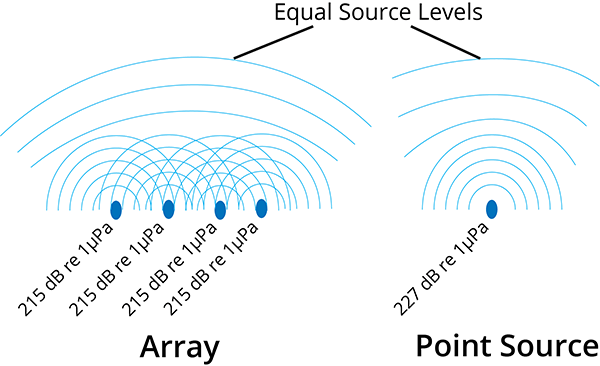 Comparison of source level for a four element projector array and a point source. Copyright URI

The sound field close to the array is irregular and does not fall off smoothly with distance, as it does far from the array. Therefore, the source level of an array must be calculated from measurements at much larger ranges. The equivalent or effective source level at 1 m is then calculated assuming spherical spreading.