Scientists characterize sound sources by the types of signals they produce. The Audio Gallery includes a wide variety of sounds that can be heard under water, from whales, pinnipeds, and fishes to natural and anthropogenic sounds. The signals are distinguished from one another by the amount of energy at specific frequencies or times.

Acousticians often analyze a signal by computing its spectrum. A spectrum is a catalog of the amplitude of a signal as a function of frequency or pitch, with graphics showing low frequencies on the left of the x-axis and high frequencies on the right. Marine mammals’ vocalizations can be characterized by their spectra. For example, a fin whale can vocalize near 20 Hz, a humpback whale can vocalize at 600 Hz, and a bottlenose dolphin can vocalize at 40 kHz.  If one computes spectra for these vocalizations, these spectra would show significant amplitudes at these frequencies for each marine mammal. 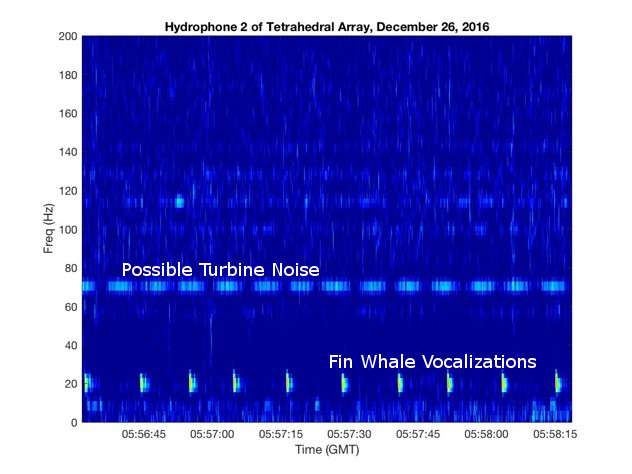 Scientists can compare sounds with examples of known signals with matched-filter processing. A good example of matched-filter processing occurs with echosounders, from which a short signal (ping) travels downward through the water, reflects off the ocean bottom or other objects in the water column, and is received and recorded at the device. Because the outgoing pulse characteristics are known, the returning sounds can be match-filtered with the outgoing pulse to determine the precise timing of the echoes and increase their signal-to-noise ratio (SNR). One use is to measure the travel time to and from the seabed. By knowing how fast sound travels in water, echosounder data can be used to estimate the water depth.

Matched filtering works particularly well when a known signal is transmitted at a specific location and time (knowing the what, where, and when the signal was transmitted). Because the receiver knows the what, where, and when of the transmitted signal, special signal processing can be used to detect the received signal even when the received signal is less intense than the ambient noise. The signal-to-noise ratio (SNR)is a decibel measure of the relative amplitude of the signal compared to the noise (for more detail, please visit the Advanced Topic on the Sonar Equation). Using pulse compression, signals with negative SNR can be detected using a matched filter. In fact, signal processing experts coined the term compression gain, which is a decibel measure of the increase in SNR after matched filtering.

Signals can be designed with certain properties to increase detection. The ability to detect a signal is determined by the bandwidth of the signal and its duration or the duration over which the receiver can observe the signal of interest. One solution for increasing detection has been to use signals called chirps. Chirps are signals in which the frequency changes with time. A chirp signal can sound like a bird’s chirp.

This sound is an example of a chirp signal, in which the frequency increases from 1 kHz to 4 kHz over 1 second. The chirp is repeated after a short period of silence.

Beamforming is another signal processing technique for improving the detection of weak signals in loud noise.  If a desired signal is recorded on multiple hydrophones, and the hydrophones are not spaced too far apart, then the signal characteristics on each recorder (or “channel”) will be similar.  By contrast, the background noise on each channel will display some random variation. If the recordings on each channel are time-delayed appropriately and added together, the resulting “beamformed” signal will reinforce the signal’s amplitude while reducing the amplitude of the noise, thus increasing the signal-to-noise ratio (SNR) of the final output signal.  Beamforming also extracts information about the signal source’s location, such as its bearing.  Unlike matched-filtering, beamforming does not require knowledge of the characteristics of the original signal. Simple mathematical models of beamforming predict that a signal present on 10 hydrophones will experience an “array gain” of 10 dB SNR, while a 100-hydrophone system will experience an array gain of 20 dB SNR.  The actual change in SNR will vary depending on the exact characteristics of the noise.  Matched-filtering, when combined with beamformed signals, can make signals detectable that were originally swamped by noise in a single hydrophone recording.

Signal processing is not only used in acoustics, but has many other applications. One example is with graphical images, such a photographs or x-rays. Technicians will used matched filtering to compare the image of a known object, such as an animal or healthy tissue, against the photograph or x-ray, respectively. By knowing what to look for, sometimes called a search image, technicians can be much more accurate with their identifications. Beamforming is also used in radio and television where an antenna includes multiple transmitters or receivers that give directionality to the signals.