We have probably all heard echoes – when our voices repeat in large rooms, canyons, or tunnels. But what are echoes? How are they created? Echoes are reflections. Sound bounces off a surface such as the canyon walls and returns so you hear it again. Just as a mirror reflects light, hard surfaces such as canyon walls reflect sound.

When looking at a mirror, images of objects can be seen without directly looking at those objects. A car’s rearview mirror allows drivers to see objects behind them without having to turn around. This is possible because the angle of incidence is equal to the angle of reflection. The following diagram explains this angle: 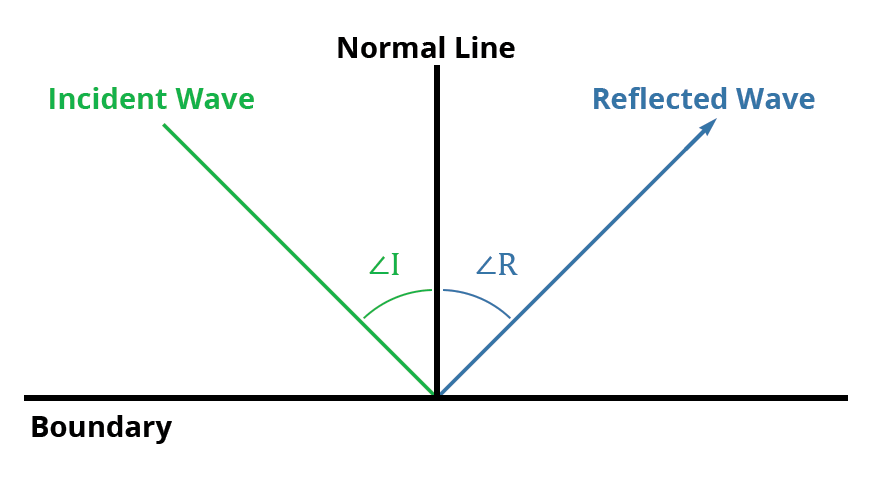 A flat mirror is a nearly perfect reflector for light – the amount of energy in the reflected wave is equal to the amount of energy in the incident wave. The underside of the ocean surface is a nearly perfect reflector for sound under calm conditions, particularly at low frequencies. When the incident wave hits other types of boundaries, such as the seafloor, a portion of the acoustic energy is reflected back into the original medium (the ocean), and a portion of the energy is transmitted into the second medium (the seafloor). The amount of sound that is reflected and transmitted depends on the acoustic properties of the two media and on the angle of incidence. The more similar the acoustic properties of the two media, the less reflection and the more transmission occurs. The less similar the two media, the more reflection and the less transmission occurs. A seafloor of hard bedrock is a better reflector than watery sand. Therefore, sound waves will bounce better off the hard bottom.