How do marine animals use sound?

Many marine animals rely on sound for survival and depend on unique adaptations that enable them to communicate, protect themselves, locate food, navigate underwater, and/or understand their environment. They may both produce sounds and listen to the sounds around them.

Sounds are particularly useful for communication because they can be used to convey a great deal of information quickly and over long distances. Changes in rate, pitch, and/or structure of sounds communicate different messages. In particular, fishes and marine mammals use sound for communications associated with reproduction and territoriality. Some marine mammals also use sound for the maintenance of group structure. 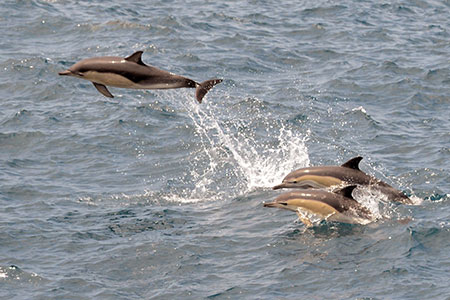 Dolphins, such as these common dolphins (Delphinus spp.), travel in large groups, therefore, sound is important for communication to maintain group structure. Photo courtesy of NOAA/NEFSC.

Similar to sonar systems on ships, some whales use sound to detect, localize, and characterize objects. By emitting clicks, or short pulses of sound, these marine mammals can listen for echoes and detect objects underwater. This is called echolocation. Some whales and dolphins use echolocation to locate food. They send out pulsed sounds that are reflected back when they strike a target. The analysis of the echoes helps the animals determine the size and shape of an object, its location, whether it is moving, and how far away it is. Echolocation is an effective way to locate prey and also helps whales and dolphins analyze their environment.

Toothed whales, such as these orcas, use sound to locate prey. Photo courtesy of NOAA/NMFS.

Many species of fish and aquatic invertebrates also use sound. Fishes produce various sounds, including grunts, croaks, clicks, and snaps, that are used to attract mates as well as ward off predators. 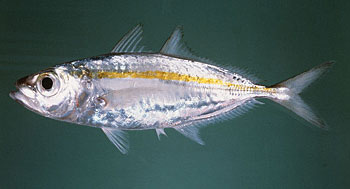 Big eye scad, a tropical fish, produce sounds using their pharyngeal teeth. These sounds are often heard when a fish is captured and may function to ward off predators. Photo courtesy of John E. Randall. 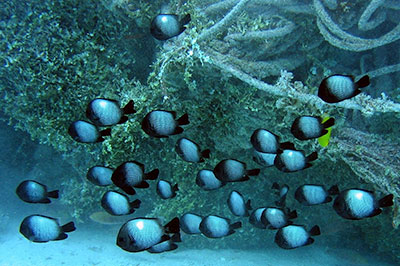 The larvae of some coral reef fish species like these damselfish, may use sound to locate suitable settlement areas. Image credit: NOAA.

Cleaner shrimps identify themselves as a “cleaner” and advertise their services to reef fish by clapping their claws (chelipeds). The hungrier the shrimp, the more clapping it does. In this video, one can watch a cleaner shrimp (small, transparent animal at center) clap/signal to reef fish swimming nearby.
Video by Lucille Chapuis, University of Western Australia