Echosounders are a type of sonar commonly used for a variety of tasks, including navigation, measuring bottom depth, and detecting schools of fish and plankton. Single beam echosounders emit a pulse of sound in a narrow cone (2°-12°). 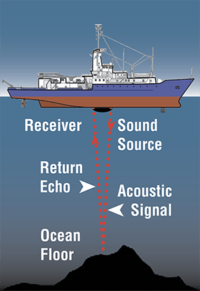 Echosounders estimate bottom depth by measuring the time it takes for the acoustic signal to reach the bottom and the echo to return to the ship. Image Credit DOSITS.

Another type of echosounder, multibeam sonar, was developed to produce more detailed maps of the seafloor. These systems produce a fan-shaped beam (see figure) that spreads downward to the seafloor. The area of the ensonified seaflooris called the swathand is typically 1° by 120° wide. 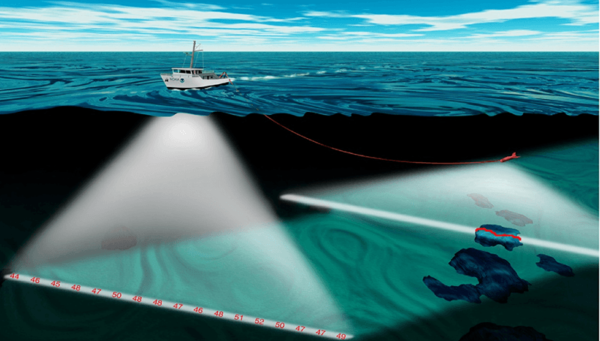 Most fishes do not hear in the frequencies used by echosounders. Some species in the herring family have been shown to respond to frequencies up to 200 kHz.  Research suggests American Shad change schooling behavior in the presence of a 120 kHz echosounder.