Sonar (SOund Navigation And Ranging) is the name of a technology that is used to detect objects in water and within the seafloor. There are two basic types – passive and active. Passive sonars listen for underwater sounds. Active sonar systems emit sounds and use returning echoes to detect, locate, and classify objects in the environment. For example, differences among echoes are used to determine whether an object is a submarine, rock outcrop, school of fish, or a whale. There is concern that active sonar systems may affect marine animals.

This recording is of an active sonar that is tracking a close target. Sound courtesy of J & A Enterprises.

In addition to different frequencies, sonars can emit signals with different waveforms and durations. For example, tones may be transmitted at a single frequency, frequency-modulated (FM) upsweeps or downsweeps. These signals range from continuous active sonar (CAS) to short duration pulses of less than one second.

Because marine animals vary in their hearing sensitivities, both the frequency and duration characteristics of sonar systems are important factors about what species may be affected by any given sonar signal. Thus, it is important to consider the sound source and its transmissions, as well as the species likely to be exposed to determine the potential effects. 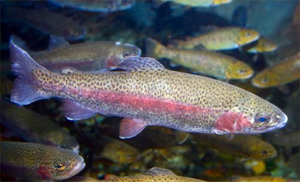 The inner ear and other tissues of some fish species, including the rainbow trout (shown here), showed no physiological damage when exposed to intense sounds associated with low-frequency (170-320Hz) and mid-frequency (2.8-3.8 kHz) sonar. Image credit: U.S. Environmental Protection Agency.

The graphs show the distribution of humpback whale song length (in minutes) during control periods when no sounds were being played (top) and during experimental conditions when LFA sounds were being played (bottom). The two graphs look similar and show that there is considerable variation in the length of humpback whale songs. The songs were slightly longer during LFA playbacks. Graph from data in Fristrup, K. M., Hatch, L. T., & Clark, C. W. (2003). Variation in humpback whale (Megaptera novaeangliae) song length in relation to low-frequency sound broadcasts. The Journal of the Acoustical Society of America, 113(6), 3411.

Because marine mammals have hearing that ranges from infrasonic to ultrasonic frequencies, sonars may also affect them. Three controlled exposure studies using SURTASS LFA sonar systems investigated the behavioral responses of marine mammals with good low-frequency hearing. The studies focused on blue and fin whales foraging off southern California, gray whales migrating along the California coast, and humpback whales in breeding grounds off Hawaii. Individual whales were followed visually and/or acoustically to document their behavior before, during, and after exposure to the sonar. Blue and fin whale behavior was found to be more influenced by prey location than received sonar signals[9]Croll, D. A., Clark, C. W., Calambokidis, J., Ellison, W. T., & Tershy, B. R. (2001). Effect of anthropogenic low-frequency noise on the foraging ecology of Balaenoptera whales. Animal Conservation, 4(1), 13–27. https://doi.org/10.1017/S1367943001001020.. Gray whales altered their migration path away from the sonar source when it was located in the center of their migration corridor. However, when the sonar was moved to the edge of the migration corridor, the whales did not change direction, even when exposed to similar received levels[10]Buck, J. R., & Tyack, P. L. (2000). Response of gray whales to low‐frequency sounds. The Journal of the Acoustical Society of America, 107(5), 2774–2774. https://doi.org/10.1121/1.428908.[11]Ellison, W. T., Southall, B. L., Clark, C. W., & Frankel, A. S. (2012). A New Context-Based Approach to Assess Marine Mammal Behavioral Responses to Anthropogenic Sounds: Marine Mammal Behavioral Responses to Sound. Conservation Biology, 26(1), 21–28. https://doi.org/10.1111/j.1523-1739.2011.01803.x.. Although there is variation in humpback whale song length, studies with LFA sonar exposure show singing humpback whales increased song length by 29% during sonar transmissions. Songs were 10% longer for up to two hours after sonar transmissions ceased[12]Miller, P. J. O., Biassoni, N., Samuels, A., & Tyack, P. L. (2000). Whale songs lengthen in response to sonar. Nature, 405(6789), 903–903. https://doi.org/10.1038/35016148.[13]Fristrup, K. M., Hatch, L. T., & Clark, C. W. (2003). Variation in humpback whale (Megaptera novaeangliae) song length in relation to low-frequency sound broadcasts. The Journal of the Acoustical Society of America, 113(6), 3411. https://doi.org/10.1121/1.1573637..

In summary, there is considerable variability in the probability and the degree of a behavioral response[31]Southall, B., Nowacek, D., Miller, P., & Tyack, P. (2016). Experimental field studies to measure behavioral responses of cetaceans to sonar. Endangered Species Research, 31, 293–315. https://doi.org/10.3354/esr00764.. This appears to be because of individual and species differences in sensitivities to sounds, as well as differences in an animal’s behavioral state when an exposure occurs. The context, such as whether the source is moving towards or away from the animal, as well as the speed at which the source is moving, and whether an animal is motivated to remain in an area, also seem to matter. Despite this variability, received sound levels remain an important component to consider when determining the potential effects of sonars.