Images of Indo-Pacific Humpback dolphins in Hong Kong waters. The species has a robust body, with rounded pectoral fins, a long, narrow rostrum, and a dorsal fin situated on top of a “hump” on its back. Body coloration can vary from white to pink with heavy spotting. Image credit: T.A. Jefferson.

The Indo-Pacific humpback dolphin (also known as Sousa, Chinese white dolphin, and pink dolphin) is found throughout Southeast Asian waters and is thought to be declining throughout its range. Their acoustic repertoire is similar to that of other dolphin species, with broadband click trains, burst pulses, and narrow-band, frequency-modulated whistles. In Sanniang Bay, China, the dolphins were found to produce broadband, high frequency (ultrasonic) echolocation clicks (mean peak frequency 109 kHz), similar to those of other species, such as bottlenose dolphin and Risso’s dolphin. For dolphins in Hong Kong waters, burst pulses had a large frequency range from 0.6 to > 2.2kHz. Whistles range from 0.52 to 33 kHz. Differences in duration and frequency modulation across locations may be related to local ambient noise. 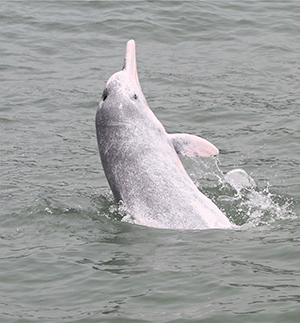 The distribution of humpback dolphins makes them vulnerable to impacts from human activities, including disturbance from anthropogenic noise. The underwater habitats of Indo-Pacific dolphins are inherently noisy, impacted primarily by shipping and other vessel traffic. Mid- to high-frequency underwater noise associated with high-speed ferries and small high-speed boats were found to overlap in frequency with Indo-Pacific humpback dolphin communication and echolocation signals, and is within the hearing range for the species. More data on population distributions, bioacoustics behavior, physiology of humpback dolphins, prey distributions, as well as noise characteristics are needed, especially as rapid coastal development continues in the species’ range.