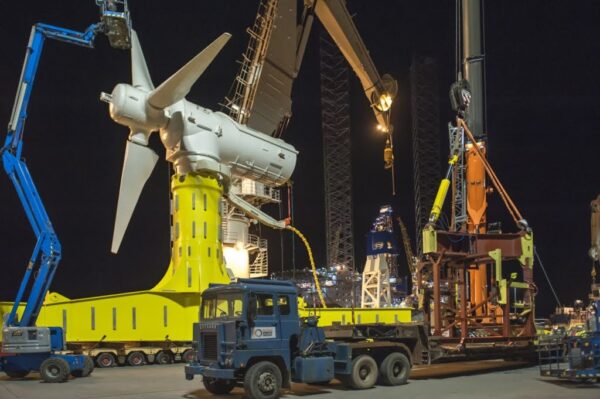 Tidal turbines can reach heights of 26 meters (85 feet) with rotor diameters of 16-18 m (52-59 ft). They can rest directly on the seafloor (like the turbine shown here) or float in the water column. Tidal turbines can also be deployed in single installations or as an array of multiple units. Image credit Simec Atlantis Energy.

Tidal energy production is a form of renewable hydropower where energy associated with the natural rise and fall of ocean tides is converted into electrical power. Tidal turbines are one form of tidal energy production. These turbines stand upright in the water column and can consist of an open center system or a vertical shaft with rotor blades that spin. The turbine can be installed individually or as a multiple unit array. The mechanical energy produced by tidal currents turns the turbine blades, which are connected to a generator. The generator produces electricity, which is then transmitted to shore by a cable laid directly on the seabed.

Tidal energy production is considered to be a reliable renewable power source for coastal areas. Adoption of tidal energy production on a broad scale has been slow, however. This may be due to higher costs associated with tidal energy plant construction, as well as the specific site requirements necessary for turbine installations. Tidal plants are built along coastlines with minimal height requirements (tidal range of at least 7 m), where they can take advantage of high tidal current velocities and/or strong and continuous ocean currents. Areas where current speeds are amplified by the funneling effect of the local coastline and seabed (e.g. narrow straits and inlets) are ideal. Human-made tidal lagoons can also be built to enclose tidal areas.

There is also concern for potential impacts associated with tidal turbines. Environmental concerns have largely focused on the potential risk of animals colliding with underwater turbine blades. There is also concern about the creation of electromagnetic fields and how underwater sound generated during the construction, operation, and decommission of tidal systems may impact marine animals. Making acoustic measurements in tidal environments is challenging, however, and acoustic studies of tidal turbines are limited.

Measurements of underwater sound produced by active tidal turbines in Scotland and France show signals to be tonal and low frequency (50 to 8200 Hz). Higher frequency signals (up to 20 kHz) have also been detected and were linked to mechanical processes inside the turbine (e.g. the generator). Underwater sound levels were highest in close proximity to active turbines and decreased with distance. Within 20 m of the operating Atlantis AR1500 turbine, a 1.5 MW three bladed horizontal axis tidal-stream turbine in the Pentland Firth, Scotland, third-octave band sound pressure levels were elevated by up to 40 dB relative to ambient conditions. At the maximum recording distance of 2300 m from the turbine, median sound pressure levels when the turbine was operational were still over 5 dB higher than ambient conditions alone. Ambient noise conditions at 50 to 1000 Hz fluctuated by about 5–10 dB between different tidal states. Sound levels were also related to operational speed, and were reduced when turbine blades spun at lower velocities. Turbine rotational speed is positively linked to current speed.

Underwater sounds associated with operational tidal turbines may be detectable by local marine animals. Turbine signals associated with the Atlantis tidal turbine in Scotland may be detected by harbor seals and porpoises at distances of at least several hundred meters from the active turbine. Measurements at the 2.2MW Arcouest tidal current turbine in Northern Brittany (France) indicate low frequency tidal turbine sounds may be detected by harbor porpoise, grey seals, and bottlenose dolphins at distances of 1 km, 300 m, and 250 m, respectively. Potential effects of tidal turbine sound on marine species are not well studied. Harbor porpoise click activity was significantly reduced when a tidal turbine was operating in Bay of Fundy, Canada. Measurements at ~200 m from the active turbine showed reduced click activity; however, at sites more than 1 km from the operational turbine, click activity was not reduced. Harbor seals demonstrated avoidance behavior to sounds from operating tidal turbines. Turbine sounds may actually act as a cue to help seals avoid potential collision.