Highlights: Strandings
Whales sometimes come ashore and are stranded. There have been incidents in which there was a relationship between the time and location of beaked whale strandings and the use of multiple, mid-frequency sonars in nearshore areas. Why these whales stranded is not understood . Additional research is needed to increase our knowledge of ocean noise and how marine mammals respond to it.

The term stranding refers to an aquatic animal, especially a marine mammal, landing on a beach or in shallow water, dead or sometimes alive, and probably in distress. Observations as far back as Aristotle and illustrations from the Middle Ages show us that marine mammals have been stranding for millennia.

In the U.S. alone, about 1,000 cetaceans and 2,500 pinnipeds strand annually. Some animals strand live and are returned to sea. Others die at sea or on shore. Animals may strand singly or in groups. When 3 or more animals strand together in time and place, it is called a mass stranding. Some species, such as pilot whales, mass strand fairly often. Whether strandings are single or mass, strandings are a concern for conservationists and biologists. Determining the cause of a stranding or death of a stranded animal is difficult. Scientists must reconstruct what happened, but have little or no information about the animal’s history or the circumstances that preceded the stranding. On average, a cause of death can be determined in only about half of all stranding cases. 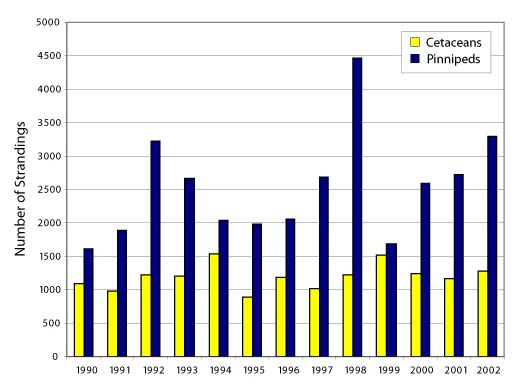 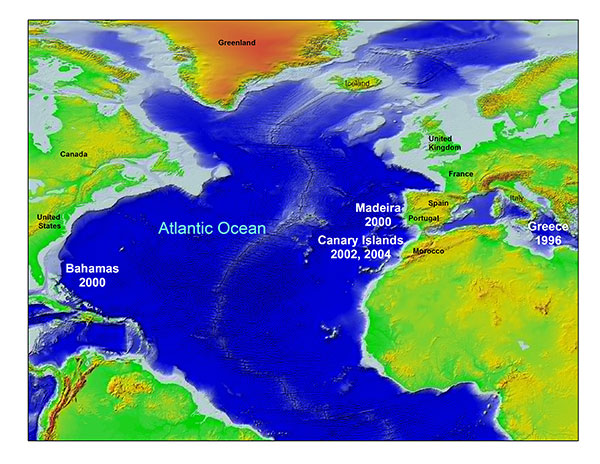 A number of explanations have been proposed for the observed injuries in the animals that stranded in the areas of sonar exercises. These tentative explanations, called hypotheses need to be tested through experiments and checked for consistency in any further observations in order to determine whether they are correct.

One hypothesis that has been proposed to explain the internal hemorrhaging that was observed in the Bahamas stranding is that tissue damage can occur when resonance from loud sounds causes air- or fluid-filled organs (such as the lungs or swim bladder) to vibrate at very large amplitudes. As the organs vibrate, blood vessels and tissues of the organs might become damaged. NOAA held a workshop in 2003 to discuss resonance in cetaceans (for more information see PDF Report of the Workshop on Acoustic Resonance as a Source of Tissue Trauma in Cetaceans). The workshop concluded that acoustic resonance was not likely the cause of the injuries in the Bahamas stranding for several reasons. One reason was that the mid-frequency (1-10 kHz) sonars did not operate at the lung’s resonant frequencies.

A hypothesis that has been proposed to explain the gas bubbles and tissue damage observed in the stranding in the Canary Islands is that they were consistent with decompression sickness. The scientists suggested that beaked whales might have changed their diving pattern in response to the sounds and come to the sea surface faster than normal, causing bubbles to form in the tissues. This hypothesis is still being debated and more research is needed to develop conclusive answers. The gas bubbles and tissue damage that have been observed could have resulted from many causes, some that are not related to sound. A recent report has found degeneration in the bones of sperm whales specimens obtained over the last 111 years. The scientists hypothesize that the degeneration is due to bubble formation associated with decompression sickness that is unrelated to sound. These hypotheses about decompression sickness, bubble growth, and degeneration in the bones of sperm whales have not been tested, and they should not be used as scientifically accepted explanations until they are. They are basically ideas that scientists are now testing and may or may not be correct.

Another hypothesis to explain the cause of the tissue damage is that sound causes bubbles to form or grow in tissues that are supersaturated with nitrogen. One way this could happen is through a process called rectified diffusion. In this hypothesis, sounds cause small bubbles that normally exist in the blood and tissues to grow larger. It is unlikely that this process caused the tissue damage observed in the Bahamas stranding because the sound exposures were too short. However, if sound caused bubbles to form or grow, they would continue to grow by static diffusion as long as the tissues remained supersaturated, which could resulting in tissue damage. Whether or not this hypothesis is plausible for marine mammals is still being debated.

Much more scientific research is needed to understand why there is a relationship in time and location between the beaked whale strandings and the use of multiple, mid-frequency sonars in nearshore areas. At present, it is uncertain whether stranding events are limited to beaked whales and near shore areas. Science is an evolving process and future work may help us further understand what we are observing.

Next: Determine if a sound
affects a marine animal