How is sound used to measure global climate change?

Satellite measurements will help, but they only provide information at the ocean surface. Measurements made by drifting buoys that send data back by satellite will also help (http://www.argo.ucsd.edu/), but data from many buoys will have to be averaged. Using sound to measure ocean temperatures directly provides the large-scale average temperatures needed to study climate change (http://atoc.ucsd.edu/).

Acoustic tomography can be used to measure the temperature of the ocean over large areas. A sound source sends out a sound signal at known times. The sound is sent out in the SOFAR channel so that it will travel as far as possible. Low-frequency sound can travel thousands of kilometers in the ocean. Hydrophones all over the ocean basin listen for the sound. The time taken to travel to each hydrophone is then calculated and the average temperature determined. The results apply to large areas of the ocean, necessary for understanding climate change.

The time taken to travel to the hydrophone can be measured to within 20-30 milliseconds (20-30 thousandths of a second) at ranges of up to 5000 kilometers. The travel time over 5000 kilometers (3100 miles) is about an hour. This travel time accuracy lets us determine the average temperature to within a few millidegress (thousands of a degree) Celsius. Changes in travel time are due to changes in ocean temperature. The change in temperature can be measured to within 0.001 degrees Celsius per day. The ATOC (Acoustic Thermometry of Ocean Climate) project measured average temperatures in the North Pacific Ocean, for example, along a number of paths. Acoustic sources off central California and north of Kauai transmitted to U. S. Navy receivers, giving a sparse network of acoustic paths. They observed large-scale seasonal changes in ocean temperature of up to 2 degrees Celsius. This test verified that the technique does work. Transmissions continuing for many years could be used to measure large-scale climate change in the ocean. Transmissions are continuing from the ATOC source north of Kauai as part of the NPAL (North Pacific Acoustic Laboratory) program. 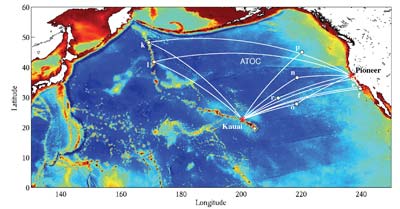 The sound sources used in the ATOC and NPAL projects do not make a sound all the time. They typically make sound for 20 minutes every 4 hours on every fourth day. This results in six 20 minute transmissions for a total of 2 hours every 4 days. The sources send a sound out at a frequency centered on 75 Hz with a bandwidth of 35 Hz (the sound then has a frequency range of 57-92 Hz). The ATOC project used a low frequency because low frequencies travel further in the ocean than high frequencies.

You can listen to this sound of the ATOC source below. You will need headphones or external speakers on your computer to hear the sound (75Hz is too low a frequency for most built in speakers). This recording of the ATOC source north of Kauai was amplified so you can hear it better.