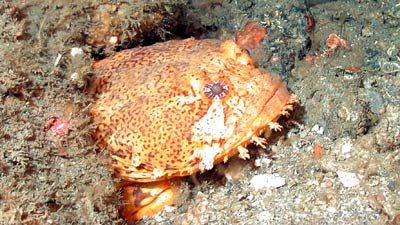 The oyster toadfish is a bottom dwelling species which occurs along the east coast of North America from the West Indies to Cape Cod. It inhabits shallow water areas and is most commonly found residing among rocky substrate, but any debris that provides shelter (including trash) makes suitable habitat for this species. As such, this fish is considered to be tolerant of somewhat polluted waters. Because of its large geographic range, spawning times may vary due to temperature differences. In the northern part of its range, spawning occurs during June and July but may occur later in the year in the southern portions of its range. In preparation for spawning the male builds a nest, often comprised of debris lying about the bottom including small shells, rocks, cans, wood, etc. Upon completion of the nest the male will signal to females, using the “boat-whistle” call, that he has created a suitable location for spawning. A female, attracted by the male’s call, will deposit eggs into the nest and swim off. After this, it is the responsibility of the male to guard the nest from predators and care for the developing eggs. After hatching, baby toadfish are independent of parental care. Both males and females mature in their second year and live to approximately 8 and 5 years, respectively.The signature “boat-whistle” call of the toadfish is produced by the male through rapid contraction of the sonic muscleagainst the swim bladder. The call is produced at the nest site (built by the male) and is used to court females for spawning. Coarse grunting and growling sounds are also emitted by both sexes indicating fear or annoyance.