Sound levels in the ocean are not constant, but differ from location to location and change with time. Different sources of sound contribute to the overall noise level, including shipping, breaking waves, marine life, and other anthropogenic and natural sounds.

At low frequencies (20–500 Hz), the background sound level is dominated by noise from distant ships in many places in the ocean, even when there is no nearby ship. When a large ship passes close to a receiver, the noise that is generated will temporarily increase the sound levels at that location substantially. This is particularly true in areas of heavy shipping traffic, such as the area off the New England coast shown below. 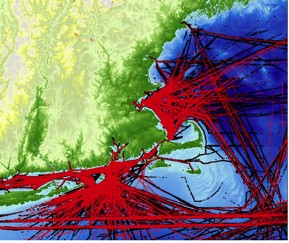 Red and black lines are large commercial ship tracks from April and May 2006, respectively, off the northeast coast of the United States. Vessels are tracked using the U.S. Coast Guard’s Automatic Identification System. (Reprinted [with modifications] from Hatch et al., 2008.)

Marine mammal calls can increase low-frequency underwater sound levels by 20–25 underwater dB in some locations at certain times of year. The ambient noise levels at frequencies of 17–20 Hz increase off coastal California during the fall and winter months due to blue and fin whale calls.

Spectrogram from a receiver on the continental slope off Point Sur, California, from January 1995 to January 2001,using 1-day averages. The increase in ambient noise at 17–20 Hertz during the fall and winter is due to blue and fin whale calls. (Reprinted with permission from Andrew et al. 2002.)

In the frequency range 500-100,000 Hz, ambient noise is mostly due to spray and bubbles associated with breaking waves. It increases with increasing wind speed. A storm passing over a receiver can temporarily increase mid-frequency sound level by 30 underwater dB or more, depending on the strength of the storm. 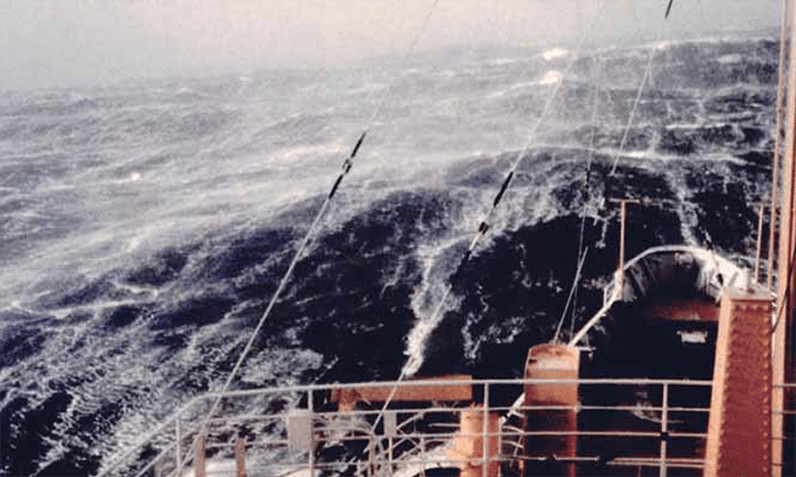 Heavy rain associated with a storm can increase noise levels by up to 35 underwater dB across a broad range of frequencies extending from several hundred hertz to greater than 20,000 Hz.

One way to characterize the variability in underwater sound levels at specific locations is to make plots showing how often various sound levels occur. In these plots, a relative frequency of 0.1 means that sound level was observed 10% of the time.

Histograms showing the distribution of sound levels (dB re 1 µPa2 / Hz) at 50 Hz and 400 Hz as observed at a receiver on the continental slope off Pt. Sur, California, from November 1994 to December 2000. Each bin in the histogram is one dB wide. (Courtesy R. Andrew, Applied Physics Laboratory, University of Washington.

Note that the observed distributions in the figures above are not symmetric, but rather tend to have “tails” extending toward higher sound levels. The average values (means) are therefore slightly greater than the medians. If the distributions were symmetric, the means and medians would be the same. At these relatively low frequencies, the occurrences of high sound levels are likely due at least in part to ships passing close to the receiver. It is important to take account of the distribution of observed sound values when assessing the potential importance of the ocean noise to marine life. 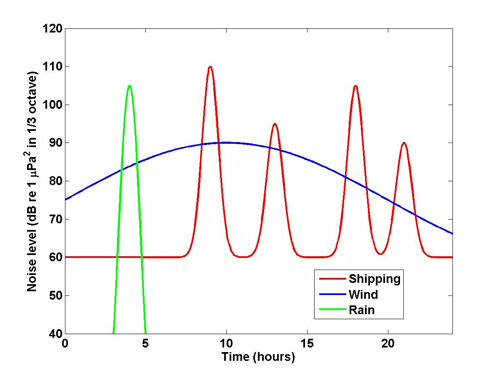 An example of possible contributions to sound levels at a receiver from shipping, wind, and rain at 500 Hz in a 1/3-octave frequency band over a day. Courtesy J. Miller, University of Rhode Island.

A noise budget is a listing of the various sources of noise at a receiver and their associated ranking by importance. It compares different sources of underwater sound, at particular geographical locations and in different frequency bands, averaged over time. A noise budget characterizes the magnitude of sound intensity or energy in the underwater sound field from various sources.

Ambient noise measurements made in the Ionian Sea, near Greece, with Passive Acoustic Listeners (PALs) have been used to determine the noise budget in 1/3-octave bands for this location. Ambient noise levels are often characterized by giving the noise level in 1/3-octave bandwidths. An octave is the interval between two frequencies when the higher frequency is twice the lower frequency. The center frequencies of the octave bands used in acoustics are usually chosen to be:

Each octave band is in turn split into three bands to give 1/3-octave bandwidths, providing a more detailed description of the frequency content of the noise. 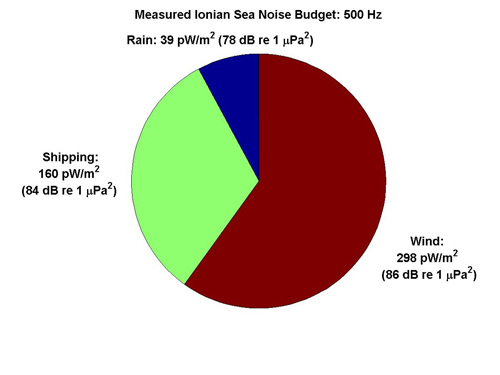 The pie chart shows that the 1/3-octave band of frequencies centered at 500 Hz in the Ionian Sea is most often dominated by wind-generated noise, followed by shipping noise, and finally by noise generated by rain.

Noise distributions and noise budgets are used in marine mammal masking studies (see What are the anthropogenic effects of sound on marine mammals? Masking), habitat characterization, and environmental studies. They are also used when designing acoustic communication and sonar systems.