In early experiments to determine the speed of sound, such as that carried out by Colladon and Sturm in 1826, the measurements were not very accurate. The value that they reported for the speed of sound in Lake Geneva, Switzerland, at a temperature of 8°C was 1435 m/s, which is about 4 m/s slower than the modern value for fresh water at 8°C and atmospheric pressure (1439.07 m/s). If the measurement had been repeated 100 times, the measurement errors would have led to a range of values for the speed of sound, perhaps similar to the range shown in the histogram in the following figure. Each vertical bar in the figure gives the number of times that the measured sound speed falls within a 1 m/s range. The vertical bar centered at the value of 1435 m/s reported by Colladon and Sturm (arrow) shows that the measured value fell between 1434.5 and 1435.5 m/s seven times in this particular set of 100 simulated measurements, for example. 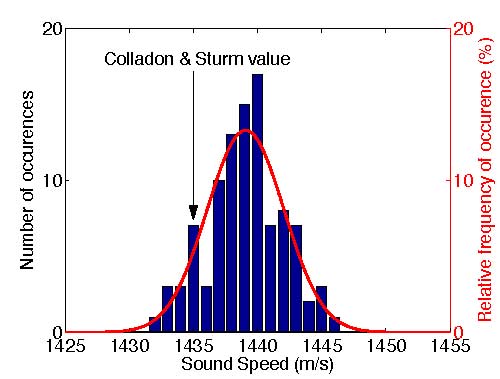 Histogram showing the number of times (left axis) that the measured sound speed might have fallen within 1 m/s intervals if the Colladon and Sturm experiment were repeated 100 times, constructed using a rough estimate of the uncertainties in their measurements. If the measurements were repeated many more times, the histogram would eventually approximate the smooth curve showing the relative frequency of occurrence in percent (right axis) with which the sound speeds specified on the horizontal axis would be observed for the uncertainties in the measurements assumed to construct the histogram.

The standard deviation of the mean specifies the statistical uncertainty of the estimate of the mean, due to the limited accuracy and precision of the measurements. This set of simulated measurements gives the value of sound speed in fresh water at 8°C and atmospheric pressure as 1439.09 ± 0.31 m/s. This means that the true value of the mean is likely to fall within a range of values 0.31 m/s above or below the calculated mean of 1439.09 m/s.

Modern experiments in which sound speed is measured in the laboratory are much more accurate than the experiment that Colladon and Sturm conducted in Lake Geneva, but the measurements are still not perfect. The modern “true” value is also uncertain and is most properly written as 1439.07 ± 0.05 m/s.