Commercial ships carrying a wide variety of cargos travel the world ocean. Ships’ propulsion systems and other machinery generate underwater noise. Cavitation that occurs at the propeller blade tips is a particularly significant source of noise. Cavitation takes place when the rotating blades cause the local pressure in water to drop below a critical value and bubbles to form. In addition, flow past the ship’s hull generates broadband sound, particularly at higher ship speeds. The amount of noise produced depends on numerous factors, including ship type, size, hull shape, propulsion system, ship speed, ship load, and sea conditions.

Most of the noise ships produce is at low frequencies (roughly 20–500 Hz). Measurements on modern commercial ships give broadband source levels (20–1000 Hz) as high as 188 dB re 1µPa @ 1 m for a 54,000 gross ton container ship traveling at 21.7 knots (11.2 m/s) (McKenna et al., 2012). When a large ship passes close to a receiver, the noise that is generated will therefore temporarily increase the sound levels at that location substantially. Even in the absence of a nearby ship, in many places in the ocean, the background sound level at low frequencies is dominated by noise from distant ships because low-frequency sound can travel long distances underwater. Seismic surveys, in which air guns are used to explore for oil and gas beneath the seafloor, can also make significant contributions to the background sound levels at low frequencies in some locations. 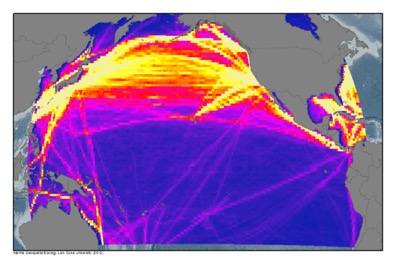 The average annual distribution on a 0.1º by 0.1º grid of large commercial ships (specifically cargo ships and tankers greater than 500 gross tons). The data were collected from October 2004 to September 2005. Image credit: NOAA, https://cetsound.noaa.gov/sound_data.

The amount of low-frequency noise is greater in regions with heavy shipping traffic. The figure to the right shows an estimate of the average number of large commercial ships (specifically cargo ships and tankers greater than 500 gross tons) per 0.1º latitude by 0.1º longitude square in the Pacific Ocean derived from the World Meteorological Organization Voluntary Observing Ships Scheme (VOS).  Common shipping routes are clearly evident in the figure. There tend to be fewer ships in the southern hemisphere, and low-frequency ambient noise levels are substantially lower than in the northern hemisphere as a result. 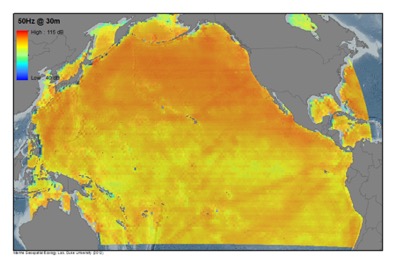 Average annual noise level in the Pacific Ocean in dB re µPa2/Hz for a frequency of 50 Hz and at 30 m depth due to large commercial ships. Image credit: NOAA, https://cetsound.noaa.gov/sound_data.

To make accurate predictions of the expected background noise levels and characteristics caused by shipping, the contributions of many individual ships must be considered. Information on the distribution, density, and acoustic characteristics of the ships is needed. In addition, information on sound-speed profiles, bathymetry, and seafloor properties is needed in order to calculate how sound travels from the location of each ship to the location at which the background noise level is being computed. The U.S. Navy, as well as other navies, have long made such predictions. More recently, similar predictions have been made to help assess the potential effects of the sound generated by shipping on marine life. In particular, the U.S. National Oceanic and Atmospheric Administration (NOAA) convened the cetaceans and sound (CetSound) project to develop underwater sound field and cetacean density and distribution mapping tools. The predicted annual average noise levels in the Pacific Ocean for a frequency of 50 Hz and at 30 m depth due to large commercial ships are shown in the above figure (to the left).

Changes in shipping noise over time

Prior to the mid-19th century Industrial Revolution, low-frequency sound in the ocean was due to spray and bubbles associated with breaking waves, sounds generated by marine life, seismic noise, and other natural sounds. The Industrial Revolution marked the beginning of the use of powered (rather than sailing) vessels to transport goods and provide services. Increases in commercial shipping since that time have caused low-frequency noise levels to increase in many oceanic locations.

The following figure shows that the world’s commercial fleet approximately tripled in number and the gross tonnage (size) of vessels increased by more than a factor of six from 1955 to 2005. 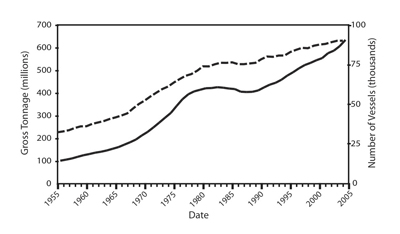 However, because of changes in ship design, increases in the number and tonnage of vessels are not directly related to increases in ship-traffic noise. Radiated noise depends on multiple factors such as ship size, speed, horsepower, propeller depth, etc. All of these characteristics have changed over time. Direct measurements of low-frequency ambient noise are therefore required in order to determine long-term trends. 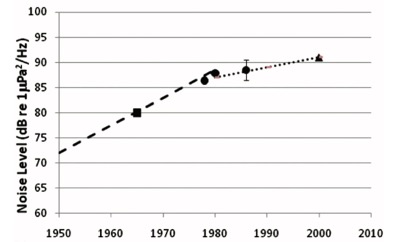 The most recent published measurements in the Northeast Pacific show complex changes in low-frequency ambient noise along the west coast of the United States from 1997 to 2007. Some locations and frequencies had slight increases, others showed little change, and some showed slight decreases, despite increases in the number and size of ships [3] Andrew, R. K., Howe, B. M., & Mercer, J. A. (2011). Long-time trends in ship traffic noise for four sites off the North American West Coast. The Journal of the Acoustical Society of America, 129(2), 642–651 https://doi.org/10.1121/1.3518770 .

Measurements made in the Northwest Atlantic Ocean over the period 1950 to the early 1970s suggested that sound levels at 50 Hz were increasing at roughly the same rate as seen in the Northeast Pacific (0.55 dB/year), although there was considerable scatter in the data [4]Ross, D. (1974). Ship sources of ambient noise. In Proceedings of the International Workshop on Low-Frequency Propagation and Noise (pp. 257–261). (Reprinted in: IEEE Journal of Oceanic Engineering, 30(2), 257–261 (2005)).

However, comparisons between measurements made south of Bermuda in 1966 and 2013–2014 showed that monthly average sound levels at 44 Hz increased by only 2.8 ±0.8 dB over this entire period (0.06 dB/year) [5]Širović, A., Hildebrand, J. A., & McDonald, M. A. (2016). Ocean ambient sound south of Bermuda and Panama Canal traffic. The Journal of the Acoustical Society of America, 139(5), 2417–2423. https://doi.org/10.1121/1.4947517 . This low level of increase may be due to shielding of the measurement location by the local bathymetry. The Panama Canal Expansion Project that was completed in 2016 will enable the transit of larger ships through the Canal at twice the previous rate and may lead to increases in shipping traffic noise to the south of Bermuda. 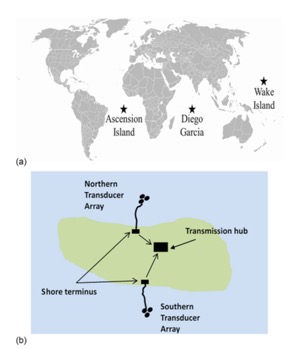 In the Indian Ocean at Diego Garcia, the median broadband (5–115 Hz) sound level to the south of the island increased from 2002 to 2012 by 0.17 dB/year (1.7 dB/decade). The largest increase was at 85–105 Hz, where the median increased by 0.28 dB/year (2.8 dB/decade). Smaller increases were seen at the receivers north of the island. The major ocean shipping lanes run from the Strait of Malacca to Djibouti (north basin crossing) and from the Strait of Malacca to the Cape of Good Hope (cross basin crossing). Although the northern shipping lane has a higher density of shipping than the cross-basin lane, the cross-basin route passes closer to Diego Garcia on the south side, suggesting that the greater increases in sound levels seen to the south of the island are in part related to increased shipping.

The time series at the CTBTO hydroacoustic monitoring stations in the South Atlantic at Ascension Island and in the Equatorial Pacific at Wake Island were somewhat shorter than those available in the Indian Ocean at Diego Garcia, with approximately 8 years of data at Ascension (2004–2012) and 5.5 years of data at Wake (2007–2012). The median broadband (5–115 Hz) sound levels showed no significant change to the north of Ascension Island and actually decreased slightly to the south (–0.08 dB/year). They also decreased to both the north and south of Wake Island (–0.2 dB/year). Neither location is close to any major shipping lane. The dominant source observed in the South Atlantic was seismic air gun signals, while shipping and biologic sources contributed more in the Equatorial Pacific [10]Miksis-Olds, J. L., & Nichols, S. M. (2016). Is low frequency ocean sound increasing globally? The Journal of the Acoustical Society of America, 139(1), 501–511. https://doi.org/10.1121/1.4938237 .