Right whales (Eubalaena sp.) are baleen whales found in the temperate to subpolar latitudes throughout the global ocean. Southern right whales have a circumpolar distribution in the Southern Hemisphere, with major breeding populations along the coasts of South Africa, Argentina, Chile, Peru, Brazil, southern Australia, and the oceanic islands of New Zealand. Right whales received their name from whalers, which considered them the “right” whale to hunt because they swim rather close to shore, float when dead, and produce a large amount of oil when harvested. Right whale numbers were critically low world-wide at the beginning of the 20th century, following hundreds of years of hunting. Whaling largely ceased by the 1930s; however, modern day populations of the North Atlantic (Eubalaena glacialis) and North Pacific (Eubalaena japonica) right whales remain critically endangered. Southern right whales are less endangered and have higher population numbers (about 7,500 animals) than the North Atlantic (about 450) and North Pacific (less than 100) right whales. Current threats to right whales include fisheries entanglement, ship strike, habitat degradation, and shifts in prey distribution. 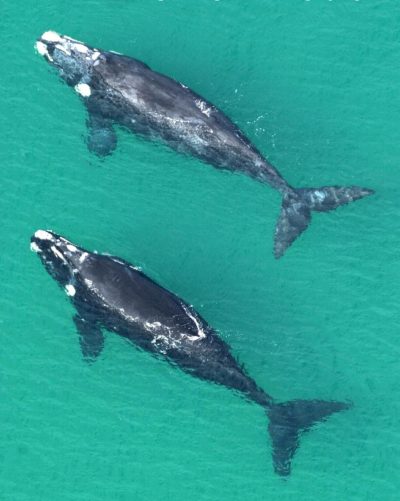 Southern right whales have a robust body shape, with girth sometimes exceeding 60% of total body length. Calves are 4.5–6 m long at birth; typical adults are 13–16 m, and at the extreme may reach 18 m and over 100 metric tons. Image © State of Victoria (Department of Environment, Land, Water and Planning).

Right whale species are differentiated based on their genetics, because morphology across species is very similar. Like other right whales, southern right whales have a thick, black body with no dorsal fin. Their head comprises about one-quarter to one-third of their total body length, and is covered by callosities. The whales use their long baleen plates (2–2.8m long) to feed on krill, copepods, and other zooplankton.

The acoustic repertoire of right whale species is also similar, comprised of a variety of short, low frequency (<1000 Hz) vocalizations. Sounds differ based on behavior and group composition. The most documented vocalization for all right whales is the upcall, a short, tonal sweep that ascends in frequency. This vocalization is produced by males and females of all age classes and is thought to be their primary contact call. Depending on population/geographic location, upcalls in southern right whales begin anywhere between 65 and 120 Hz, and end between 144 and 214 Hz. The call’s duration is between 0.60 and 1.49 seconds. North Atlantic right whales have been found to produce upcalls that start and end at higher frequencies, and cover a larger bandwidth, when compared to that of southern right whales. North Atlantic right whales are thought to inhabit nosier waters due to shipping, which is significantly less in the southern hemisphere (Parks et al 2007, Webster et al. 2016).