How is sound used to measure waves in the surf zone? 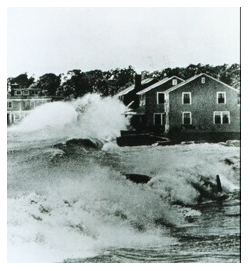 Waves generated in distant storms roll across the ocean, eventually reaching shore. As the water becomes shallow, the waves break, spraying foam and running up on the beach. Nearby beaches can have very different kinds of surf. For example, Black’s Beach, near San Diego, is a world-renowned surfing spot with powerful waves, while just a few miles down the coast, La Jolla Shores Beach usually has gentle waves suitable for scuba divers, kayakers, and beginning swimmers. How can the surf be so different at beaches so close together? Understanding beaches and the surf zone is vital to coastal development and living wisely along the coast. About half of the U.S. population lives in coastal counties.

The surf zone is a complex place. Breaking waves create currents that run offshore (rip currents) and other currents that flow along the beach (alongshore flows). The direction that incoming waves travel changes as the water depth changes. The waves are reflected and refracted because the speed at which the waves move depends on water depth. (Ocean surface waves have much in common with sound waves, which are reflected [How does sound move? Reflection] and refracted [How does sound move? Refraction] as the speed of sound changes.) 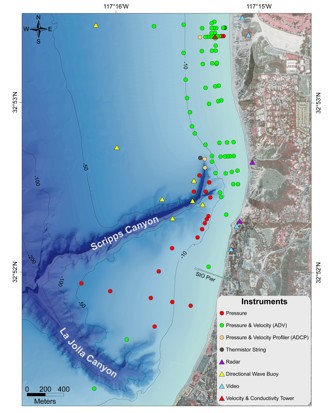 Acoustic Doppler Current Profilers (ADCPs) and Acoustic Doppler Velocimeters (ADVs) both measure the speed and direction of ocean currents by measuring how the frequency of a sound changes as it reflects from a moving object. ADCPs are used to measure ocean currents and how they vary with depth over distances extending up to several hundred meters away from the instrument. (for more, please see: Technology Gallery: Acoustic Doppler Current Profilers and How is sound used to measure currents in the ocean?). In the Nearshore Canyon Experiment, ADCPs were installed just above the seafloor seaward of the surf zone. They looked upward to measure currents throughout the water column. ADVs measure the current in a small volume, making them useful to study small-scale, turbulent currents such as those in the surf zone. They can be designed to measure only horizontal currents (2-axis) or currents in both the horizontal and vertical (3-axis). 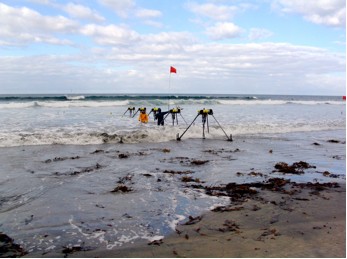 Scientists check the stability of the huge tripods used to support Acoustic Doppler Velocimeters and pressure gauges in the surf zone. The tripods were covered and uncovered by the rise and fall of the tides. Acoustic Doppler Velocimeters were used to measure the direction of the flowing water in three dimensions. Pressure gauges were used to measure wave heights-derived from the weight of water above the instrument. (Image courtesy of Tim Maddux, Oregon State University)

When waves arrive from the northwest, the measurements showed that the extremely rapid change in water depth at Scripps Canyon changes the direction of the waves, redirecting them toward Black’s Beach (large curved arrow in figure below). These waves combine with the waves arriving directly from the northwest (straight arrows in figure below) to cause exceptionally high waves at Black’s Beach. At La Jolla Shores Beach, the waves are low because Scripps Canyon redirects them toward Black’s Beach. 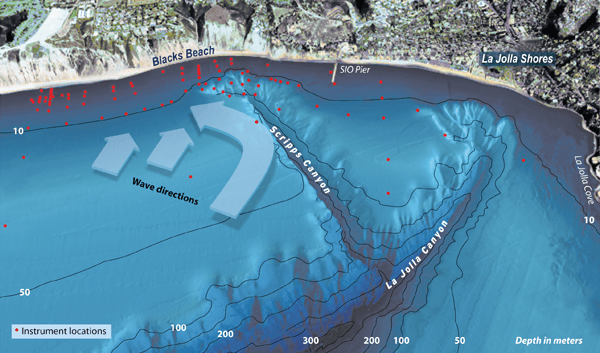