Locations can be described by visible features called landscapes. For example, Hawaii’s landscape includes volcanic islands, tropical forests, and coral reefs. Paris’s landscape includes the Eiffel Tower. Another way to describe locations is by their soundscape. Soundscapes are “acoustic landscapes” consisting of the perceptible sound sources arriving at the location of an animal or acoustic recorder[1]Pijanowski, B. C., Farina, A., Gage, S. H., Dumyahn, S. L., & Krause, B. L. (2011). What is soundscape ecology? An introduction and overview of an emerging new science. Landscape Ecology, 26(9), 1213–1232. https://doi.org/10.1007/s10980-011-9600-8.. However, the definition of this term, as it is currently applied to underwater acoustic features, is still being debated, as discussed below.

The concept of soundscapes was pioneered by the World Soundscape Project, led by R. Murray Schafer[2]Schafer, R. M. (1969). The New Soundscape: A Handbook for the Modern Music Teacher. Berandol Music Limited.[3]Schafer, R. M. (1977). The tuning of the world (1st ed). A. A. Knopf and has an urban origin in in-air acoustics that focused on how humans experience the environment[4]Kang, J., Aletta, F., Gjestland, T. T., Brown, L. A., Botteldooren, D., Schulte-Fortkamp, B., Lercher, P., van Kamp, I., Genuit, K., Fiebig, A., Bento Coelho, J. L., Maffei, L., & Lavia, L. (2016). Ten questions on the soundscapes of the built environment. Building and Environment, 108, 284–294. https://doi.org/10.1016/j.buildenv.2016.08.011.. It was developed to describe the way in which sounds are perceived at any given time and location. This approach contrasted with the conventional measurements at the time, which only described the quantifiable acoustic properties of the sound field and did not include the neural processing of those signals by an animal[5]Truax, B., & Barrett, G. W. (2011). Soundscape in a context of acoustic and landscape ecology. Landscape Ecology, 26(9), 1201–1207. https://doi.org/10.1007/s10980-011-9644-9. The soundscape concept is important for understanding how sound can affect health and the quality of life.

At present the definition for soundscape underwater differs from that established for in-air acoustics, with separate international standards for in-air noise and underwater acoustics. The International Standards Organization (ISO) Technical Committee on Acoustics established two subcommittees. The Noise Subcommittee defined soundscapes in-air as the “acoustic environment as perceived or experienced and/or understood by a person or people, in context” (ISO 12913-1:2014). The Underwater Acoustics Subcommittee defined underwater soundscapes as “characterization of the ambient sound in terms of its spatial, temporal and frequency attributes, and the types of sources contributing to the sound field” (ISO 18405:2017). The underwater acoustics definition does not include elements of perception because of the uncertainty in knowledge of how marine animals process and understand sounds[6]Miksis-Olds, J.L., B. Martin, & P.L. Tyack. (2018). Exploring the ocean through soundscapes. Acoustics Today 14(1): 26-34. https://acousticstoday.org/exploring-ocean-soundscapes/..

At present, there are no standard metrics for characterizing underwater soundscapes. One set of metrics has been implemented by the Atlantic Deepwater Ecosystem Observatory Network (ADEON), which is collecting multi-year measurements of underwater soundscapes on the outer continental shelf of the United States[7]Ainslie, M. A., Miksis-Olds, J. L., Martin, B., Heaney, K., De Jong, C. A. F., von Benda-Beckmann, A. M., & Lyons, A. P. (2018). ADEON Underwater Soundscape and Modeling Metadata Standard. Version 1.0. Technical report by JASCO Applied Sciences for ADEON Prime Contract No. M16PC00003..

ADEON’s proposed standardized metrics for amplitude include the root-mean-square pressure and the peak pressure (also called the 0-to-peak pressure). For specifics on how to calculate these metrics, please visit Introduction to Signal Levels. To characterize how underwater soundscapes change over time, ADEON suggests that observations be segmented into “windows” with varying durations based on research questions being addressed[8]Ainslie, M. A., Miksis-Olds, J. L., Martin, B., Heaney, K., De Jong, C. A. F., von Benda-Beckmann, A. M., & Lyons, A. P. (2018). ADEON Underwater Soundscape and Modeling Metadata Standard. Version 1.0. Technical report by JASCO Applied Sciences for ADEON Prime Contract No. M16PC00003..

Another approach for describing underwater soundscapes uses noise budgets. This type of analysis assumes that various sound sources contributing to the sound field can be identified, typically by the frequency range in which they occur. The contribution of each source to the underwater soundscape is ranked based on various measures of dominant acoustic parameters. For example, the noise budget presented below for the Ionian Sea, near Greece, is characterized by acoustic intensity averaged over the time period January 10, 2004 to April 17, 2004 within the 1/3-octave band centered at 500 Hz. The data showed that at frequencies around 500 Hz, the underwater soundscape was dominated by wind-generated sound, followed by shipping sound, and finally by sound generated by rain[9]Miller, J. H., Nystuen, J. A., & Bradley, D. L. (2008). Ocean Noise Budgets. Bioacoustics, 17(1–3), 133–136. https://doi.org/10.1080/09524622.2008.9753791.. 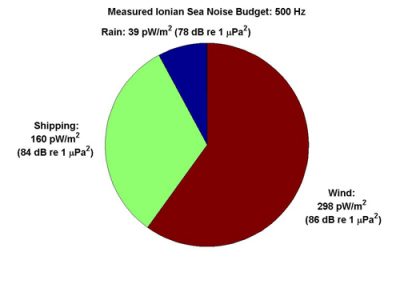 Animals may also use features of underwater soundscapes. Several studies showed that the larvae of coral reef fishes and invertebrates use a combination of visual, chemical, and acoustic cues to orient to suitable reef habitats on which they can settle and develop into adults.