How is sound used to study the distribution of marine fishes?

Many fishes use sound to attract mates for courtship and spawning. Typically it is the males that produce species-specific low frequency (<500Hz) sounds via the swim bladder – sonic muscle mechanism. Many fishes form large chorusing aggregations nightly during the spawning season and collectively produce sounds well above background levels. Scientists can listen to the nightly vocalizations, identify the species, and document the time and location where spawning occurs. Much of the early work on this topic was conducted by Marie Poland Fish and William H. Mowbray in the northwest Atlantic.

Fishes of the Family Gadidae, including cod and haddock, are important in fisheries. Vocalizations by these fishes have similar frequency ranges, but different pulse characteristics. Scientists have used passive acoustics to discover a large spawning aggregation of haddock in an Arctic fjord in northern Norway. This is the first nearshore spawning site documented for this species. 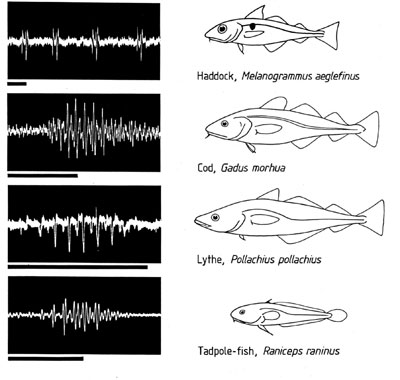 Fishes of the Family Gadidae can be recognized by the unique vocalizations each species produces. Image courtesy of Dr. Rodney Rountree.

In Florida and elsewhere, researchers have accurately described the calls of the dominant sound producing species and used this information to study the time and location of spawning. For example, in a Florida estuary, sounds produced by fishes from the Family Sciaenidae show distinct seasonal cycles. The species are also located in specific areas and have been found to use those same areas for over 20 years.

Scientists have used the distinct vocalizations made by species of the Family Sciaenidae to study the time and location of their spawning behaviors. The number of vocalizations in each month of the year is shown in a different color for each species (left). The same colors show the spawning locations of the species in a Florida estuary (right). Images courtesy of Dr. Rodney Rountree.

Passive acoustic data can be also used to show how the use of spawning habitat changes over time in relation to many variables. For example, many coastal areas continue to be rapidly developed, altering the habitat and changing how rivers flow into estuaries. Time series data on fish sound production may show a change in spawning behavior or location to such habitat changes. This would provide valuable information to resource managers overseeing the effects of development and natural resource policies on the marine environment.

Additionally, passive acoustic data on spawning fishes can be used to select the boundaries for marine protected areas (MPA). For example, many species of grouper, a commercially important family of fishes, form spawning aggregations in offshore waters and near reefs. Passive acoustics can be used to determine the timing and location of spawning and if the same locations are used year after year (spawning site fidelity).

Benefits of Passive Acoustics- from MIT Seagrant “Listening to Fish”