How does sound travel in very shallow waters? 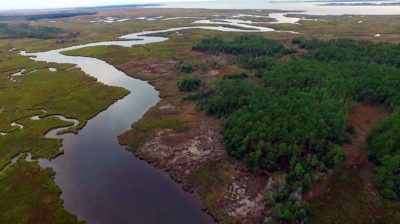 Shallow waters have special acoustic propagation properties, which is discussed in the Advanced Topic on shallow water propagation. As compared to deeper water, propagation in these environments is generally characterized by extensive, complex interactions with both the water surface (the air-water interface) and the seafloor, resulting in reflection and scattering.

A particularly interesting subset of shallow water environments includes rivers and estuaries, which are very shallow (often < 20 m) and have significant inputs of freshwater. Propagation of sound in these particular environments is often complex, because of both highly varying bathymetries and interactions between waters with very different characteristics (e.g. salinity, sediment load, and temperatures). For example, as tides move in and out of estuaries, and rivers contribute freshwater, saltwater and freshwater mix, and thereby affect the temperature and salinity of the water.

Estuaries are dynamic environments due to extensive interaction between freshwater from rivers and saltwater from the ocean. The resulting mixing and stratification create variations in temperature and salinity which in turn creates strong variations in sound speed over space and time. Estuaries can be well mixed, highly stratified, or a combination of both. In a highly stratified estuary, distinct surface and bottom water layers form. The surface layer is primarily composed of less dense freshwater river flow, which can be further influenced by precipitation. The bottom layer consists of denser seawater flow and is sometimes called a salt wedge.

Ocean water forms a wedge-shaped mass of salty water that flows upstream along the estuary bottom. Lower salinity, low density river water flows over the top of the higher-salinity ocean water. River and ocean water gradually mix along the length of an estuary, creating a gradient of increasing salinity. Image credit (adapted from): John ter Borg, University of British Columbia, 2014.

The figure below shows both of these scenarios, where the dashed black line in both panels indicates the transition zone between the surface and bottom layers. The top panel shows a sound source in the surface layer, which results with sound propagating primarily within the surface layer. The bottom panel shows a sound source in the bottom layer, where interactions with the seafloor reduce the sound propagation range. 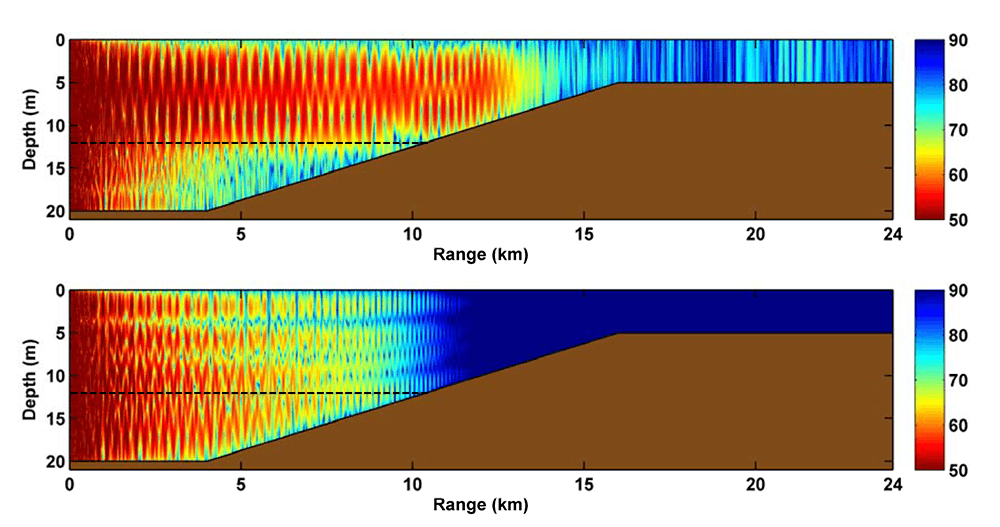 Model of transmission loss (TL) in dB as a function of range and depth for a 1 kHz source at water depths of 4 m (top) and 18 m (bottom) at the mouth of a river. The black line represents the center of the idealized salt wedge sound speed gradient (over 6m) separating well-mixed fresh river water above and well-mixed denser ocean water below. Reproduced from Reeder, D. B. (2013). Acoustic propagation characteristics of the estuarine salt wedge. Proceedings of Meetings on Acoustics, 19(1), 005004, with the permission of the Acoustical Society of America.

In contrast with estuaries, rivers do not have stratification caused by salinity differences, and thus have a constant speed of sound. As a result, propagating sound interacts extensively with both the surface and bottom. However, compared with other shallow water environments, sound in rivers has additional attenuation losses that can occur as it interacts with riverbanks. With sound absorption occurring at the sides and bottom of rivers, the dominant path for sound to travel in rivers is parallel to the river banks. Rivers can also display temperature stratification, which may lead to acoustic effects similar to that described above for a salt wedge.