Anthropogenic (human-made) sounds may affect the behavior of marine mammals. The occurrence and significance of a behavioral change varies by individual, species, and circumstances. Some sounds may not cause any response, while others may result in minor to significant changes in a variety of behaviors, such as diving, surfacing, vocalizing, feeding, and/or mating. For example, sperm whales and pilot whales stopped vocalizing during transmissions of the Heard Island Feasibility Study sound source[1]Bowles, A. E., Smultea, M., Würsig, B., DeMaster, D. P., & Palka, D. (1994). Relative abundance and behavior of marine mammals exposed to transmissions from the Heard Island Feasibility Test. The Journal of the Acoustical Society of America, 96(4), 2469–2484. https://doi.org/10.1121/1.410120. Based on research of behavioral responses of Blainville’s beaked whales to Navy sonar, scientists developed a risk function that predicts that half of the individuals in the Blainville’s beaked whale population would stop foraging at received level of 150 underwater dB, but that the other half of the population would continue feeding[2]Moretti, D., Thomas, L., Marques, T., Harwood, J., Dilley, A., Neales, B., … Morrissey, R. (2014). A risk function for behavioral disruption of blainville’s beaked whales (Mesoplodon densirostris) from mid-frequency active sonar. PLoS ONE, 9(1), e85064. https://doi.org/10.1371/journal.pone.0085064. Marine mammals have also been shown to learn to use anthropogenic signals for their benefit, as grey seals learned that the sound produced by acoustic fish tags indicated the location of a food source[3]Stansbury, A. L., Gotz, T., Deecke, V. B., & Janik, V. M. (2014). Grey seals use anthropogenic signals from acoustic tags to locate fish: evidence from a simulated foraging task. Proceedings of the Royal Society B: Biological Sciences, 282(1798), 20141595–20141595. https://doi.org/10.1098/rspb.2014.1595.

To best understand how anthropogenic sounds may impact marine life, observations of normal behavior, “control” or “baseline” data, are needed to determine the range of natural variability as well as whether any changes occurred during or after sound exposure. (see How do you determine if a sound source might affect a marine animal?)

Behavioral responses depend on a number of factors, including an individual animal’s hearing sensitivity, tolerance to noise, exposure to the same noise in the past, behavior at the time of exposure, age, sex, and group composition[4]National Research Council (U.S.) (Ed.). (2003). Ocean noise and marine mammals. Washington, D.C: National Academies Press..

Not all changes in behavior are cause for concern. Some marine animal responses are momentary inconsequential reactions, such as the turn of a head. Other responses are within natural variation. In response to Acoustic Thermometry of Ocean Climate (ATOC) sounds, humpback whales slightly increased their average dive time and underwater travel distance as the received level was increased. However, these changes were well within the range of dive times and distances observed in the absence of ATOC transmissions[5]Frankel, A. S., & Clark, C. W. (1998). Results of low-frequency playback of M-sequence noise to humpback whales, Megaptera novaeangliae , in Hawai′i. Canadian Journal of Zoology, 76(3), 521–535. https://doi.org/10.1139/z97-223[6]Frankel, A. S., & Clark, C. W. (2000). Behavioral responses of humpback whales ( Megaptera novaeangliae ) to full-scale ATOC signals. The Journal of the Acoustical Society of America, 108(4), 1930–1937. https://doi.org/10.1121/1.1289668[7]Frankel, A. S., & Clark, C. W. (2002). ATOC and other factors affecting the distribution and abundance of humpback whales (Megaptera novaeangliae) off the north shore of Kauai. Marine Mammal Science, 18(3), 644–662. https://doi.org/10.1111/j.1748-7692.2002.tb01064.x. Further, there was no difference in humpback whale sighting rate (number of animals seen per kilometer searched) or distributions between a year when the source was off and two years when the source was on[8]Mobley, J. R. (2005). Assessing responses of humpback whales to North Pacific Acoustic Laboratory (NPAL) transmissions: Results of 2001–2003 aerial surveys north of Kauai. The Journal of the Acoustical Society of America, 117(3), 1666–1673. https://doi.org/10.1121/1.1854475.

In another example, sounds of the Surveillance Towed Array Sensor System Low Frequency Active (SURTASS LFA) sonar were played to singing humpback whales off Hawaii. The whale songs were 29% longer during transmissions and remained 10% longer up to two hours after exposure[9]Fristrup, K. M., Hatch, L. T., & Clark, C. W. (2003). Variation in humpback whale (Megaptera novaeangliae) song length in relation to low-frequency sound broadcasts. The Journal of the Acoustical Society of America, 113(6), 3411. https://doi.org/10.1121/1.1573637. Even though the songs were longer on average, the two graphs look similar and show that there is considerable variation in the length of humpback whale songs.

In other cases, more significant changes in behavior have been observed. For example, beluga whales stopped feeding and swam rapidly away from approaching ice-breaking vessels. The whales traveled up to 80 km away from productive feeding areas and remained there for 1-2 days before returning[10]Finley, K. J., Miller, G. W., Davis, R. A., & Greene, C. R. (1990). Reactions of belugas and narwhals to ice breaking ships in the Canadian high arctic. Canadian Bulletin of Fisheries and Aquatic Science, 224, 97–117.. Some of the strongest reactions occur when the sounds are similar to those made by predators. Harbor seals responded to playbacks of mammal-eating killer whale and unfamiliar fish-eating killer whales[11]Deecke, V. B., Slater, P. J. B., & Ford, J. K. B. (2002). Selective habituation shapes acoustic predator recognition in harbour seals. Nature, 420(6912), 171–173. https://doi.org/10.1038/nature01030, but did not respond to familiar calls of fish-eating killer whales. (For more information on killer whale calls see group-specific vocalizations). This also suggests that animals can become accustomed to sounds that appear harmless by learning from previous experiences and stop responding to them or habituate. 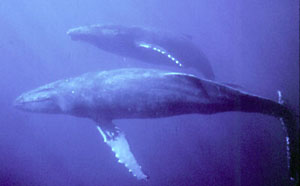 Sometimes it is difficult to know whether observed changes in behavior are due to sound or to other causes. Manatees reduced their use of specific areas when continually disturbed by boats[12]Provancha, J. A., & Provancha, M. J. (1988). Long-term trends in abundance and distribution of manatees (Trichechus manatus) in the northern Banana River, Brevard County, Florida. Marine Mammal Science, 4(4), 323–328. https://doi.org/10.1111/j.1748-7692.1988.tb00541.x. Similarly, gray whales left a breeding lagoon in Baja California during extensive industrial activity and returned to the lagoon when the shipping decreased[13]Gard, R. (1974). Aerial census of gray whales in Baja California lagoons, 1970 and 1973, with notes on behavior, mortality and conservation. California Fish and Game, 60(3), 132–143.. It is not known whether these disturbances were related to increased anthropogenic sound levels or to the physical presence of increased numbers of boats.

How these short-term, individual effects may result in population-level effects is also being studied. The Population Consequences of Acoustic Disturbance (PCAD) model is a conceptual framework to structure future studies to investigate if and when measurable short term responses of marine mammals result in ‘biologically significant‘ or meaningful effects on individuals and/or populations. This framework demonstrates how behavioral responses to sound (e.g., diving, resting, orientation, changes in vocalizations) may affect life functions (e.g., feeding, breeding, migrating), how these are linked to vital rates (e.g., adult survival, reproduction), and how that may result in population changes (e.g., through growth rate, population structure, or extirpation).
The content on DOSITS is based on well-understood scientific principles, peer-reviewed literature, and high quality sources of scientific data. Independent experts who specialize in underwater acoustics have reviewed the material in this section.