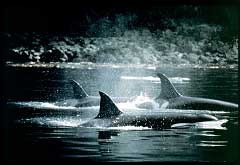 The orca or “killer whale” is found throughout the ocean, from the arctic to the antarctic. These odontocetes are easily identified by their striking black and white coloration and tall dorsal fin, up to 1.8 m (6 ft) high in males. The males can grow to about 9.5 m (31 ft) in length and weigh eight to nine tons; the females are smaller, only growing to about 8 m (23 ft) and weighing about four tons. Orcas occur in family groups called pods. Three types of pods have been described. Resident pods remain stable over time, whereas transient pods are constantly changing. Offshore pods are only seen in outer coastal waters and very little is known about them. Pods usually number between 5-30 individuals, and as observed in the U.S. Pacific Northwest, are led by females. As apex predators, orcas do not have natural enemies. They are skilled and efficient hunters and have been given the nickname, “wolves of the sea.” Resident pods prefer to eat fish, whereas transient pods target other marine mammals as prey. Remarkably, orcas have been known on occasion to attack much larger animals, even blue whales.Orcas produce sound for echolocation and communication. Scientists studying the recordings of orcas have shown that a pod will have a specific dialect. These dialects are distinct and unique enough that researchers are able to identify pods based on the sounds that they make. The sounds produced by an orca range from about 0.1 kHz to about 40 kHz. They produce pulsed sounds and clicks at rates of up to 5000 per second. These are often described as sounding like screams or a harsh metallic sound. 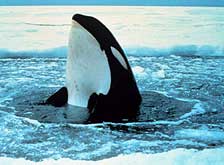