Wind power is one of the fastest growing energy sectors and is the focus of development in many countries around the world, especially in Europe. In 2007, European leaders agreed to source 20% of their energy needs from renewable sources. Wind turbines convert wind energy into electricity. Winds tend to be stronger and more uniform over the ocean than on land, and there are large, potentially productive areas available offshore.

Underwater sounds of varying intensity and duration, are generated during the four stages of a wind farm’s life cycle: 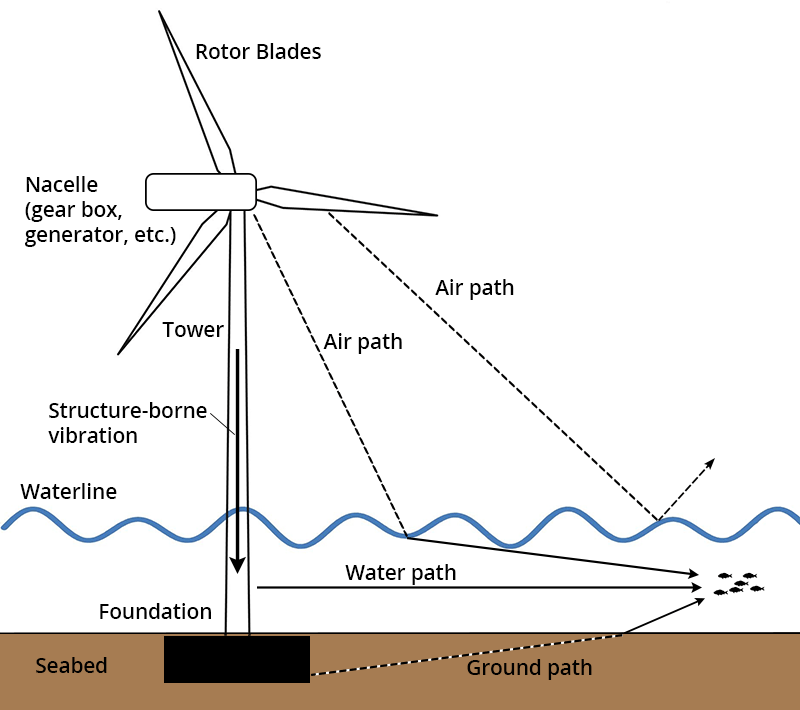 Acoustic pathways for underwater noise from an offshore wind turbine under operation. Kikuchi, R. (2010). Risk formulation for the sonic effects of offshore wind farms on fish in the EU region. Marine Pollution Bulletin, 60(2), 172–177.

During the operational stage of a wind farm, low frequency sound is produced when the blades are spinning. As a turbine operates, vibrations inside the nacelle (the housing that contains the generator, gearbox, and other parts) are transmitted down the main shaft of the wind turbine and into its foundation. These vibrations then propagate into the water column and seafloor. The sound is primarily below 1 kHz (generally below 700 Hz), with a source level of 80-150 dBre 1 µPa @ 1 m. Aerodynamic noise produced by the rotor blades may also enter the water through an airborne path. Sound levels increase slightly as wind speed increases. The type of wind turbine foundation will also affect the transmission of underwater sound. 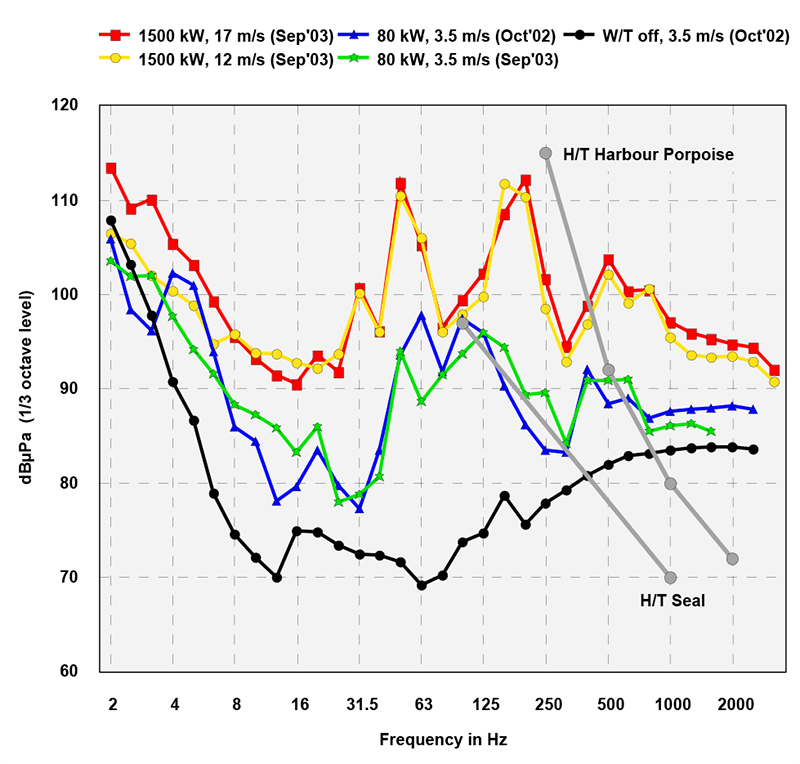 Many offshore wind farms are constructed in coastal waters. Significant growth in offshore wind development has led to concern about the potential for negative impacts on fishes, marine mammals, invertebrates, birds, and bats. Potential negative effects include collision, habitat displacement, and exposure to electromagnetic fields and underwater noise.

Observations indicate underwater sounds produced during the construction phase of offshore wind turbines, especially that of pile-driving, pose a greater potential for physiological and behavioral impact than operational noise [1]Madsen, P., Wahlberg, M., Tougaard, J., Lucke, K., & Tyack, P. (2006). Wind turbine underwater noise and marine mammals: implications of current knowledge and data needs. Marine Ecology Progress Series, 309, 279–295. https://doi.org/10.3354/meps309279.. Pile-driving produces intense underwater sound that can be detected at distance from the source. Underwater sound generated by operating wind turbines is of lower intensity than pile driving, however, and likely to present a smaller impact than construction, albeit for a longer period of time.

There are limited data on long term effects associated with the continual operational noise of offshore wind turbines. The size of the turbines, overall size of the wind farm array, and where it is positioned, all have implications for environmental impact. In addition, cumulative effects associated with multiple wind farms in close proximity to each other, and increased human activities, such as shipping, in the area of the wind farms, are also poorly understood. Additional data are also necessary to understand effects due to long term shifts in prey availability around offshore wind installations.

Effects of noise from offshore wind farms depend on species sensitivity and site conditions. Caution should be exercised in extrapolating local measurements and results from one offshore wind facility to another. Turbine size and technology, foundation type, and the number and spacing of the turbines within the facility, as well as propagation conditions and ambient noise levels of each site, can be different and affect the sounds produced and how far they travel. Substrate type, local marine communities, and human activities before and after wind farm construction are also highly variable. The scale and size of each wind farm is also important to consider; small installations may have very localized effects.

Underwater sound associated with operational wind turbines may be detectable by some fishes. During operation, fishes very close to the turbine may detect the particle motion associated with sound generated. Some fishes may detect sound pressure at somewhat greater distances (on the order of tens of meters).  The primary impact on fishes would be masking and behavioral changes[2] Hawkins, A. D., & Popper, A. N. (2018). Effects of Man-Made Sound on Fishes. In H. Slabbekoorn, R. J. Dooling, A. N. Popper, & R. R. Fay (Eds.), Effects of Anthropogenic Noise on Animals(Vol. 66, pp. 145–177). New York, NY: Springer New York. https://doi.org/10.1007/978-1-4939-8574-6_6.. 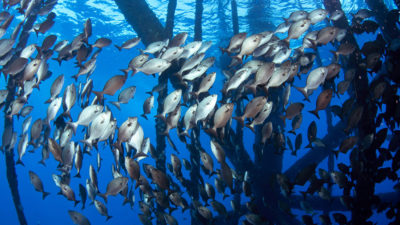 Underwater sounds associated with offshore wind farms do not appear to affect those fishes attracted to turbine foundations for food and protection. Wind farm foundations and additional structures to prevent “scour” (erosion) can lead to increased habitat complexity, which attracts fish and invertebrate species, especially those that prefer hard substrates. This is known as the “reef effect”. Offshore wind farms also create zones where certain human activities, such as commercial fishing, are prohibited, offering further protection.  This is known as the “shelter effect”. Fish abundance has been found to increase in proximity to various offshore wind farms and many fishes have been observed in close proximity to turbine foundations [3]Reubens, J. T., Degraer, S., & Vincx, M. (2014). The ecology of benthopelagic fishes at offshore wind farms: a synthesis of 4 years of research. Hydrobiologia, 727(1), 121–136. https://doi.org/10.1007/s10750-013-1793-1.[4]Stenberg, C., Støttrup, J., van Deurs, M., Berg, C., Dinesen, G., Mosegaard, H., … Leonhard, S. (2015). Long-term effects of an offshore wind farm in the North Sea on fish communities. Marine Ecology Progress Series, 528, 257–265. https://doi.org/10.3354/meps11261.[5]van Hal, R., Griffioen, A. B., & van Keeken, O. A. (2017). Changes in fish communities on a small spatial scale, an effect of increased habitat complexity by an offshore wind farm. Marine Environmental Research, 126, 26–36. https://doi.org/10.1016/j.marenvres.2017.01.009.. One study also showed no negative effect observed on individual health or reproductive performance of eelpouts after five years of operation of the Lilllgrund Offshore Wind Farm in Sweden. No impact on reproductive condition or brood development in female eelpout was observed[6]Langhamer, O., Dahlgren, T. G., & Rosenqvist, G. (2018). Effect of an offshore wind farm on the viviparous eelpout: Biometrics, brood development and population studies in Lillgrund, Sweden. Ecological Indicators, 84, 1–6. https://doi.org/10.1016/j.ecolind.2017.08.035.. Although this study found no physiological differences between eelpouts in the wind farm area and other natural sites investigated, additional long-term measurements are needed at this site and others to fully understand potential effects of continuous wind farm noise on growth and reproduction. This is especially important as larger arrays come online and/or are built in close proximity to other installations. 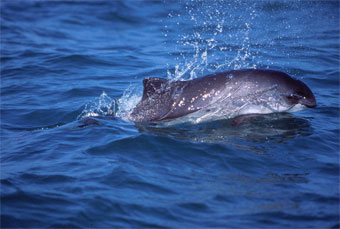 Based on measurements of underwater sound produced by turbines, the impacts from turbine operations on marine mammals are predicted to be minimal to negligible[7]Tougaard, J., Madsen, P. T., & Wahlberg, M. (2008). Underwater noise from construction and operation of offshore wind farms. Bioacoustics, 17(1–3), 143–146. https://doi.org/10.1080/09524622.2008.9753795.. There is little overlap between underwater sounds produced by offshore wind turbines and hearing abilities of harbor porpoises. They may detect sounds from operational wind turbines at ranges of 100 m or less from a turbine’s foundation. Behavioral reactions of porpoise to underwater sounds produced by wind turbines appear unlikely except within very close proximity to turbine foundations[8]Tougaard, J., Henriksen, O. D., & Miller, L. A. (2009). Underwater noise from three types of offshore wind turbines: Estimation of impact zones for harbor porpoises and harbor seals. The Journal of the Acoustical Society of America, 125(6), 3766–3773. https://doi.org/10.1121/1.3117444..  However, harbor seals may detect sounds up to several km. It is unlikely that the operational turbine sounds reach levels sufficient to cause temporary or permanent threshold shifts at any distance from the turbines.

Visual observations of harbor porpoises during (a) preconstruction, (b) construction and (c) operation of the Robin Rigg offshore wind farm (polygon with black outline). Circle size indicates number of individuals recorded per observation (range: 1–6; larger circles indicate more animals sighted), and dashed lines represent transect routes for visual surveys. Harbor porpoise were observed throughout the Robin Rigg study area during all three development phases. However, they were not recorded within the footprint of the wind farm during the construction phase, and were also much less frequent across the entire study areal. Harbor porpoise returned to the study area during operation of the wind farm, with relative harbor porpoise abundance was higher in the south of the study area during the operational phase than the preconstruction and construction phases. Image from Vallejo, et al., 2017[14]Vallejo, G. C., Grellier, K., Nelson, E. J., McGregor, R. M., Canning, S. J., Caryl, F. M., & McLean, N. (2017). Responses of two marine top predators to an offshore wind farm. Ecology and Evolution, 7(21), 8698–8708. https://doi.org/10.1002/ece3.3389.. Used under Creative Commons Attribution 4.0 International license.

However, there is one example in the Baltic Sea of harbor porpoises leaving the area during construction and few animals returning once the wind farm was operational[15]Teilmann, J., & Carstensen, J. (2012). Negative long term effects on harbour porpoises from a large scale offshore wind farm in the Baltic—evidence of slow recovery. Environmental Research Letters, 7(4), 045101. https://doi.org/10.1088/1748-9326/7/4/045101.. The return of harbor porpoise may be linked to primary habitat quality. Results highlight the need to treat offshore wind farms studies independently, and not extrapolate results from one area to the next.
Previous: Sonar
Return to Tutorial Introduction