How does sound move? Wave Propagation and Huygens’ Principle

The behavior of sound waves as they travel through a medium or reflect from an object can be found using a remarkably simple geometrical procedure, Huygens’ Principle. This principle describes how wave fronts move.

Devised by the Dutch scientist Christiaan Huygens in 1678, Huygens’ principle states that each point on an advancing wave front may be considered to be a new point source generating spherical Huygens’ wavelets. If one knows the location of a wave front at one time, one can determine the location of the wave front at a slightly later time by drawing spherical arcs centered at points along the wave front. Each spherical arc is a Huygens’ wavelet. The radius of each arc is given by the distance that sound travels in that small amount of time. As shown in the figure below, the initial wave front is labeled “ t ”. If the sound speed is c (meters/second), then in a small time increment, Δt (seconds), sound travels a distance cΔt (meters). The new wave front, labeled “t + Δt” is simply the envelope of these wavelets of radius c Δt, constructed by drawing the line tangent to the leading edges of the wavelets. 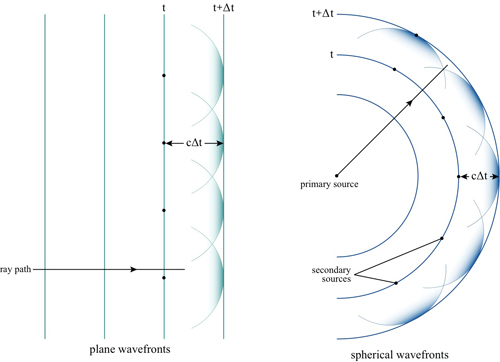 Huygens’ principle can be used to help us understand why the angle of incidence is equal to the angle of reflection when sound reflects from a hard surface. The following figure shows what happens to plane waves traveling toward a reflecting boundary between two media. 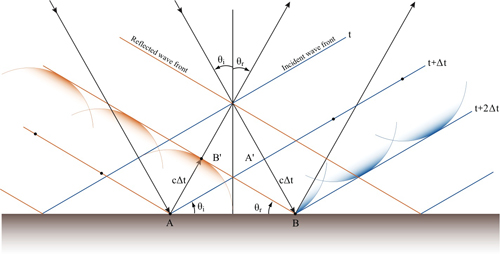 From Huygens’ principle, the two line segments A´B and AB´ both have length cΔt. Therefore,

Huygens’ principle can also be used to help us understand the refraction of sound. It can be used to derive Snell’s Law, which relates the angle of incidence to the angle of refraction when sound travels from one medium into another with a different sound speed. The following figure shows what happens to plane waves traveling toward the boundary between two media with different sound speeds. Some of the sound will be reflected, as above, but some will transmitted through the boundary. For simplicity, in this figure only the energy transmitted through the boundary is shown. 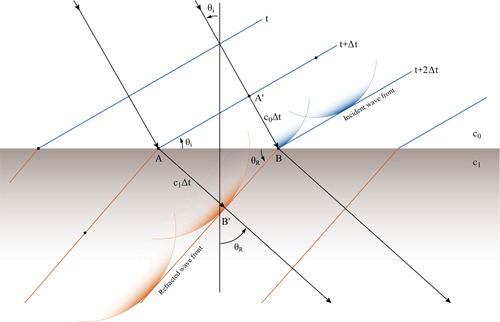 Again using the definition of the trigonometric sine function,

The figure is drawn assuming that c1 is greater than c0 . This case is applicable to the reflection and refraction of sound waves at the seafloor, which typically has a higher sound speed than seawater.