The Comprehensive Nuclear-Test-Ban Treaty (CTBT) banned all nuclear explosions on Earth whether for military or for peaceful purposes. To verify compliance with the treaty, the CTBT includes an extensive International Monitoring System (IMS) to locate all types of nuclear tests (in air, on land, underground, and underwater). The IMS is a network of over 300 monitoring stations, each using one or more of four different techniques designed to detect any nuclear weapons test: seismic stations, infrasonic stations, radionuclide stations, and hydroacoustic stations. 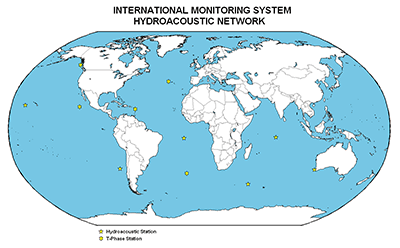 Nuclear tests may produce low frequency underwater sounds which propagate long distances with little transmission loss in the ocean. These sounds can be detected by the IMS system. Eleven IMS hydroacoustic stations are distributed around the global ocean, with a focus on locations in the Southern Hemisphere.

There are two different types of stations used in the IMS hydroacoustic network: six cabled hydrophone stations and five seismic Tertiary wave (or T-phase) stations. Almost all of the hydroacoustic stations are placed on or close to small islands. To prevent signal blockage by the host island, multiple sensor packages are deployed on opposite sides of each island. At the hydrophone stations, each sensor package consists of three hydrophones. To obtain directional information on the source of the signal, the three hydrophones are horizontally arranged in a triangular configuration, with 2 km (6562 ft) between each hydrophone. Directional information is obtained by examining the differences in times of arrival at each of the three hydrophones (triangulation). 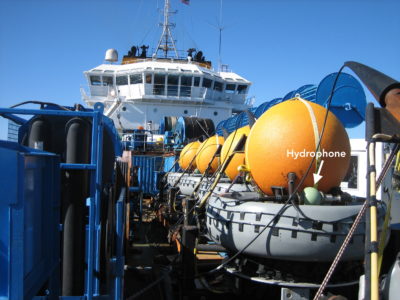 Buoy and riser assemblies for a hydrophone station sit on deck, ready to be deployed. Once the assembly is placed on the seafloor, the subsurface buoy (orange) is released, lifting the riser cable and placing the hydrophone (labeled) into the sound channel. Copyright CTBTO Preparatory Commission.

Each hydrophone is anchored to the seafloor and floated (via subsurface float) at or near the axis of the SOFAR channel, where sound propagates most efficiently. A long cable (tens to hundreds of kilometers depending on bathymetry) connects each hydrophone to its nearby shore station for data transmission and power supply. Each hydrophone station monitors a low frequency band of 1-100 Hz, which is suitable for recording explosions at large distances. The stations are capable of distinguishing potential explosions from other underwater acoustic signals they detect.

The cabled hydrophone stations are very sensitive with directional capability and are able to record signals up to 100 Hz. However, they are difficult to maintain and expensive to install. Thus, five seismic, T-phase stations have also been deployed as part of the IMS hydroacoustic network. These stations use seismometers to record seismic waves at the coastal slope and monitor a frequency band covering 0.5-45 Hz.

Under normal conditions, there are at least 40 signal detections from a variety of sound sources recorded daily at each hydroacoustic station. These hydroacoustic data, as well as any infrasonic, seismic, and radionuclide data from IMS stations, are continuously transmitted in real time via satellite to the International Data Center (IDC) in Vienna, Austria. The CTBT Organization coordinates, maintains, and analyzes all of the data.

In addition to CTBT nuclear monitoring, IMS hydroacoustic data are used by the scientific community to investigate a range of other oceanographic topics, including marine mammal migrations, ocean temperature, tsunamis, and volcanic activity. In 2017, data from the IMS hydroacoustic network even played a role in locating the lost, Argentine submarine, ARA San Juan, which sank off the southeast coast of Argentina during a routine patrol in the South Atlantic. Triangulation of the intense sonic impulse that was generated by the compression and collapse of the submarine’s hull was detected by two IMS hydroacoustic stations, one over 6,000 km away in the mid-Atlantic and the other 8,000 km away in the Southern Indian Ocean.