The sound files were recorded in July 2020 along the Venice inlets connecting the Venice lagoon with the sea. The recordings were obtained using a pre-amplified calibrated Colmar GP1280 hydrophone (sensitivity of −170 dB re 1V/μPa and frequency range of 5–90 kHz) connected to a Tascam Handy Recorder. The hydrophone was lowered from a 7.5 m open boat to an average depth of 4 m. Credit: Marta Picciulin, Department of Environmental Sciences, Informatics and Statistics, Ca’ Foscari, University of Venice, Italy. 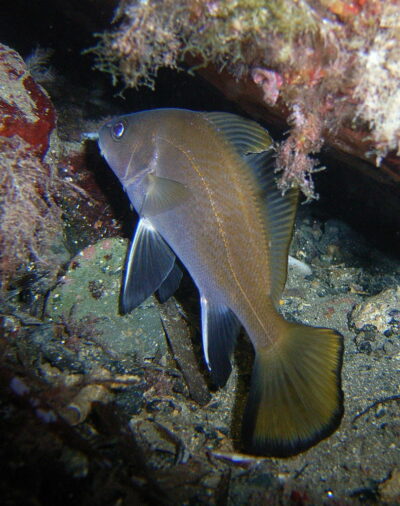 Brown meagre usually measure between 30 and 40 cm (12 and 16 in) in body length. Their grey bodies have a distinct shape, with a strongly arched back and flat belly. Their dorsal and caudal fins are yellow with black edges. Image credit: Yoruno, Italian Wikipedia, released under Creative Commons Attribution-Share Alike 3.0 Unported.

Brown meagre are a commercially valuable fish that occur in shallow (5-200 m), coastal waters in the Eastern Atlantic, from the English Channel to Mauritania, as well as the Mediterranean and Black seas. They live in small groups that prefer rocky-reef habitats, including human-made barriers and other artificial structures. They will also enter estuaries, especially during the spawning season from May to September.

These fish are nocturnal and vocalize from dusk to dawn. Like other members of the Sciaenid family, brown meagre produce sound through the rapid contraction of sonic muscles surrounding the swimbladder (for more information, please see How do fish produce sound?). During the evening, the fish produce low frequency, broadband pulses (described as “knocks”) with a mean dominant frequency of 200–300 Hz. Although the species’ hearing range spans from 100 Hz to 3000 Hz, its best sensitivity matches the peak frequency of the sounds they produce, centering around 300 Hz, both in terms of sound pressure and particle acceleration.

Brown meagre produce pulses in a series (or “train”) to create a call (or “sound”), which may contain up to 19 pulses. These multi-pulsed calls usually occur in three patterns, “regular” (R), “irregular” (I), or “chorus”(C), all of which differ in pulse peak frequency, pulse duration, and pulse period [new glossary: the time between the start of one pulse, and then the start of the next pulse in a series (sometimes called the pulse rate).
R-sounds are comprised of 5–6 pulses with pulse duration of 27 ms and pulse period of 100 ms. There is also a fairly consistent delay of 2000 ms between each pulse train in the R-sounds; these sounds are often described as having a simple, isochronous – metronome-like – rhythm.

I-sounds usually contain four pulses with a pulse duration of 24 ms, and pulse period of 130 ms. These calls lack a fixed repetition rate.
The chorus (C-sounds) consists of a continuous production of pulse trains, that may be overlapping R-sounds produced by many individuals at once. Longer sounds, comprised of 6-7, rapidly repeated pulses, characterizes the chorus. These sounds have been used as a proxy for the occurrence of brown meagre spawning activity.

All three call patterns have been detected during the night-time period, however, they vary temporally. R-sounds occur mainly at dawn and dusk; the chorus begins right after nightfall, peaking around midnight; and I-sounds occur sporadically throughout the night and sometimes in the late afternoon.

Brown meagre sounds are mainly detected during the spawning season from May to September. Thus, the sounds are thought to have a reproductive purpose. Morphological data reinforces this hypothesis as sonic muscles are found only in male brown meager.

Due to commercial and recreational overfishing and habitat degradation, brown meagre populations are in decline. The fish also live in areas dominated by small boat activities that increase during the summer months, coincident with the spawning season. Underwater sounds associated with small boat activity may overlap with the acoustic communication signals of brown meagre and interfere with the detection of conspecific sounds. On the other hand, the species usually shows little change in activity levels as a consequence of boat noise . Some brown meagre spawning locations are in high areas of boating activity; site selection is not influenced by boat-induced pressures.

Researchers and managers have found passive acoustic monitoring (PAM) to be an effective non-invasive tool to follow S. umbra populations over different spatial and temporal scales ; this is feasible even in presence of closely related vocal sciaenids, partially overlapping in their ecological niche, as the shi drum.